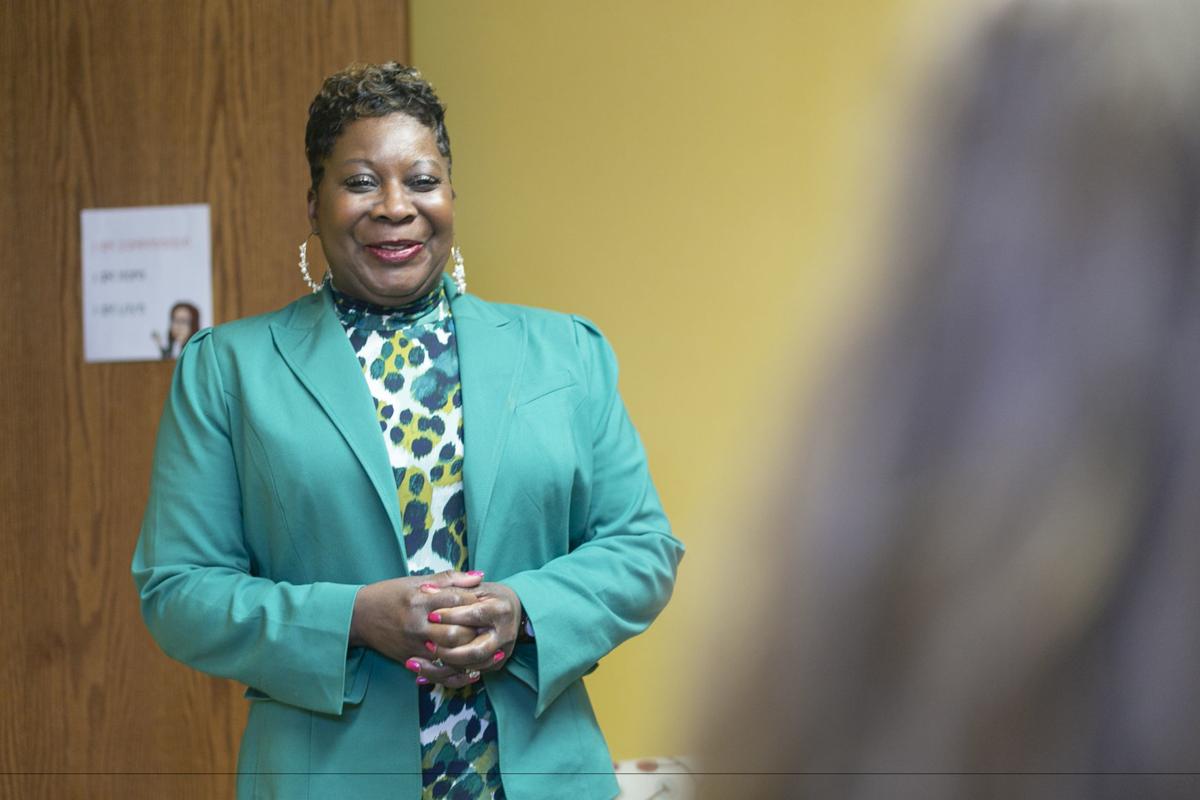 Cathy Weatherspoon smiles at Sherri Rush at the Community Foundation on Monday, Feb. 24. 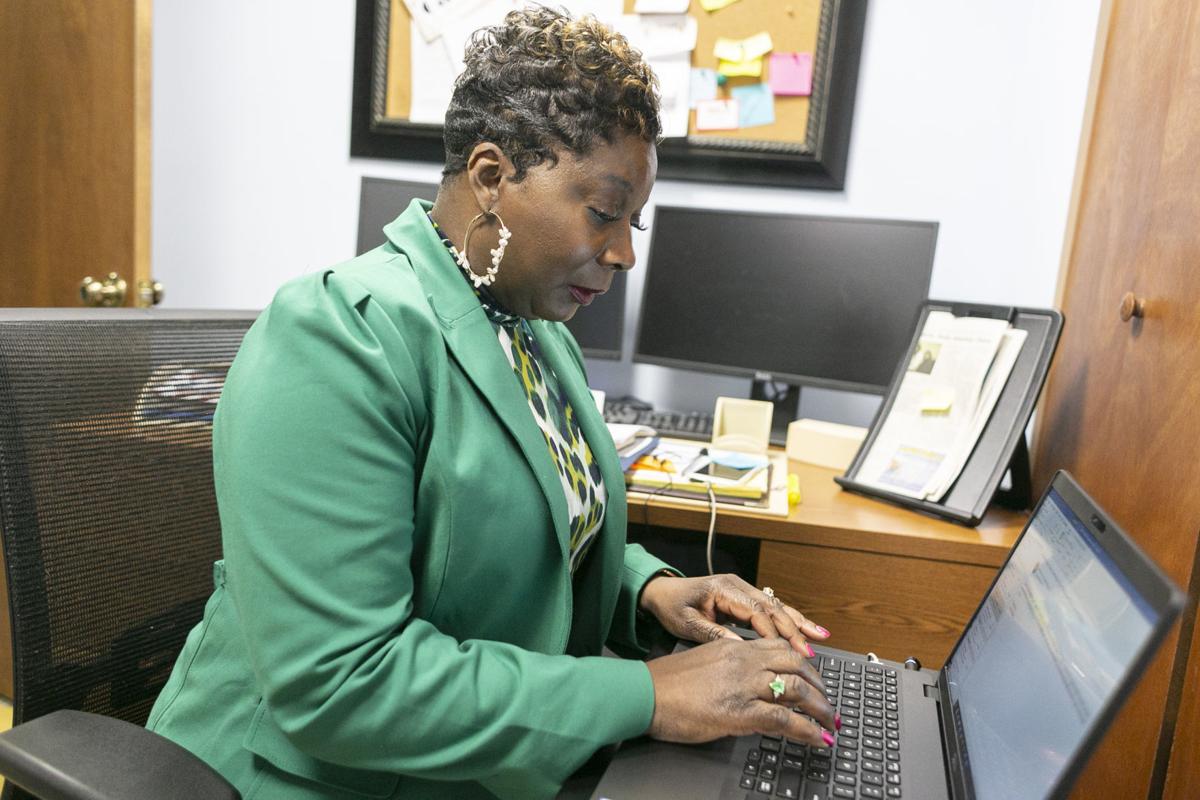 Cathy Weatherspoon works in her office located in the Community Foundation building.

Cathy Weatherspoon smiles at Sherri Rush at the Community Foundation on Monday, Feb. 24.

Cathy Weatherspoon works in her office located in the Community Foundation building.

Cathy Weatherspoon, the executive director of Thriving Families, Thriving Grant County (TFTGC), has been filling gaps in her community since she was in middle school.

“I come from a family that was deeply involved in the civil rights movement,” Weatherspoon said. “My church, when I was younger, really pounded in us the value of making a difference.”

In the late 1960s and early 1970s, Weatherspoon’s family addressed issues of racism in a tense political climate in Georgia.

“My mom was real big on finding gaps in the community and figuring out how her kids could fill those gaps,” Weatherspoon said.

Although her family lived across the street from a predominantly black middle school, Weatherspoon’s mother insisted that she and her sister attend a mostly white school.

“... So we could just be able to push through and put our pulse on what was actually happening in the community,” Weatherspoon said. “It was hard, but the thing of it is, I would have to go through that at school, but when I got home, that was where I felt a lot of love and support, affirmation, and so I kind of understood why.”

Weatherspoon’s family and church saw the importance of registering people to vote and bringing awareness to injustice, she said.

“You hear about Dr. Martin Luther King, Jr. and how they would send children to sit at lunchroom counters,” Weatherspoon said. “That was our focus, using children to bring awareness to racism and divide.”

Weatherspoon did not do it alone, but had family and friends from church alongside her facing issues in the community.

“It was just instilled in me not to shrink back from challenges,” Weatherspoon said. “Somebody’s got to do it. It’s always been who I am, and it continues to be today.”

Weatherspoon said she learned about sacrifice from her Uncle Sonny More, who was the first black postman in their town, her aunt Ella Moore, who was a teacher and amateur tennis player, and her cousin Sandra Martin, who was one of two of the first black flight attendants for Delta Airlines.

“My family, although we were big into civil rights, they had an elegance about themselves that I’ve always valued,” Weatherspoon said.

When Martin came home from flying, Weatherspoon said her family would surround her with love because they knew her work was not easy.

When Weatherspoon got her first job working as a delivery person for the first black newspaper in her community started by Shiloh Baptist Church, her Uncle Sonny taught her the importance of tithing.

“I grew up with those morals. Life is about others and making sure that I’m doing my share of sacrificing on behalf of my community,” Weatherspoon said. “When I look back on where the striving comes from, I have to credit how I was raised.”

Today, Weatherspoon works to bridge gaps in Marion with TFTGC, a collective impact initiative that connects community members to address complex systemic issues, such as poverty.

Just like when she was growing up, Weatherspoon said she does not do this work alone.

“I always ask: What is something that you want for Grant County that you can’t do alone?” Weatherspoon said. “We have a lot of great organizations that are doing amazing things, but what are those systemic, complex issues in the community that one organization can’t successfully do? We want to get behind that.”

The Lilly Foundation recently offered TFTGC a $300,000 match to aid in their efforts to reduce childhood poverty.

The organization has formed partnerships with Hope House, the Grant County Rescue Mission and Carey Services, as well as the REAL Community Covenant Church, as it plans to open a bilingual preschool called the Dream Academy.

“(TFTGC is) not the only one that is wanting to alleviate poverty, there are other groups too, so I am starting these partnerships to be able to come alongside other groups so that we can do work and build capacity that way,” Weatherspoon said.

According to the Indiana Youth Institute, in the past two years, childhood poverty in Grant County has decreased from 33.3 percent to 27.3 percent, Weatherspoon said.

“Our end goal is to reduce the root cause of poverty and adverse family conditions, a high level, broad impact systemic change and not short term crisis management,” Weatherspoon said. “It’s not something that you’re going to see tomorrow, it could take at least four to five years to see change, but the change should be permanent. We want to make sure that what we do is long-lasting.”

Weatherspoon serves on many boards of directors including Carey Services, Circles of Grant County, Lark’s Song, as well as the Arts Commission, the Downtown Impact Committee, Gilead Ministries, the Boys and Girls Club and Huntington University Leadership Board.

“I am intentional about working with others that are working with people in poverty,” Weatherspoon said. “I’m the only paid person with Thriving Families, so I have to find unique ways to feel like I am a part of a team. It challenges me. It provides me with encouragement.”

Thriving to Weatherspoon means flourishing, by identifying ways that are not working and then working on those areas to get some traction in life.

“We all thrive in different ways,” Weatherspoon said. “But there are some baseline needs that community members should have to thrive for thriving, including access to healthcare, a good education, a quality home with running water and lights, transportation. These are basic things that every citizen deserves.

“Every day is different,” Weatherspoon said. “...but I always want to be here.”