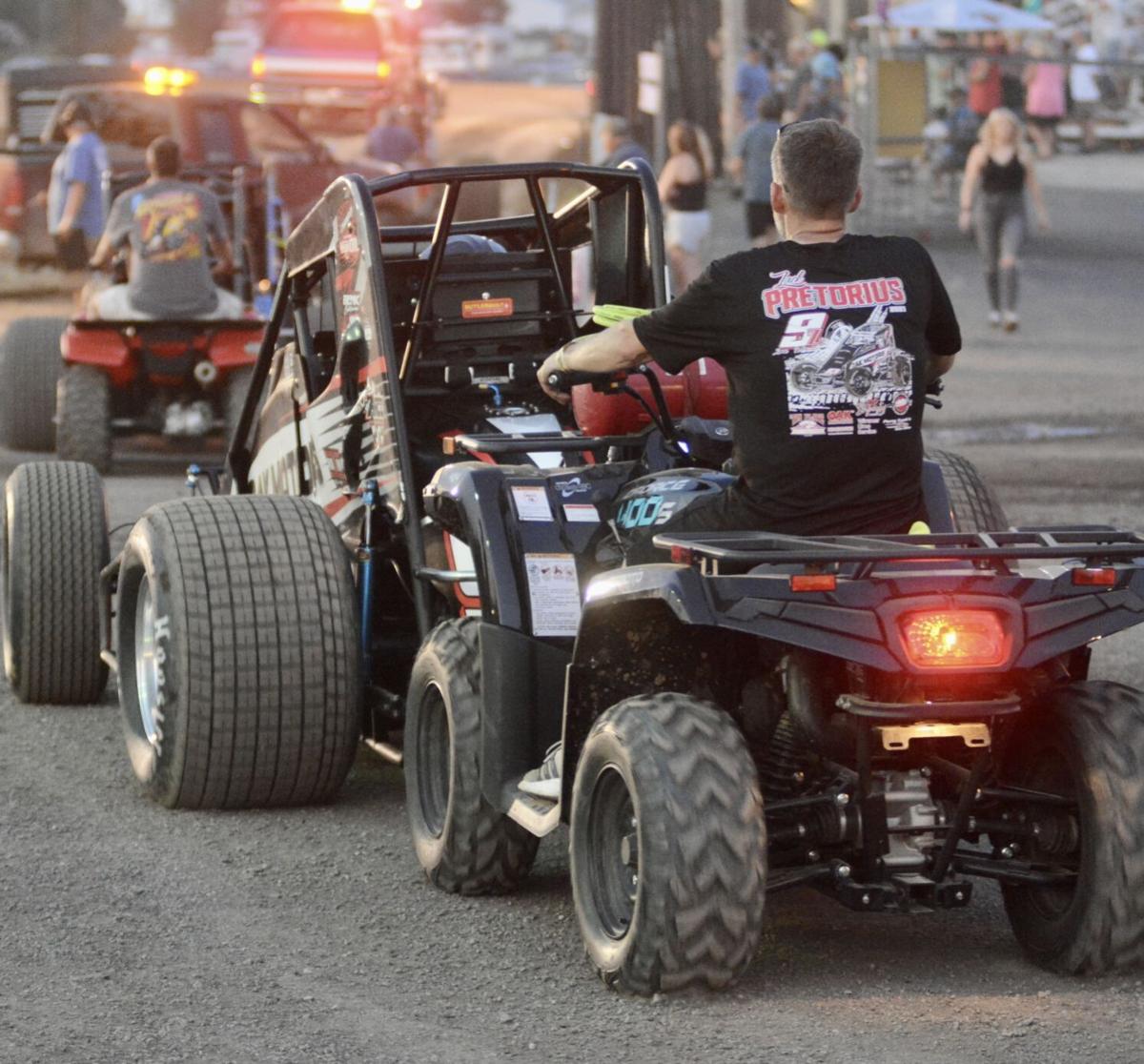 Jeff Pretorius waits to push his son Zack on the the Gas City I-69 Speedway before the semifinal-feature race Monday during USAC’s Indiana Sprint Week event. Zack finished third in the semi to qualify for his first-ever race in the USAC AMSOIL national touring series feature race. 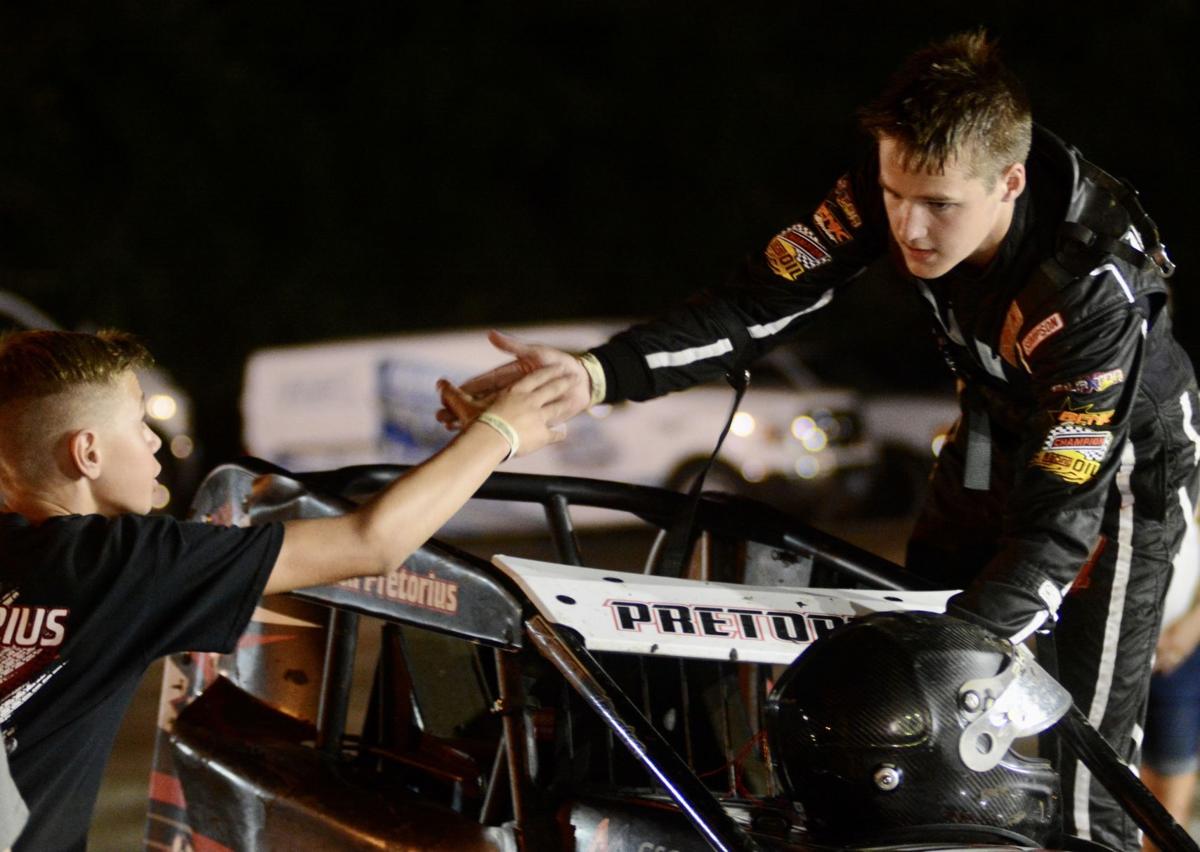 Zack Pretorius (right) gets well wishes before he climbed into his sprint car to compete in the USAC Indiana Sprint Week feature race Monday at Gas City I-69 Speedway. 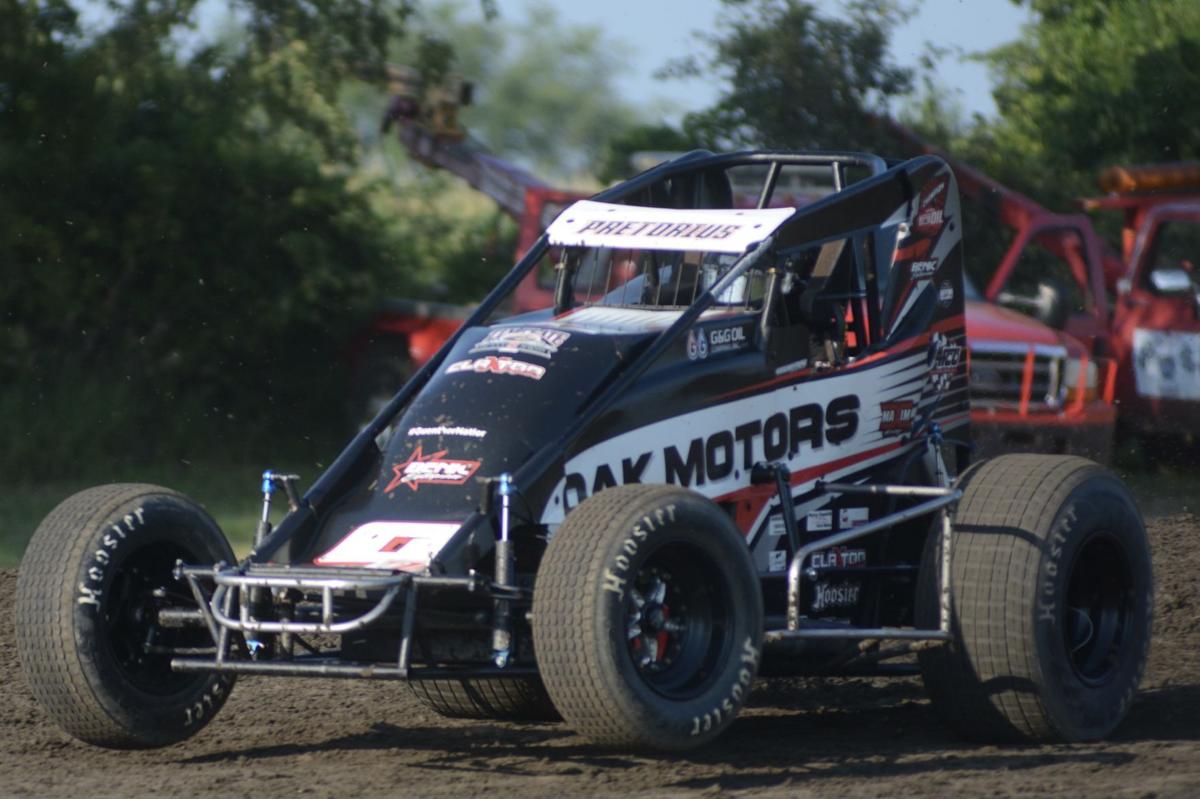 Zack Pretorius, a 2021 Madison-Grant graduate, drives through turn two at Gas City I-69 Speedway during a hot lap session prior to the start of Monday’s USAC Indiana Sprint Week show at the track.

Jeff Pretorius waits to push his son Zack on the the Gas City I-69 Speedway before the semifinal-feature race Monday during USAC’s Indiana Sprint Week event. Zack finished third in the semi to qualify for his first-ever race in the USAC AMSOIL national touring series feature race.

Zack Pretorius (right) gets well wishes before he climbed into his sprint car to compete in the USAC Indiana Sprint Week feature race Monday at Gas City I-69 Speedway.

Zack Pretorius, a 2021 Madison-Grant graduate, drives through turn two at Gas City I-69 Speedway during a hot lap session prior to the start of Monday’s USAC Indiana Sprint Week show at the track.

GAS CITY — The road to the winner’s circle in any form of auto racing is seldom an easy drive, and triumphs aren’t always measured by being the first to reach the checkered flag.

Zack Pretorius is now into his second summer of full time, non-wing sprint car racing, and the 2021 Madison-Grant graduate and former Argylls’ basketball player experienced both the thrill and agony that comes along with his pursuit during USAC’s NOS Energy drink Indiana Sprint Week event held at Gas City I-69 Speedway Monday night.

Pretorius, who was Gas City Speedway’s sprint car series Rookie of the Year in 2020, tested his abilities against the top open-wheel drivers in the country on the quarter mile high banks and flashed potential that might someday lead him into the USAC AMSOIL national series someday soon.

But it was far from an easy night.

Pretorius put down a lap of 11.984 seconds on his first of two laps in qualifying, which was third-fastest in his group of 23, and one of the 10-best times among the 46 drivers that made their way back to Gas City after Friday’s originally scheduled date was rained out.

That momentum was squashed, however, when Pretorius, who started fifth in his heat race, was collected in a wreck on the first lap. He was towed back to the pit area where his dad and chief mechanic, Jeff Pretorius, along with a small collection of racing friends, started to quickly replace the front end on the damaged car sponsored by Oak Motors.

“We wanted to pick up a spot and go straight to the feature,” said Zack, who could’ve advanced straight to his first-ever USAC series feature race with a top-4 finish. “There was a couple of drivers that got together, we just had nowhere to go. I just drove it in there and tore the front end out of it. These guys, my family and friends are great, and [I] can’t thank them enough for getting the car back together for me.”

Jeff Pretorius watched from outside the fence along turns three and four when his son got mixed up in carnage on the track.

“Dejected for sure,” Jeff said of his feeling immediately following the crash. “We’ve shown some speed here and there, a lot of the wrecks he’s gotten into are not of his own doing so it’s really frustrating.

“You know the car can do it, he can do it, it’s part of racing. You just pick up and move on down the road.”

It was a short walk back to the pits where the furious activity of replacing the entire front end of the race car quickly got started.

Meanwhile, Zack’s hot lap in qualifying allowed him to skip the C-Main and advance into the semifinal feature, where a top-6 run would give him a shot to race against the best of the best in USAC.

Pretorius avoided another wreck early in the 12-lap semi, moved himself into third place and stayed there to claim the coveted opportunity to run a race in the national showcase series.

“With this field of cars and this event, last year in this event we were nowhere near that,” Zack said. “Especially to bounce back from a wreck, to come out there and run with those guys that are race winners and great drivers, it just feels great.

“I didn’t expect it, but I couldn’t really be much happier about it,” he added. “We came in with an open mind just hoping to learn something, improve and do our best. Thankfully our best tonight was a USAC start and I couldn’t be more happy about it.”

In the feature, Pretorius started mid pack and peddled his car around the rim of the track, avoiding trouble and gaining valuable experience. By the time Logan Seavey took the checkered flag to win his second-consecutive feature race at Gas City, Pretorius had slipped back to the 21st position of 22. He finished ahead of Thomas Meseraull, who competes regularly at Gas City and won the track championship in 2019.

“I learned things in that feature that we need to improve on,” Zack said. “Just to continue to work on what we to need to work on, focus on ourselves and not worry too much about what’s going on around us. Focus on getting ourselves better is all we really need to do right now.”

Every night at the track, really every lap and most moments in the pits, are all opportunities for Zack and Jeff Pretorius to learn, grow and improve. Monday night was perhaps the most important experience to date for the father-son duo.

“We’re competing with the best in the world out here, so just to get your name up there and into the same race, that’s outstanding,” Jeff said. “It’s been a year-and-a-half journey so far. We’re going to continue to fight the fight and hopefully one day we’ll be on the winner’s podium.”

Zack and Jeff both shared that communicating between the two about what needs to be done to make the car better and faster has been difficult. It’s another part of the learning curve that started when they went go-kart racing when Zack was only 5 years old.

Jeff said he’s taken the same approach to sprint cars as he did with karts, given there’s no racing history to speak of in his family lineage.

“Just asked a lot of questions, but go karts and this is a totally different animal,” Jeff said. “We’re talking a go kart with 30 horsepower and now we’re dealing with 850 horsepower. We lean on the Benic group a lot in asking questions about what we need to do. It’s a journey for sure.”

“It’s been very difficult simply because I don’t know what to put into it,” Zack said. “He doesn’t know exactly the changes we need to make, so it’s hard to decipher what to do. We’re definitely getting more and more comfortable with it and able to figure out whats going on with the car. I’m able to tell him what it needs more recently. That’s going to help us get faster.”

Zack said comfort and speed go hand-in-hand. And that combination is what will ultimately help him reach into higher levels of racing in the future.

“I definitely have a lot more confidence in the car right now,” Zack said. “Me and my dad are getting the car to work to my liking a lot better and I’m getting a lot more comfortable. Comfort is all that really matters.

“If you’re not comfortable you’re not going to be fast,” he continued. “We’re getting more comfortable. We’re learning every night. We’re going to keep moving forward and see if we can win a race at the local level sometime here soon.”