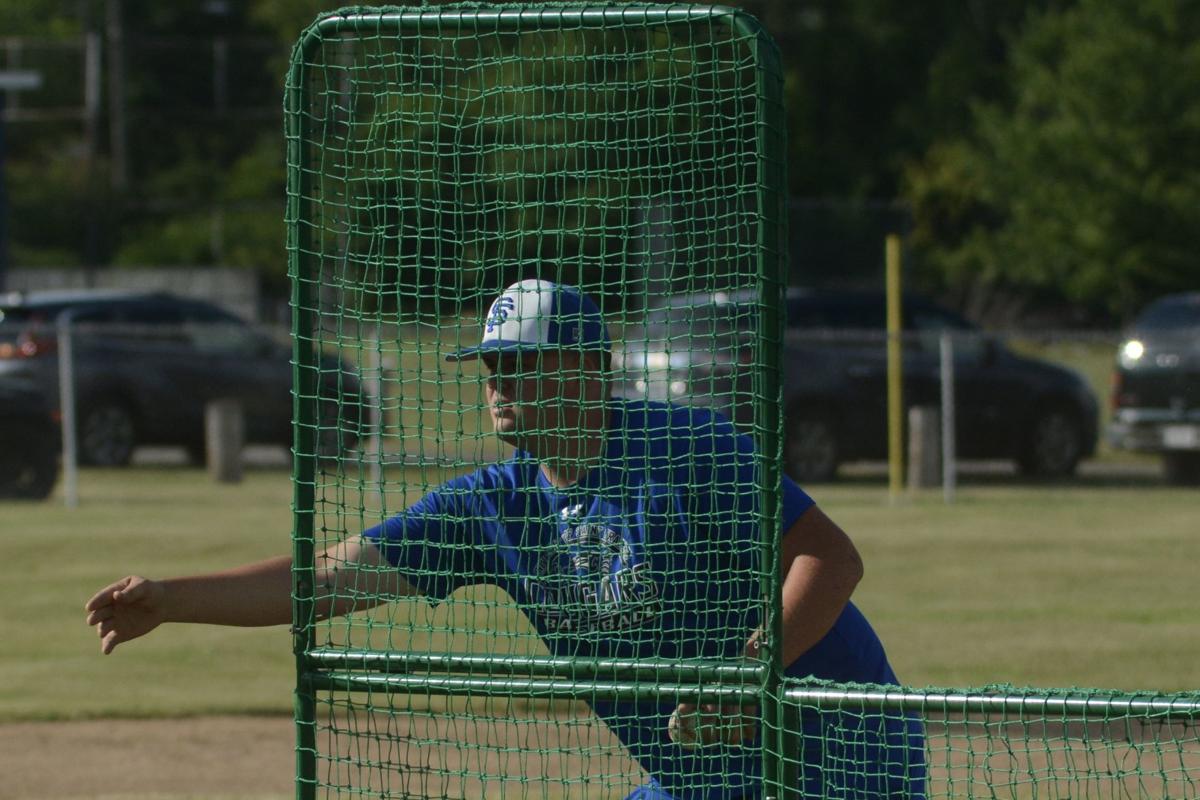 Josh Pluimer, a 2019 Eastbrook graduate and current pitcher at the University of Saint Francis, throws underhanded batting practice for the Post 10 Bombers at Lincoln Field earlier this week. Post 10 is schedule to host a doubleheader with Franklin beginning at noon on Saturday at Lincoln Field. 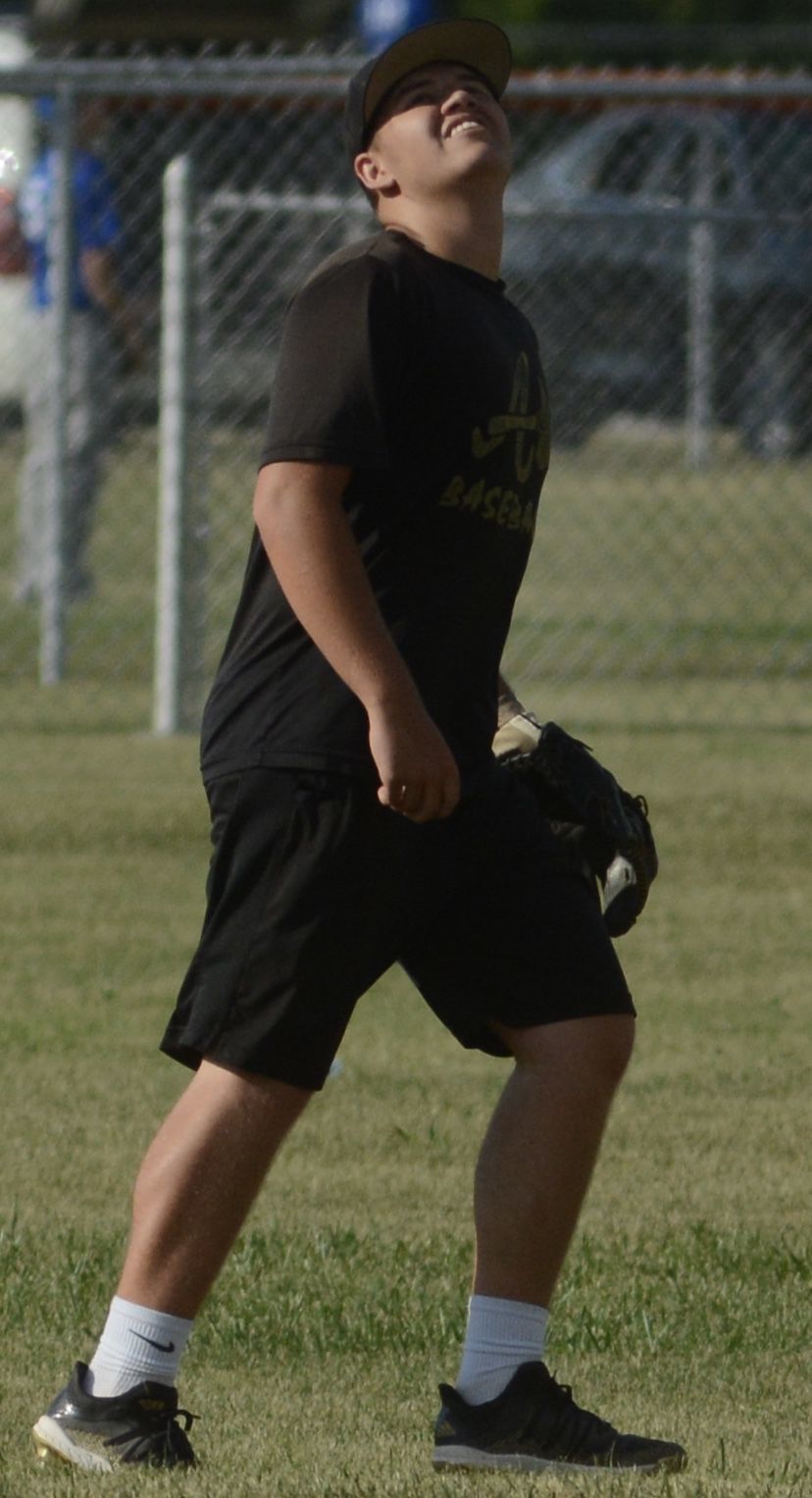 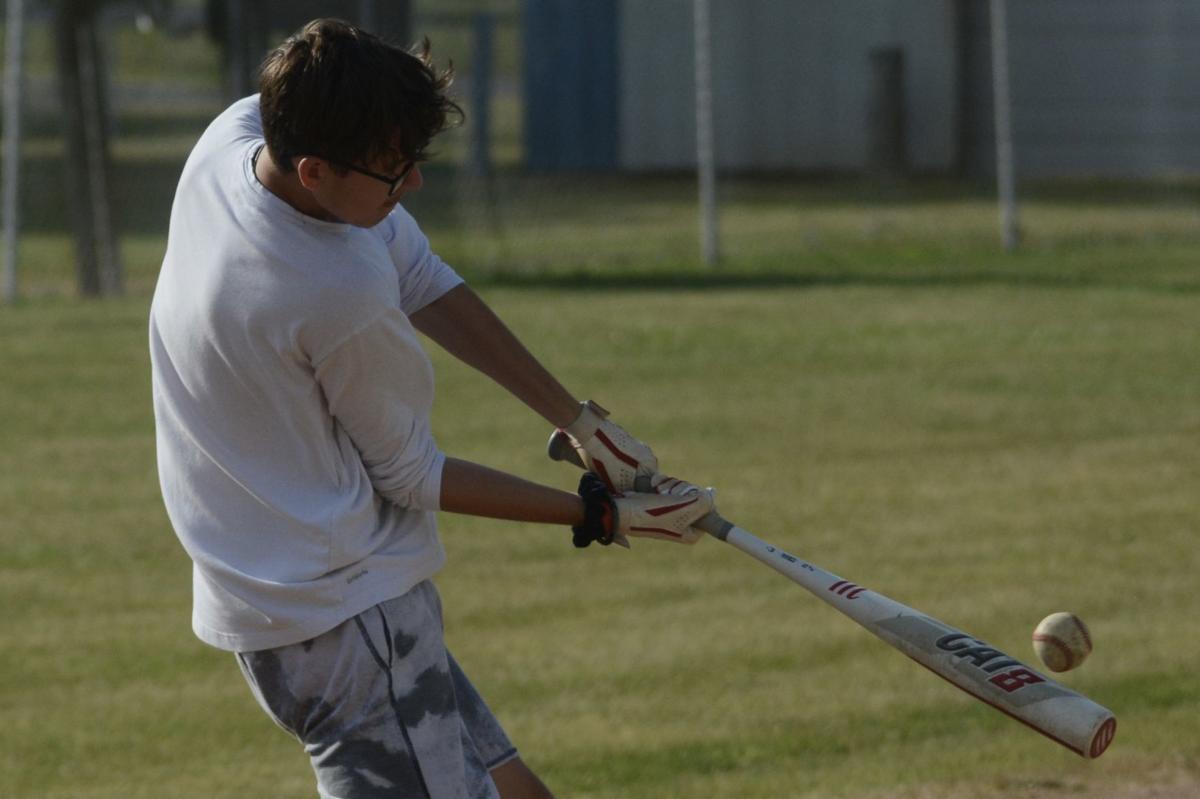 Mississinewa’s Dylan Fritch takes a swing during batting practice at a Post 10 Bombers practice at Lincoln Field earlier this week.

Josh Pluimer, a 2019 Eastbrook graduate and current pitcher at the University of Saint Francis, throws underhanded batting practice for the Post 10 Bombers at Lincoln Field earlier this week. Post 10 is schedule to host a doubleheader with Franklin beginning at noon on Saturday at Lincoln Field.

Mississinewa’s Dylan Fritch takes a swing during batting practice at a Post 10 Bombers practice at Lincoln Field earlier this week.

Having the opportunity to get time on the baseball field was something every player on Marion’s American Legion Post 10 Bombers baseball team had taken away by COVID-19 this spring.

So when Bombers manager Blake Hancock decided to assemble a team for summer of competition, he didn’t have any troubles finding players.

In fact, it was the exact opposite problem.

“A lot of the guys were wanting to play baseball and they all do. I look for kids that love the game,” said Hancock, who also serves as associate head coach of Marion High School’s varsity team. “It was kind of hard telling some kids no, but you can’t carry 20 kids.

“Everybody is amped to play,” he added. “They weren’t as enthused to run more poles than normal because we’re not in as good of shape that we’re usually in. … Everybody wants to be here. Days that I want to take a rest – we’ve got three games this weekend – they want to practice. I cannot say anything bad about the attitude or the work ethic of the kids.”

The Post 10 Bombers 18-and-over team, like many summers, has a unique makeup of players. Four of Grant County’s five high schools are represented by either former or current players, Oak Hill is the lone exception. And Hancock also fields players from both Southwood and Northfield in Wabash County.

At least two of the players, Ethan Dixon (Marion, 2019) and Josh Pluimer (Eastbrook, 2019), started their college careers during late winter, but obviously had their freshman seasons cut well short by the pandemic’s onset.

For everyone involved, it’s an opportunity to get back on the baseball field and back into their favorite summer pastime.

“I’m trying to have as much fun with it as I can. College is a little more serious,” said Dixon of playing for the Bombers.

Dixon appeared in four games and accumulated 8.1 innings for Indiana Wesleyan prior to the spring-sports shutdown, which limited the Wildcats to just 19 games.

“I’m trying to have fun with this but also grow as a pitcher,” Dixon said. “(I want to) make sure I’m working on things that my college coaches have given me to work on, making sure I’m hitting my spots and not having mental lapses because it’s not college baseball.”

Pluimer appeared on the pitchers mound in two of Saint Francis’ 21 games this winter, which included one start. He pitched a total of 4.1 innings in college competition but said he still gained valuable experience during his freshman year.

Pluimer is also relishing the chance to make up for a little lost time from the baseball season with the Post 10 team.

Logan Wagner, a 2020 Marion graduate and starter for the Giants at shortstop since the first game of his freshman year, was one of the unfortunate high schoolers to lose their entire season to COVID-19. Luckily for Wagner though, he had his college plans in place prior to the pandemic.

Wagner signed to play his college ball at Anderson University during the winter and hopes to use the summer to prepare him for the next phase of his baseball career.

“It’s really, really helpful,” said Wagner of playing Legion ball. “I just need to get my reps back. I need to get game reps, game speed just so when I get to college I’m sharp and ready. You can take reps in the (batting) cage, but until you get out on the field and take your reps, it’s just way different.”

Madison-Grant standout Nick Evans is also trying to make up for some lost time and reps on the field. Evans was a junior last year so he has the possibility of playing for the Argylls in the spring of 2021.

Still, Evans is approaching his summer with the Bombers as being very important for what he wants to do in his baseball future.

“It’s very important. First of all, I’m trying to go to the college level and play baseball, at least that’s the hope,” Evans said after practice on Tuesday. “Just being able to come back and play again and kind of makeup for the spring (is important). I love playing for the school, but it’s just so much different (than Legion ball).”

Hancock, and his assistant coach Jeremy Rodabaugh, couldn’t be more excited about the sum of parts they’ve assembled to play this summer.

“I tell everybody that the best thing I’ve ever done is to bring these kids together. It creates a healthy rivalry for these kids,” Hancock said. “We all play Southwood. We all play Northfield, and we play every county school. So it’s great that these kids get to know each other besides from the jersey they put on.

“All of them are friends. We’ve never had riffs in the dugout,” he added. “They all pick each other up if somebody gets their head down. It’s actually my favorite thing that I do with the Legion is bringing all these kids together from different schools. We get out here and it’s a family. It’s as much of a family as any school sport.”

The most difficult part of the process has been finding teams and games to play. The American Legion’s national organization cancelled the regional and national tournaments for the summer. Hancock said that typical opponents for the Grant County team such as Lafayette, Kokomo and Terre Haute have opted to not field teams this year.

But the Bombers have found some games. So far they’re 1-3, opening the summer with a win over the Muncie Chiefs on June 14 the dropping a game to Franklin the same day. The also lost a pair of games to Indian Creek on June 21.

Post 10 has a doubleheader scheduled for Saturday starting at noon against Franklin on their home turf at Lincoln Field. The Bombers have only six more individual games scheduled, but Hancock hopes to have his team compete in at least one, if not both of the tournaments Taylor University will host in July. The first tourney in Upland will run from July 16-18 and the second will go from July 30 through August 1.

Hancock said he’ll continue to look for opportunities to play games until the players all start returning to their respective schools. He also said he’s got some relatively simple goals for the time he has with his players.

“No. 1: reps. Getting back into the baseball swing. We should have a fantastic season,” Hancock said. “Once we get into our groove and start seeing some live pitching, getting back to playing baseball the way we all play it, I think we’ll be in a great spot.

“We have arms that are going to help put us in good spots. We have guys that know the game,” he continued. “Everyone enjoys their role. … That’s one thing I take the most pride in. Our ultimate goal is to always win, but in the long run our goal is just get these kids some games and get them ready for next year.”