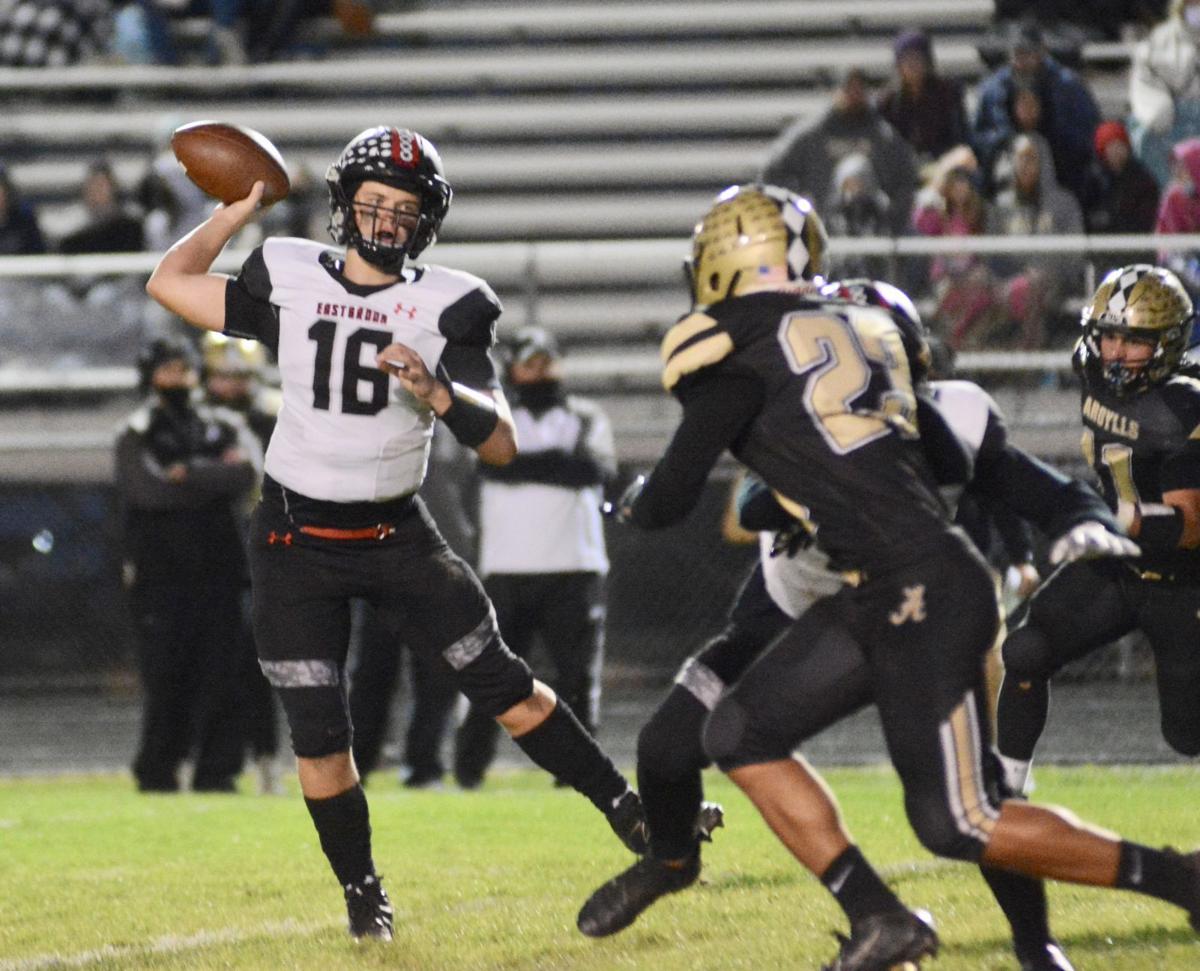 Eastbrook quarterback Jett Engle prepares to deliver a pass in the first half of the Panthers 61-8 win at Madison-Grant Friday night. 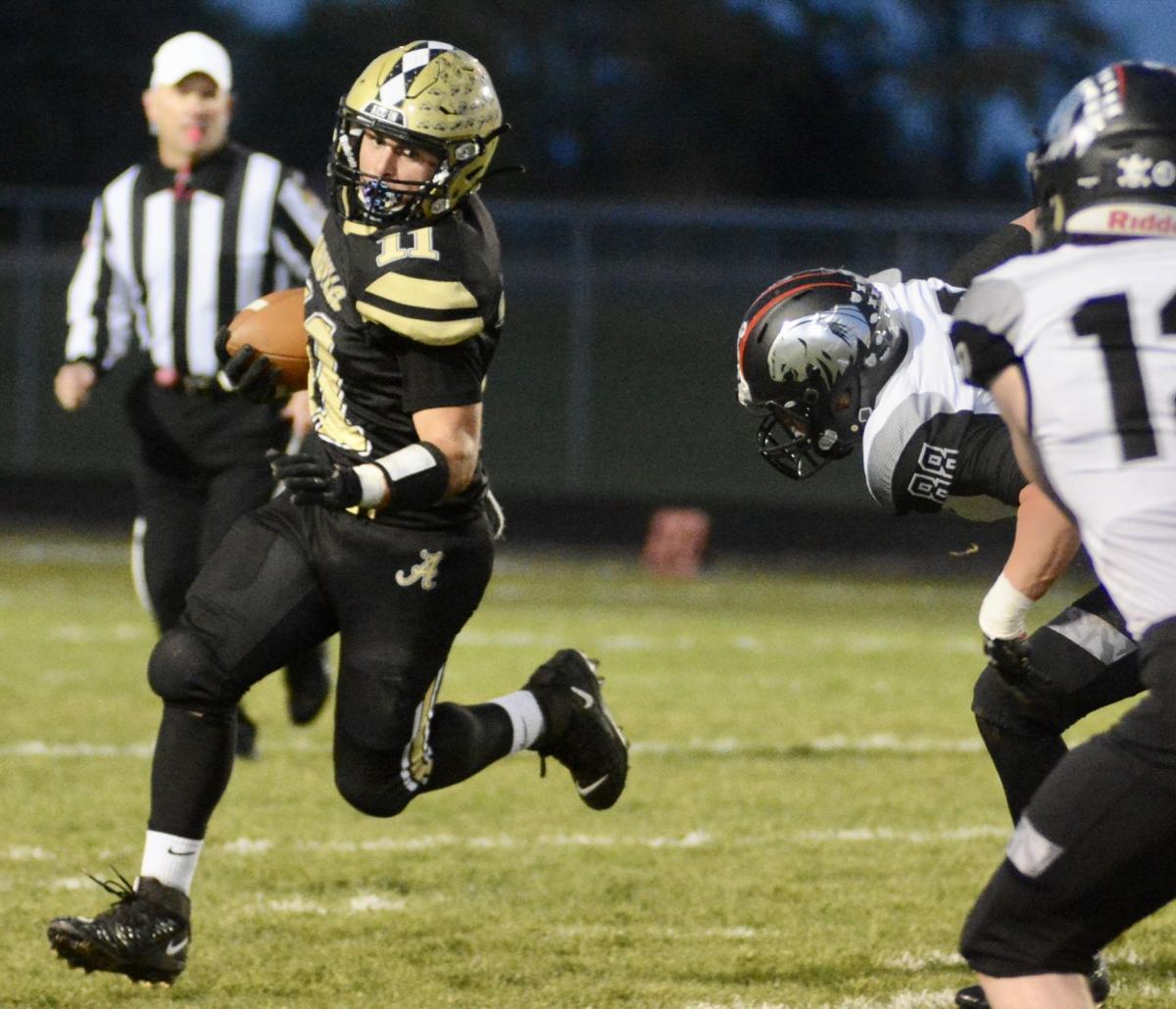 Madison-Grant's Clayton Powell looks for running room in the first half of the Argylls loss to Eastbrook in Fairmount Friday night.

Eastbrook quarterback Jett Engle prepares to deliver a pass in the first half of the Panthers 61-8 win at Madison-Grant Friday night.

Madison-Grant's Clayton Powell looks for running room in the first half of the Argylls loss to Eastbrook in Fairmount Friday night.

FAIRMOUNT — The Eastbrook football team added to a quite impressive streak Friday night and is finding its stride with the postseason on the horizon.

The Class 2A No. 2 Panthers put together an efficient first half en route to a 61-8 win over Madison-Grant to secure their second-consecutive outright Central Indiana Conference championship and fourth in six years.

Eastbrook has now won 20-straight regular-season CIC games and is 44-2, counting tournament games, against conference foes in a the six-year span. Mississinewa handed the Panthers both losses and won the CIC in 2016 and ’18.

“It’s always one of the goals,” said Eastbrook coach Jeff Adamson of winning the CIC. “I know we weren’t together all through June, but we were still talking about it in Zoom meetings and things like that. It’s a neat deal.”

Eastbrook scored on Jason Hale’s 43-yard punt return and David Shutt’s extra-point kick only 2:13 after kickoff for a 7-0 lead and delivered the knockout punches shortly after.

The Argylls played without starting quarterback Jack Thompson and had almost no success moving the football on offense.

M-G created some good fortune by recovering a fumble near midfield after punting on its second possession.

Clayton Powell rushed for 11 yards on first down, M-G’s only first down of the first half, but the Panthers forced a turnover on downs after four plays and took possession at their own 43-yard line.

The Panthers covered 39 yards on just two plays on their third possession. Quarterback Jett Engle connected with Hayden Raikes for 23 yards on the first play, then threw a short pass to Dalton who turned it into a 16-yard touchdown to make it 20-0 with 1:13 to play in the opening quarter.

Engle also had a 30-yard touchdown pass to Logan Collins in the second quarter sandwiched between TD runs of one and six yards by Alden Miller.

Hale added a five-yard touchdown run with 22 seconds to play in the first half and the Panthers took a 47-0 lead to the locker room.

Engle completed 4-of-5 passes for 97 yards and his passing ability gives defensive coordinators for Eastbrook’s future opponents yet another reason to be concerned.

“He’s just very intelligent. In some ways he hasn’t had a lot of opportunities (to pass) just because of the way games have gone,” Adamson said of Engle, who transferred from Western to Eastbrook last summer. “He’s very competitive. He does the option stuff really well too. He’s a dynamic player for us and he’s been a great fit with the rest of the guys.”

Most of Madison-Grant’s 71 yards of total offense came on the Argylls scoring drive late in the third quarter. Trey Vetor set it up with a 38-yard run then Tanner Brooks swept around left end for a 6-yard TD. Powell scored the two-point conversion.

“One thing we keep telling them is it’s 0-0 the whole game, you play the whole entire game like it’s the first play,” said Argylls coach Brady Turner. “That’s what we keep trying to preach to them and for the most part we did that.”

Eastbrook finished the season 8-1 and 7-0 in the CIC. The Panthers open their title defense in Class 2A sectional 36 by hosting Blackford at 7 p.m. on Friday.

Turner plans to put M-G’s week off to good use.

“This week we’ve got to get healthy. We’ve got to get some kids back. We’ve got a bunch of bumps and bruises,” he said “We’re going to use this week to work on the small things, tackling and covering kicks, that kind of thing. Work on the fine stuff then the following week we’ll work on who were playing.”

Malachi Silmon rushed for 134 yards and two touchdowns while Marion’s defense forced five turnovers and scored a touchdown in Lafayette on Friday.

The Giants used a 99-yard drive to score first on an 11-yard run by Cubie Jones with 3:47 to play in the first quarter. The first of four Kyle Coryea point-after kicks put Marion up 7-0.

Marion’s final points of the first 24 minutes were set up by Zaimar Burnett, who intercepted a pass in the end zone and returned nearly 70 yards before being tackled with two seconds remaining.

Silmon scored on a 13-yard run early in the third quarter then Ty Coleman returned an interception 30 yards for a touchdown with just over three minutes to play in the third to finish the scoring.

The game was called early in the fourth quarter when a transformer fire caused all the lights in McCutcheon’s stadium to go out with the Giants leading 31-0.

Marion ran for 280 yards and held the Mavericks to just 27 on the ground. McCutcheon was 10 of 16 on pass attempts for 91 yards and three interceptions.

A week after being penalized 12 times for more than 100 yards against Indianapolis Tech, Marion drew just two flags for 10 yards on Friday.

The Giants finished the season 6-3 and 6-1 in the NCC to end as runner-up to Lafayette Jeff.

Oak Hill 28, Blackford 0The Golden Eagles will roll into play in Class 3A sectional 27 riding a five-game winning streak after winning at Blackford on Friday.

Sophomore running back Kyle Turanchick rushed for over 100 yards for the fourth-straight game with 17 carries for 135 yards and a touchdown. Oak Hill ran for 275 yards as team and senior Blake Fox added 93 yards on 12 carries with a score.

Eagles’ quarterback Clay McCorkle complete 7-of-13 passes for 116 yards and a touchdown pass to Mason McKinney. McCorkle also rushed four times for 26 yards and a score. McKinney caught four passes for 54 yards and Tristen Hayes had two grabs for 36 yards. Turanchick caught one for 26 yards.

Mark Sevier made all four of his extra-point kicks.

Oak Hill finished the regular season 6-3 and ended runner up to Eastbrook in the CIC with a 6-1 mark.

The Golden Eagles travel to Bellmont on Friday for the opening round of sectional 27.

Mississinewa 56, Elwood 6The Indians raced out to a 35-0 lead in the first quarter and cruised to their fourth-straight win to close the season Friday night in Elwood.

Elijah Standridge started the scoring with a 65-yard run less than two minutes after kickoff and Ole Miss scored three more touchdowns over a 2:17 span to quickly put the game away.

Elyh Felver recovered a blocked punt in the end zone, Carson Campbell scored on a six-yard run and Landry Rock connected with Greg O’Banion on a 25-yard TD pass to make it 28-0 with 5:08 remaining in the first quarter. Campbell ran 50-yards for another score just over three minutes later.

Felver caught a 25-yard TD pass from Rock in the second quarter and Garrett Johnson pounded in from a yard out to give Ole Miss a 42-6 lead at halftime.

Mississinewa held a 353 to 137 advantage in total yards.

Peyton McPeak and Ian Fetterhoff each intercepted passes for the Ole Miss defense.