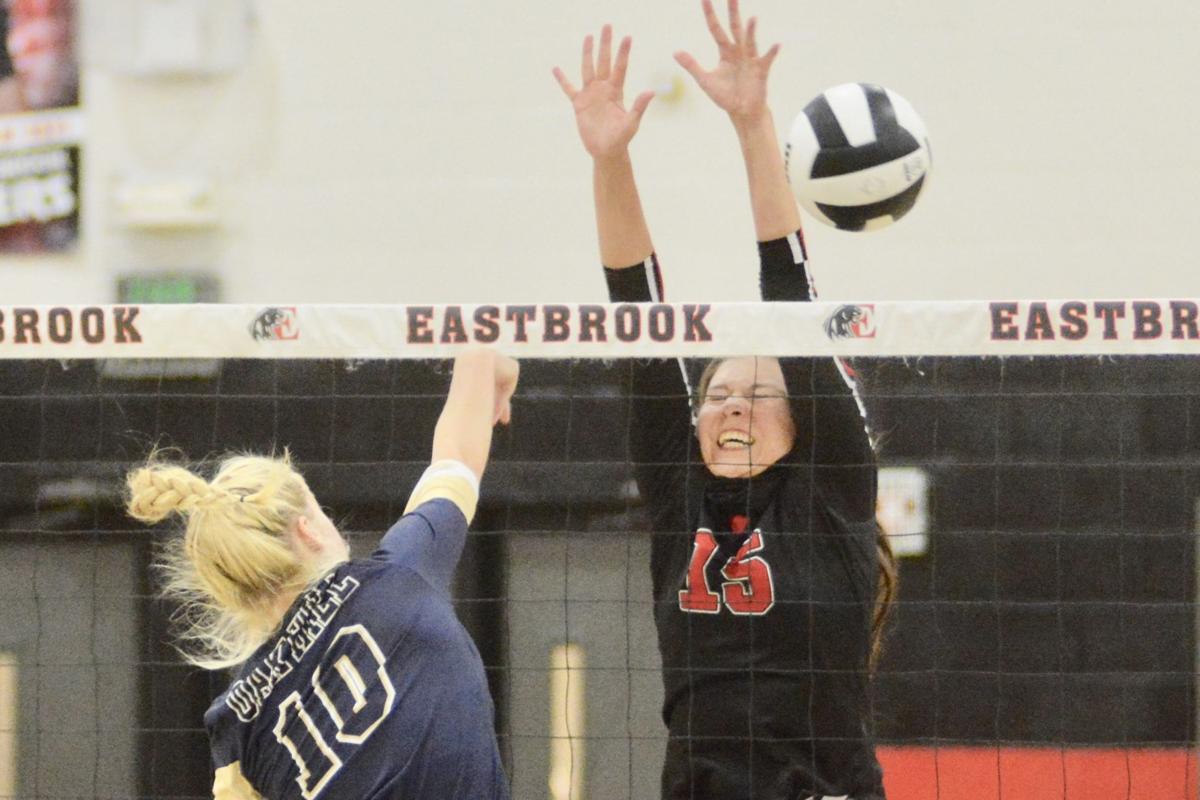 Eastbrook’s Lexi Binkerd blocks a spike by Oak Hill’s Katy Jo Camden in the Panthers’ 3-1 win at Eastbrook on Thursday. 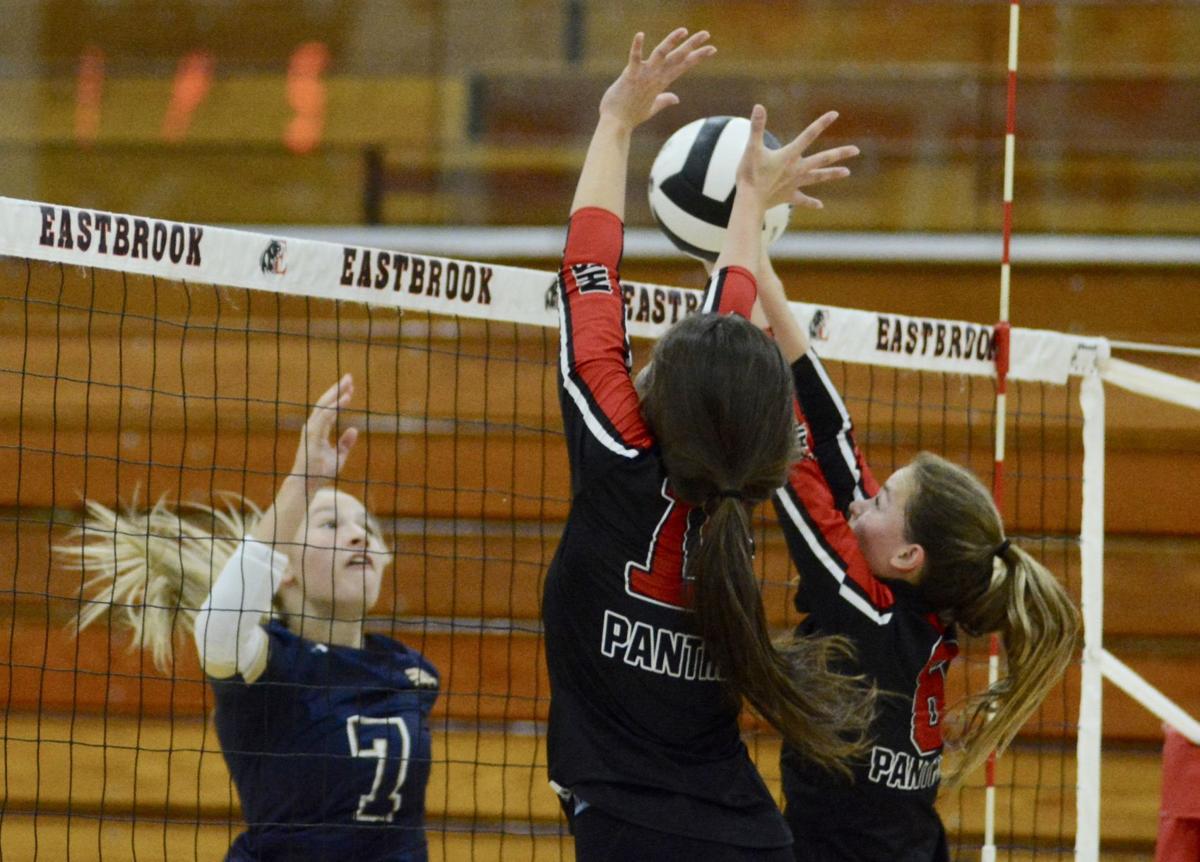 Oak Hill’s Alyssa Thompson tries a spike against the block set up by Eastbrook’s Lexi Binkerd (left) and Allyson Hiles. The Panthers topped the Golden Eagles 3-1. 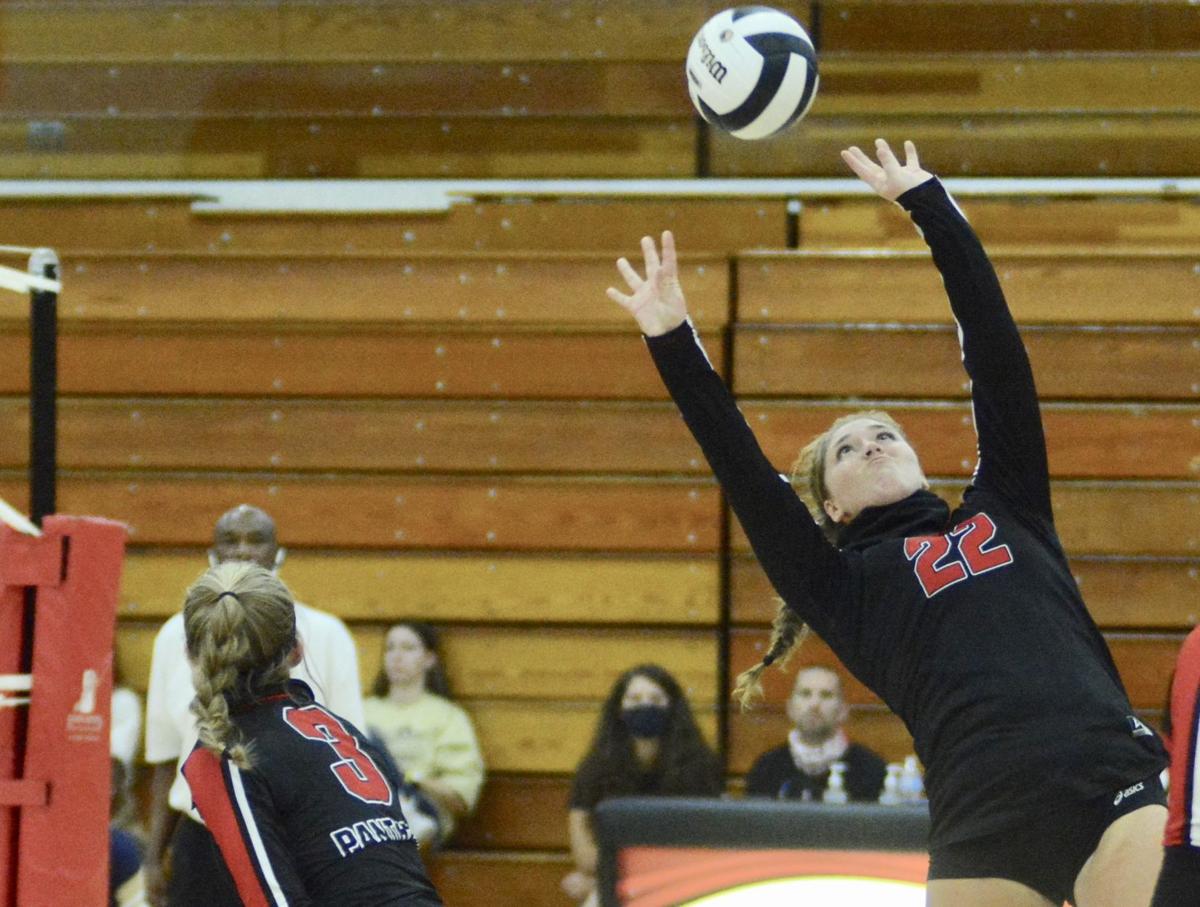 Eastbrook’s Ava Walters makes a pass towards the net in the Panthers 3-1 win over Oak Hill on Thursday.

Eastbrook’s Lexi Binkerd blocks a spike by Oak Hill’s Katy Jo Camden in the Panthers’ 3-1 win at Eastbrook on Thursday.

Oak Hill’s Alyssa Thompson tries a spike against the block set up by Eastbrook’s Lexi Binkerd (left) and Allyson Hiles. The Panthers topped the Golden Eagles 3-1.

Eastbrook’s Ava Walters makes a pass towards the net in the Panthers 3-1 win over Oak Hill on Thursday.

Oak Hill and Eastbrook each put together stretches of good volleyball Thursday evening in their Central Indiana Conference matchup.

But it was the home-standing Panthers that sustained their good play for a little bit longer stretches to earn a 3-1 win over the Golden Eagles.

“I was nervous coming out. We had a rough game on Tuesday, we won, but we just didn’t play what I was expecting, so I was hoping we would come out,” said Eastbrook coach Bailie Havens, who’s team moved to 8-7 and above .500 for the first time this season. “I was proud of them. Game two was little bit more of a struggle, but we won. That, to me, speaks volumes. We went for it, we did not give up. That hasn’t necessarily happened just yet, so the fact that they pulled it out, I love it.”

The Panthers started out strong, quickly building a 9-2 lead then extending it out to 15-6. The two sides exchanged four-point runs before the Golden Eagles clawed back within 20-16, but Eastbrook finally closed it out by a 25-20 margin.

Oak Hill gained the early advantage in the second set, jumping in front 9-4, but Eastbrook responded by scoring 11 of the next 12 points to move in front 15-10. With freshman Alivia Shaw serving, Oak Hill answered with seven-straight points to gain a 17-15 lead. The Panthers tied it up again at 17 before Oak Hill closed it with an 8-3 flurry and 25-20 win to even the match at 1-1.

“They were so excited. I told them now you know you can do it, just go out and do it again,” said Oak Hill coach Kristi Carmichael, whose Eagles won just their fifth set in 13 matches this season.

“Building some confidence, we just need that going forward. I think confidence is a big key.”

Oak Hill scored the first two points of set three and led 7-4 before the Panthers ran off eight-straight points and began to take control. The Eagles would get no closer than four the rest of the set and Eastbrook scored six of the final seven to finish off a 25-16 win for a 2-1 lead.

Wisconsin cancels visit to NU due to virus

The Panthers scored four of the first five points of the fourth set and were able to maintain a slim advantage until the Eagles tied it at 8-8 and 10-10. From there, Eastbrook edged away to a 19-14 lead, but Oak Hill fought back with the next six points and grabbed a 20-19 lead. The set was tied three more times before the Panthers scored the final three points to finish off the 3-1 victory.

“We definitely talked about old Eastbrook, new Eastbrook,” Havens shared about her message to the Panthers before the third set.. “…Old Eastbrook gave up game two, but new Eastbrook is what we need to push forward – in game three and four – but for the rest of the season.

“We can’t be comfortable. I think we got comfortable in game two,” she continued. “It’s not a fast paced game right now. I made the comment, it’s an incline 24-7, you never plateau. I’m not saying I gave them all the right words, but they picked it up.”

Oak Hill (1-12, 0-2 in CIC) plays in a four-team round-robin at Tri-Central on Saturday then hosts Madison-Grant on Tuesday.

Eastbrook (8-7, 2-2 in CIC) travels to Norwell on Monday then goes to Frankton on Tuesday for its next CIC matchup.