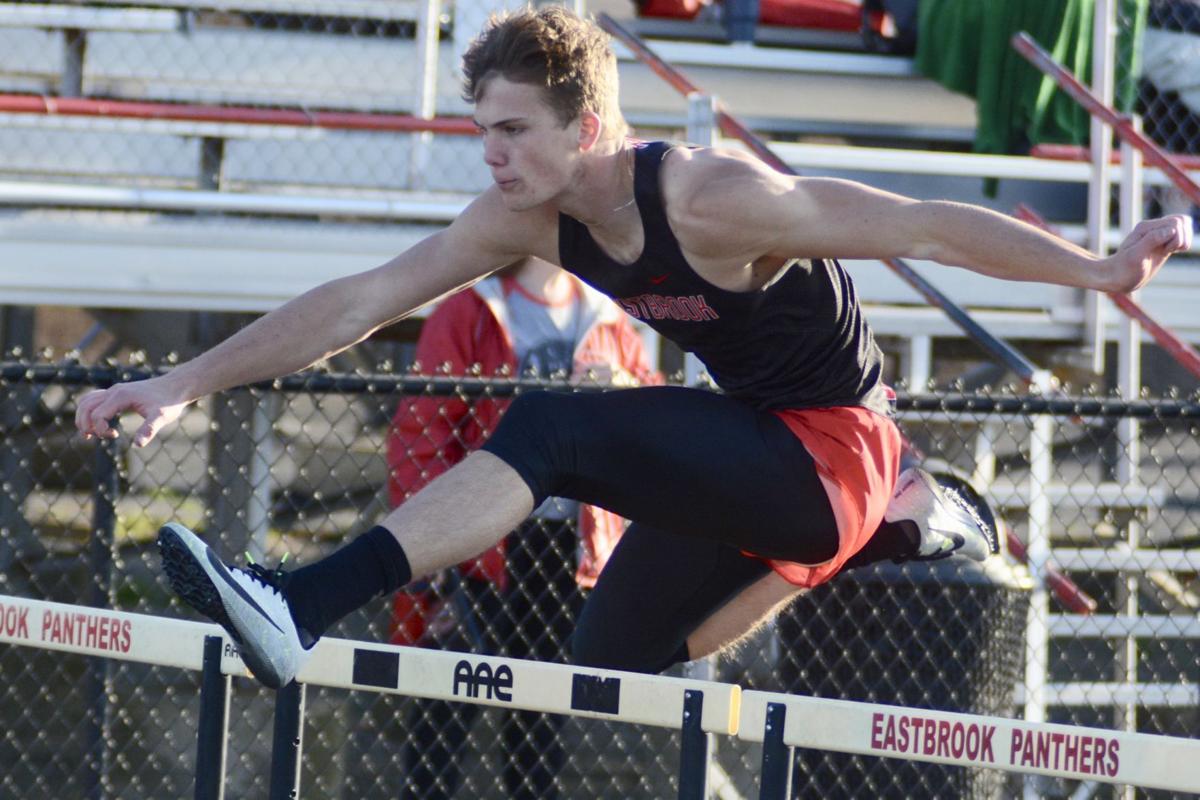 Eastbrook's Hayden Raikes clears a hurdle on his way to winning the 110-meter race Friday night at the Eastbrook Invite track and field meet. 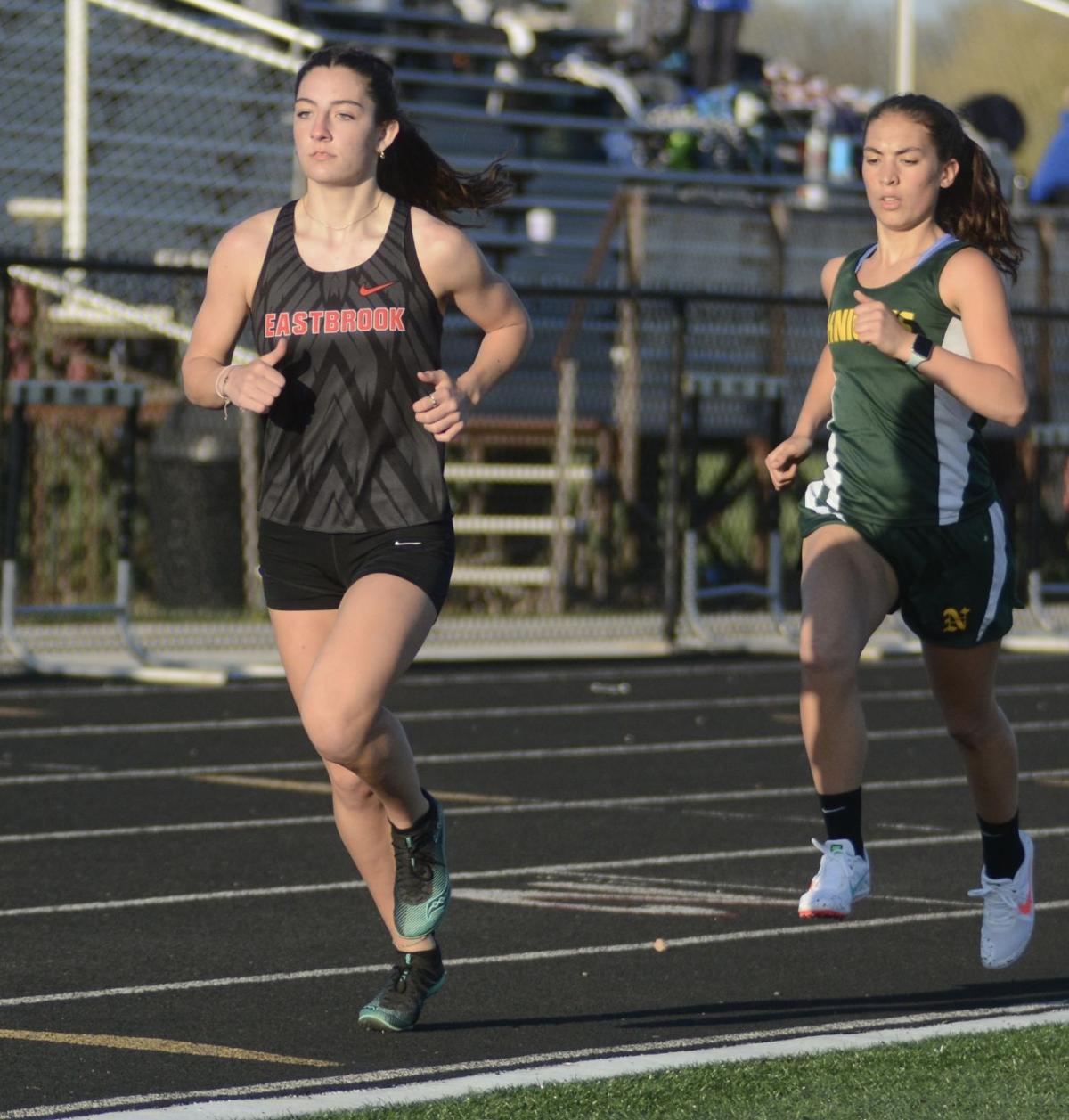 Eastbrook freshman Olivia Howell strides along during her win in the 1,600-meter race of the Eastbrook Invite Friday night.

Eastbrook's Hayden Raikes clears a hurdle on his way to winning the 110-meter race Friday night at the Eastbrook Invite track and field meet.

Eastbrook freshman Olivia Howell strides along during her win in the 1,600-meter race of the Eastbrook Invite Friday night.

A chilly evening was offset with some hot performances and competition during the annual Eastbrook Invite track and field meet Friday night.

Both the Panthers’ boys and girls teams defended their home track and walked away with the champion’s trophy at the end of competition, but the first big meet of the season brought with it layers of importance.

“You’ve gone almost two years without meets and there’s a lot of kids that have never done this before. This was really good practice to get a meet in with trials and finals, just learning how to pace yourself through those things,” said Eastbrook coach Stu Goble. “Learning how to run trials when you know you should advance out of them, so you pace yourself a little bit. Knowing how to manage some of those things when you get to conference and sectional, that’s a big deal.”

Senior Rachel Manning won the 400-meter dash and high jump competitions, while freshman Olivia Howell captured the 800- and 1,600-meter races, and both girls were part of two winning relay teams for the Panthers.

Led by senior Hayden Raikes, Eastbrook’s boys scored 138 points and squeaked out the meet win over Southwood (137). Northfield (96) finished third ahead of Northeastern (64) and Tipton (33).

Raikes set a new school record with a 14.7-second clocking to win the 110-meter hurdles. He added a win in the high jump and set a meet record of 22.7 seconds in winning the 200-meter dash. Raikes also anchored the Panthers’ winning 4x100 relay and was named the top performer of the boys’ meet.

“Hayden stands out because right now Hayden is going to be one of the best athletes around here,” Goble said. “We’ve been waiting for it. We thought he was going to do some of this last year, but he never had a chance.”

Sophomore Devin Stupples soared 19-feet, 4.5-inches in the long jump, nearly two feet further than his previous best, to edge Southwood senior Elijah Sutton (14.5) for the event win, and the two-point differential in the event keyed the meet win for Eastbrook’s boys. Stupples also finished third in the 110-meter hurdles.

Raikes teamed with senior Ruben Rangel and juniors Isaiah Dalton and Jarek Castillo in winning the 4x100 relay. Rangel was also second in the 400 and Castillo was runner up in the 100.

Senior Thane Syswerda and freshman Andrew Bryant ran third and fourth, respectively, in the 800 for Eastbrook, and finished fourth and fifth in the 1,600. Sophomore Jonathan Lora was fourth in the 3,200. Sophomore Weston James finished third in the 300 hurdles.

“Our distance kids are kind of young and inexperienced and nobody knows who they are because we’ve had some really good ones that have been out there before. They get better every meet now and that a good thing,” Goble said. “Our sprinters, as a group, had a pretty good night. Devin Stupples had a really good night tonight.

“When you come down to a close meet, in the end all those points really count.” he added. “Shot putters threw better tonight, Isaac Rans and Michael Zolman. Braxton came back in the discus. A lot of good performances tonight.”

In the girls meet, Howell made her Eastbrook Invite debut a memorable one by setting meet records in the 800 (2:31.10) and 1,600 (5:44.70) while Manning, freshman Emerson Chellis and juniors Camden Chellis and Allison Hiles set a meet record with a 52.7-second clocking in the 4x100 relay.

Goble and his coaching staff were pleased with how both Eastbrook teams performed and believe it’s a good starting point to figure out how to set event lineups later in the season.

“We don’t know for sure what all the kids can do yet so we’re trying to figure out kind of how the chess pieces go on the board to move around so the team part of it can be as good as it can be,” Goble said. “You can see what the individuals are going to do, the idea is when you move to the tournament is how can we maximize our points for the really important team stuff like conference and Grant Four.”

While there is always satisfaction in outperforming the competition and earning wins, watching his athletes compete, perform and celebrate after the trophy presentation in the middle of Eastbrook’s football field was particularly enjoyable for Goble.

“I think most importantly, our kids are just having a lot of fun,” he said. “After last year was robbed away from them, we’re doing school with masks on and all this stuff, it’s like there is no personality to stuff that’s going on.

“You miss seeing smiles out of the kids,” Goble continued. “Oh yeah we did good in the meet, but it’s just good to see them having fun. For a year, life’s been kind of hard … To watch them react like this, this is why sports are important. Not all the winning and losing stuff necessarily, but just to have some fun in life. The competition is great, but the smiles you see on the kids, it’s awesome.”

Southwood junior Bailey Wyatt won both the shot put and discus in the girls meet.