You are the owner of this article.
Edit Article Add New Article
You have permission to edit this article.
Edit
Home
News
Sports
Opinion
Obituaries
Classifieds
Jobs
Archives
e-Edition
Contact Us
Share This
1 of 4 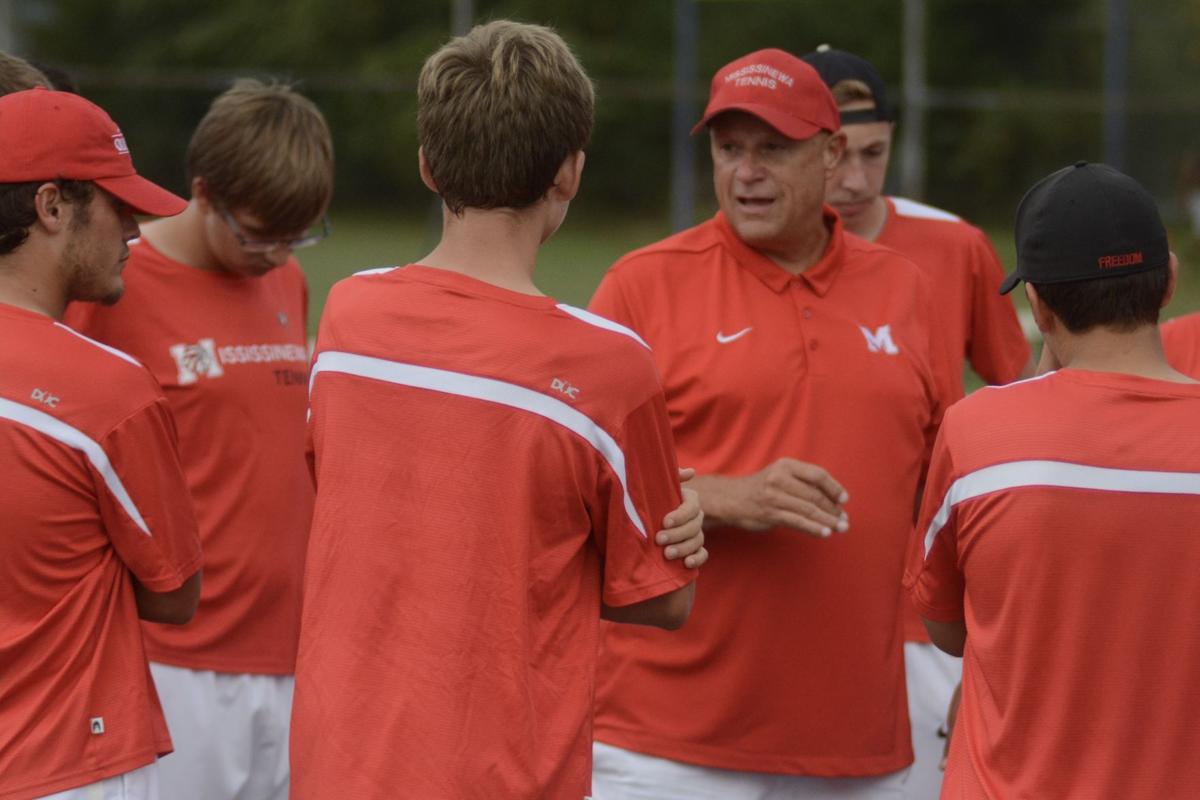 Mississinewa tennis coach Bruce Fleming talks to the Indians before their match against Lapel in the Marion Regional championship on Wednesday. The 25th-ranked Indians won 5-0 and claimed the first tennis regional title in school history. 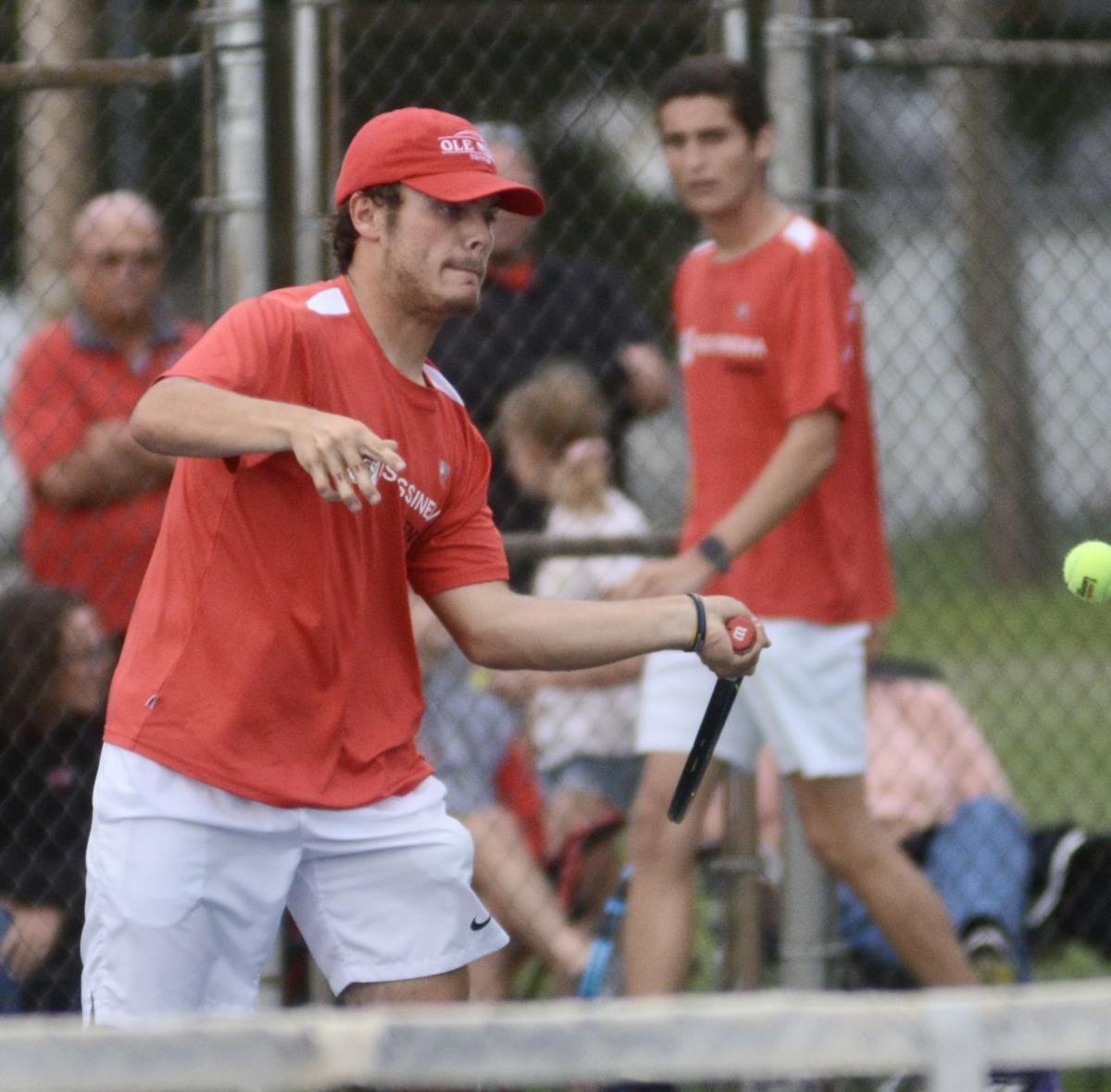 Mississinewa’s Ryan Scott hits a return in the No. 1 doubles match against Lapel Wednesday at Marion High School. Scott and his partner Ethan Sample won 6-3, 6-2 and helped the Indians to a 5-0 win and first regional championship in school history. 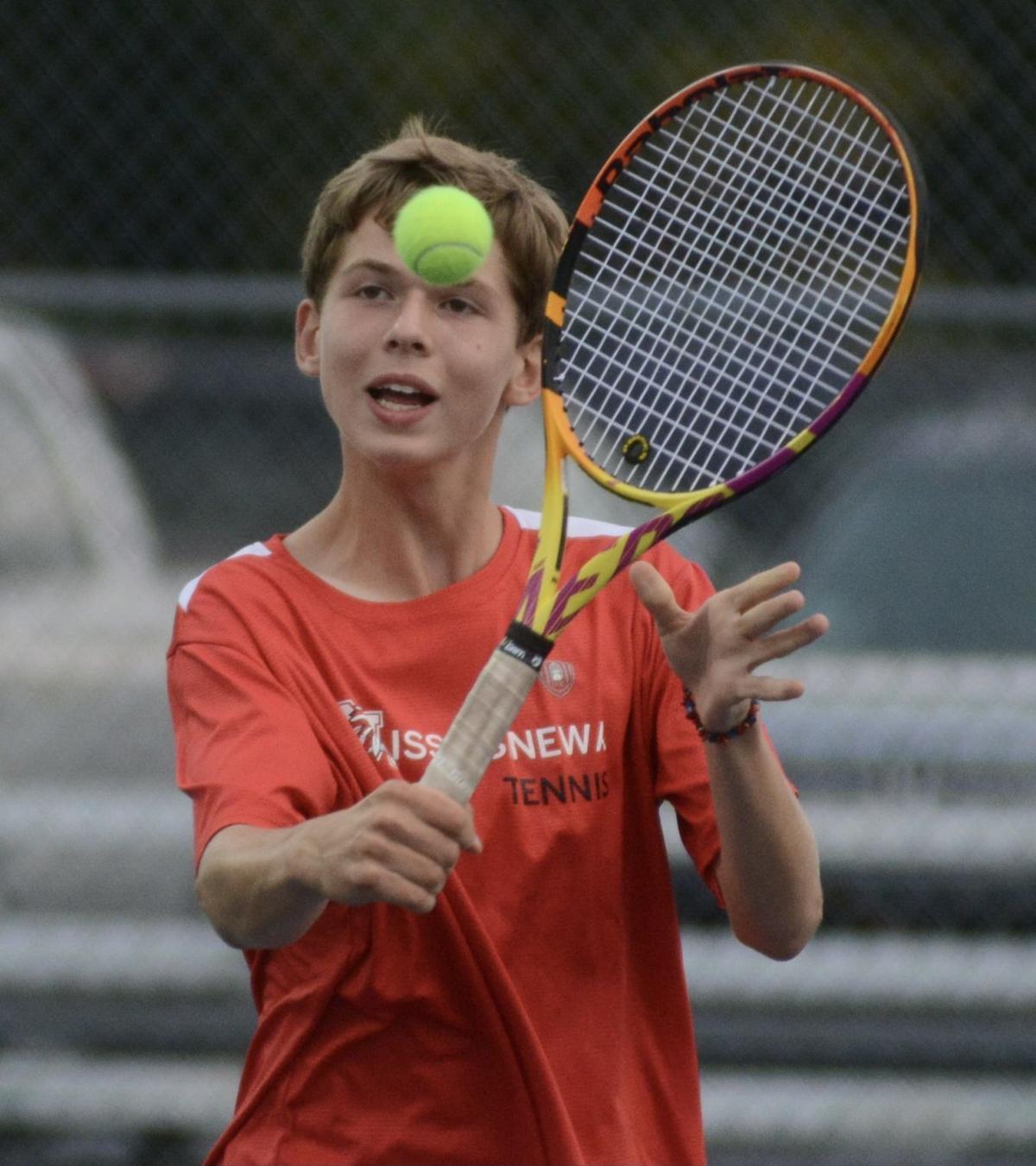 Mississinewa freshman Garrett Spencer hits a backhand at the net in the Indians’ 5-0 win over Lapel Wednesday in the Marion Regional championship match. 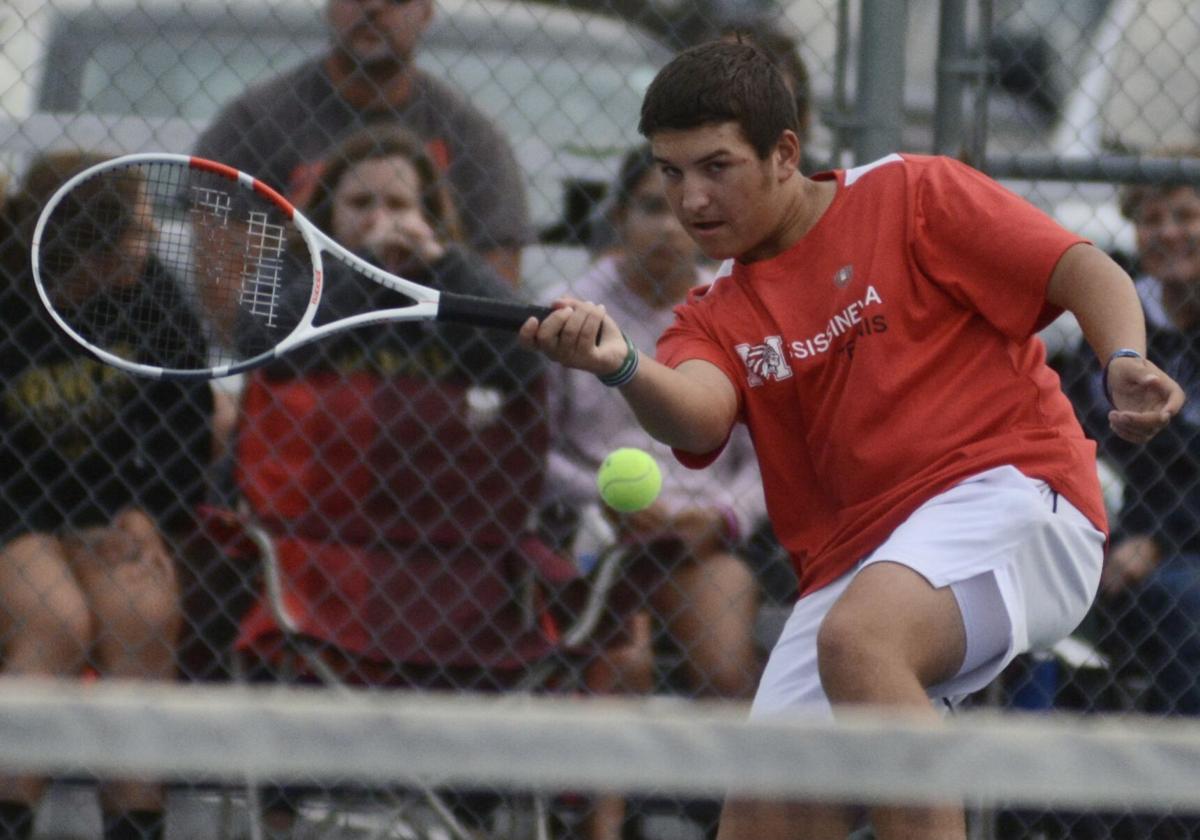 Mississinewa sophomore Kannen Smith hits a shot in the No. 2 doubles match in the Indians’ 5-0 win over Lapel in the Marion Regional championship on Wednesday.

Mississinewa tennis coach Bruce Fleming talks to the Indians before their match against Lapel in the Marion Regional championship on Wednesday. The 25th-ranked Indians won 5-0 and claimed the first tennis regional title in school history.

Mississinewa’s Ryan Scott hits a return in the No. 1 doubles match against Lapel Wednesday at Marion High School. Scott and his partner Ethan Sample won 6-3, 6-2 and helped the Indians to a 5-0 win and first regional championship in school history.

Mississinewa freshman Garrett Spencer hits a backhand at the net in the Indians’ 5-0 win over Lapel Wednesday in the Marion Regional championship match.

Mississinewa sophomore Kannen Smith hits a shot in the No. 2 doubles match in the Indians’ 5-0 win over Lapel in the Marion Regional championship on Wednesday.

The 25th-ranked Indians dropped only one set in a 5-0 triumph over Lapel and became the first Ole Miss tennis team ever, boys or girls, to put its fingerprints on a Marion Regional championship trophy.

The only surprise for Mississinewa coach Bruce Fleming is that none of his teams over the previous 17 seasons had been able to accomplish the feat.

“I believe. I believe every, single one of our teams could have made it here,” he shared shortly after being doused with a cooler of ice water, made a quick wardrobe change, then stood watching as the Indian tennis family took pictures with the new piece of hardware.

“Every time we get on the court I believe we’re going to keep fighting, we’re going to keep working and good things will happen,” Fleming continued. “It was nice to see a group stay together. It seems like we always get some strong players in strong spots, but we’re missing a spot.

Fleming’s five-strong affirmation not only pertained to his five seniors, but all five positions for the Indians this season.

Mississinewa’s victory over Lapel is its 20th of the fall – against just four losses – and it set another program record for wins in a season. The old record of 19-4 was established by the 2012 team.

Mississinewa’s five seniors put a decisive stamp on the regional championship then watched and cheered on the only underclassmen in the Indians’ lineup, sophomore Kannen Smith and freshman Garrett Spencer, as they rallied from down a set to finish off the sweep.

John Oliver scored the first point for Ole Miss, needing less than 45 minutes to finish off his 6-0, 6-0 win over Lapel junior Dakota Kimmerling at No. 3 singles.

Only about 15 more minutes elapsed before the Indians secured the win.

Hayden Rowley was next to finish, earning a 6-2, 6-0 decision over junior Isaac Bair at No. 2 singles. Literally seconds later, Riley Fuqua scored the clinching point, 6-1, 6-1 over sophomore Jacob Irwin at No. 1 singles.

Rowley and Fuqua had barely made their ways off their respective courts when Ryan Scott and Ethan Sample ended their match with Lapel senior Landon Bair and junior Corbin Renihan, 6-3, 6-2 at No. 1 doubles.

“We just wanted to stay together as a team. We knew it was definitely possible because we knew Delta had beaten Lapel before us,” Fuqua said. “We knew it was ours to lose.

“Honestly, we just had to play all-for-one, which has been our motto throughout the season. It worked and we got it through.”

Though their was some quiet smiles and tempered celebration shared among the five Ole Miss seniors, their coaches and the Indians’ junior varsity players after the first four matches had ended, attention quickly turned to the No. 2 doubles court were Smith and Spencer were making their comeback.

The two youngest Indians lost the first set, 6-2, to juniors Grant Humerickhouse and Mason Pointer, then fell behind 4-1 in the second set. But Smith and Spencer clawed back to take a 6-5 lead before eventually winning the second set 7-6, with a 7-5 decision in a tiebreaker.

Since the outcome had long been decided, Fleming and Lapel coach Justin Coomer agreed to have their No. 2 doubles teams play a 10-point pro-set in the third where Smith and Spencer claimed a 10-7 win to secure the final outcome.

“Winning our first regional championship, doing it 5-0 and making this the winningest season in Mississinewa history,” said Scott before pausing momentarily. “Two doubles worked their butts off coming back and that’s tough being a freshman and a sophomore.

Finding words to describe the feeling of being a regional champion didn’t come as easily as it was for the Indians to actually win the trophy.

“It means more than I could ever imagine,” Sample said. “I’ve always been the kind of guy that’s like, lets go out and have fun. Winning is secondary. But there’s something about this year, It means so much, definitely because I’m a senior, it means so much more and it’s nice to do it with these guys.”

Ole Miss carried the celebration away from Bill Beekman Courts back to Gas City, where they took a firetruck ride around town before returning to their home courts for a bit more festiveness.

The Indians now have little time before they’ll try to write an even bigger page in their history book: becoming the first ever Mississinewa athletic team to win a semi-state championship and advance to the state finals.

Mississinewa will meet No. 16 Westview in the Homestead 2 Semi-State at 10 a.m. Saturday in Fort Wayne. The winner moves into the eight-team state finals to play either No. 12 Jasper or Castle in the quarterfinals at Center Grove in Greenwood on Oct. 15 at noon.

Strategy and mindset won’t vary for the Indians as they venture into uncharted semi-state waters against Westview on Saturday.

“Mindset is just play Ole Miss tennis,” Scott said. “Coach Fleming always says to play your game, do what you do and that’s what we’re going to do. We’re going to go up there hit a few serves, hit a few forehands and back hands and see what happens.”

Fuqua added, “We’re gong to work hard like we always do, then go out and fight hard and hope the outcome comes our way.”