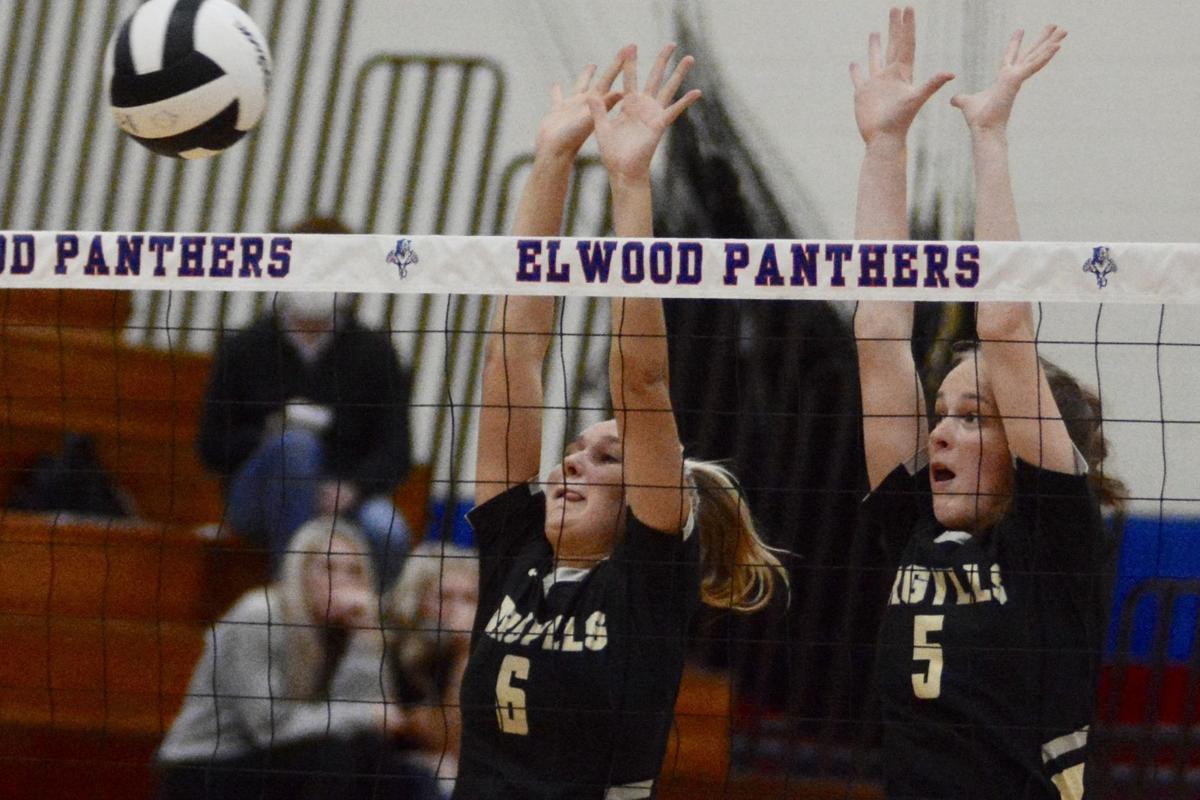 Madison-Grant's Emma Brummet (6) and Azmae Turner rise up for a block attempt in the Argylls' loss to Wapahani in the Class 2A Elwood Regional championship Saturday night. 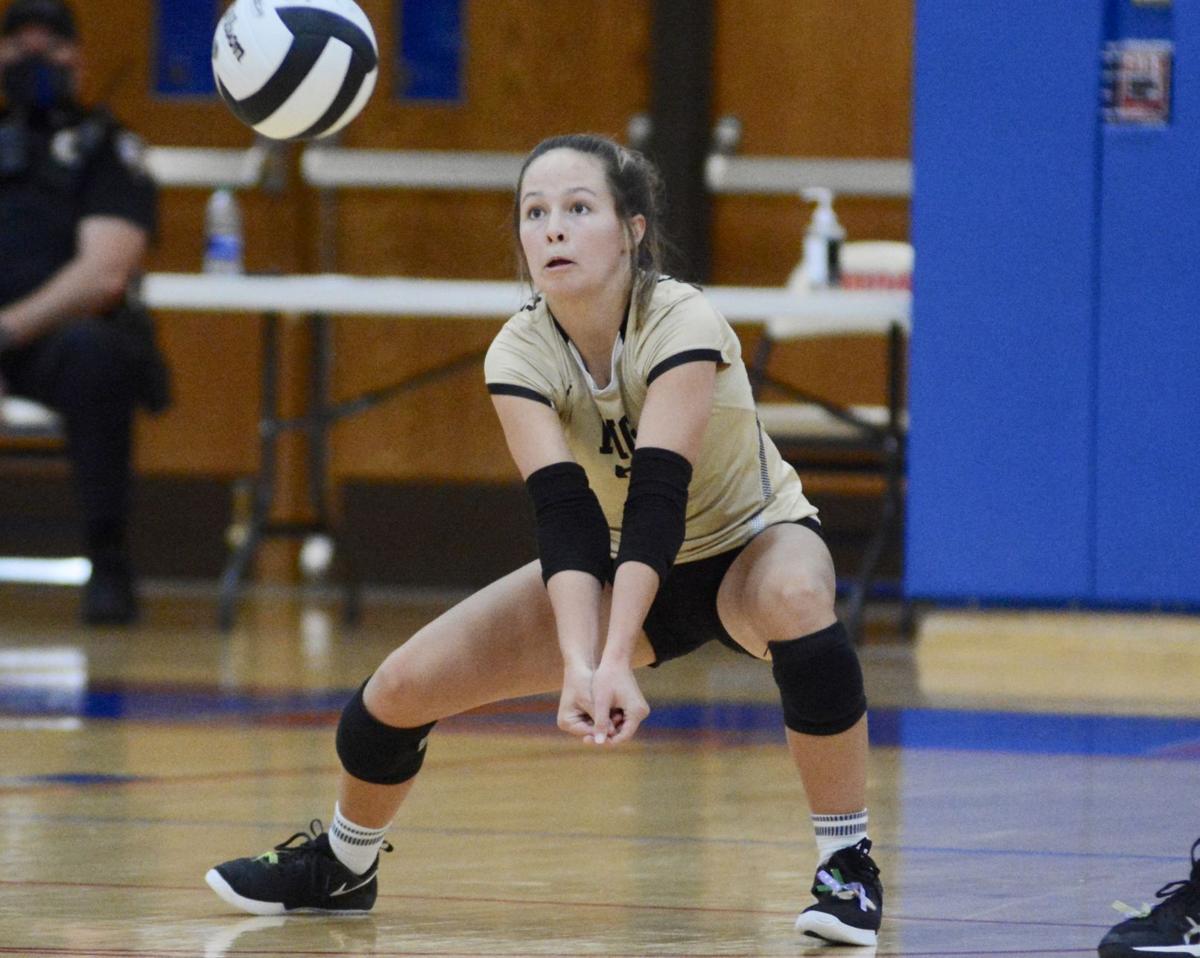 Madison-Grant's Daya Greene eyes and dig during the Argylls' loss to Wapahani in the Elwood Regional championship match Saturday night.

Madison-Grant's Emma Brummet (6) and Azmae Turner rise up for a block attempt in the Argylls' loss to Wapahani in the Class 2A Elwood Regional championship Saturday night.

Madison-Grant's Daya Greene eyes and dig during the Argylls' loss to Wapahani in the Elwood Regional championship match Saturday night.

ELWOOD — Momentum in volleyball is a powerful force, especially so in a battle between two evenly matched teams.

Wapahani seized momentum early on in its match-up with Madison-Grant for the Class 2A Elwood Regional championship Saturday night, and the fourth-ranked Raiders used an array of hot hitters combined with some uncharacteristic unforced errors by the No. 23 Argylls to assert control.

M-G fought hard to quell the tide of Wapahani’s momentum throughout the first two sets and found its competitive form late in the second.

But the big early deficit was too much for the Argylls to overcome and it resulted in Wapahani earning a 25-8, 25-17, 25-23 decision for its second-consecutive regional championship.

“They run a lot of faster offense than what we’ve been playing against, and we’ve explained that, but its a weird thing, it’s kind of a confidence issue,” explained M-G coach Kayla Jump of the slow start. “My biggest thing was that I have no idea why my team would not have confidence going into play.”

Madison-Grant played perhaps its best match of the season in a 3-0 semifinal sweep of Carroll Saturday morning, which was the Argylls’ ninth-straight win and 12th in their last 13 matches.

Jump also cited M-G’s regular-season meeting with Wapahani as reason her team should be confident. Wapahani needed a dramatic, 15-10, fifth-set win to overcome the Argylls in Fairmount on Sept. 16.

But after the teams exchanged the first two points of the opening set, Wapahani immediately started to gain control by scoring six of the next seven points to move in front, 7-2. The Argylls got no closer than four points, twice, before the Raiders pulled away with a 12-1 surge which included nine in a row to go up 21-6.

Wapahani’s tidal wave of momentum extended into a 7-0 run to begin the second set. Madison-Grant started to find its way back in with back-to-back kills by Katie Garringer and an ace from Gabby Rudy to pull within 8-4.

The Argylls could again draw no closer than four, at 14-10 and 21-17, before Wapahani got kills by three different players and an M-G error to close out the set.

Wapahani put down 22 kills, had five service aces and scored on four blocks in the first two sets, and took advantage of Madison-Grant’s 19 errors to reach the 2-0 lead.

“They (Wapahani) do a lot of good things. They serve hard and do everything quick, but we were trying to control us instead of trying to control them,” Jump said. “We were off balanced and don’t have confidence in what they’re supposed to be doing, that’s when you start making mistakes. We did do better as were were going, but you can’t wait. You can’t wait until you’re down a few points.”

With their backs against the wall, the Argylls put up a spirited and determined fight in the third set.

M-G took its first lead of the match at 5-4, then put together a 6-0 run started by Emma Brummet’s kill and ended with a kill by Alexis Baney and Grace Holmberg’s block.

The 13-8 lead was immediately trimmed down to two by the Raiders, but the Argylls held on to a slim advantage until Wapahani scored four-straight to go up 22-19. M-G pulled within 22-21 and 24-23 before Camryn Wise ended the Raiders’ sweep with a kill.

“It seems like when it’s bad, it’s real bad,” Jump said of the Argylls’ play. “They start worrying about themselves instead of worrying about the game. That’s something we really have to work on for next year.

“We almost beat them and I give my team a lot of confidence. It’s a little frustrating,” Jump said. “But they’re a good team so we can’t be disappointed.”

The most disappointing part of losing a regional championship for Jump is saying goodbye to her five seniors: Emma Brummet, Maloree Stanley, Emmie Alcala, Sydney Lee and Ashlyn Moore.

Aside from Brummet, a regular in M-G’s rotation who played key roles as a blocker, hitter, defender and with her serve, the Argylls’ seniors were often asked to play bit roles on the court.

However, Jump said her seniors have much more value to the Argylls than digs, passes and serves.

“The main thing we will lose from this is the leadership,” she said. “Because even the girls that don’t play a single point, every single time someone is coming off or at a timeout, they are giving such instruction. Sometimes they’re already telling them, coaching them.

“Going into next year we have a lot of opportunity to really take off where are we are, but I think leadership will be such a big thing,” Jump added, noting her six juniors. “We kind of have silent leadership, we don’t have (vocal) leaders. I have confidence that they will (develop).”

The Argylls finished the 2020 season with a 24-12 record and captured the Grant Four championship along with the 16th sectional championship in program history.

The Argylls were sharp, efficient and found a very good rhythm from the start of their regional semifinal match against Carroll (Flora) Saturday morning.

Madison-Grant’s biggest deficit in the entire match was two points and occurred early in the first set after Carroll scored three-straight points to go up 6-4, then again at 7-5.

A hitting error by Carroll sent Emma Brummet behind the service line and started a 7-0 run for M-G.

Alexis Baney and Grace Holmberg each put down a kill, Brummet followed with an ace and setter Gabby Rudy found an open piece of court with a tip shot to swing momentum fully in the Argylls direction. The run was aided by two more Carroll errors, and the Cougars pulled no closer than five points the rest of the set.

Carroll scored the first point of the second set but the Argylls scored eight of the next nine to quickly build an 8-2 lead. Madison-Grant then assumed full control with another 8-1 run. Homberg had two kills and three aces to help extend the Argylls’ lead to 19-6.

The Cougars would draw no closer than 21-11, and the Argylls quickly finished the set from there.

“We actually made some changes to some of our defense this week. We changed up what we normally do,” said Argylls’ coach Kayla Jump. “That’s kind of difficult to do. They did a good job of learning it and figuring it out this week.”

M-G scored the first four points of the final set, extended to a 10-4 lead. Then again with Brummet serving, the Argylls ran away from Carroll with an 8-0 run to go up 18-6. The Cougars twice drew within nine, the final time at 22-13. Azmae Turner had a kill and a block before the match ended on a Carroll error.

Unofficially, Turner led M-G with 12 kills. She also had two aces and a block. Katie Garringer finished with 10 kills and a pair of aces while Holmberg added nine kills and three aces. Baney had five kills and four blocks. Rudy dished out 38 assists and, along with Brummet, had three aces.