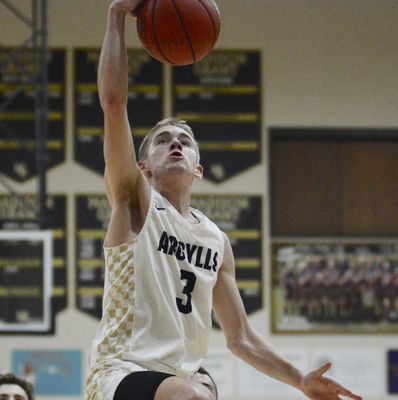 Scott Hunt/shunt@chronicle-tribune.comBUCKET: Madison-Grant's Grant Brown lays up two of his 16 points in Saturday's game with Northfield. Brown also dished out 13 assists and grabbed 10 rebounds for a triple-double in the Argylls' 71-39 win over the Norsemen in Fairmount. 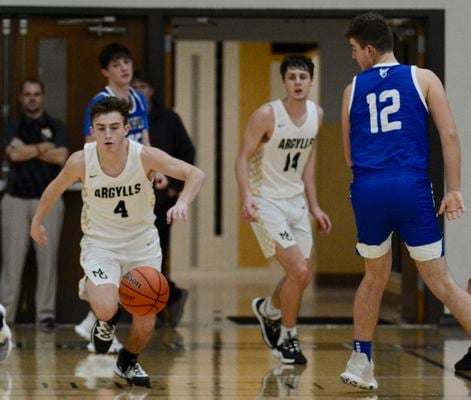 Scott Hunt/shunt@chronicle-tribune.comSTEAL: Eli Lutterman chases down one of the 15 steals Madison-Grant made in its 71-39 win over Northfield on Friday in Fairmount. 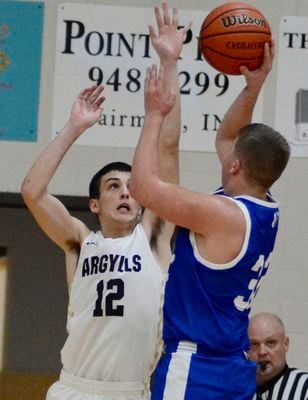 Scott Hunt/shunt@chronicle-tribune.comDEFENSE: Madison-Grant's Seth Lugar contests a shot by Northfied's Jarret Shafer in the Argylls' 71-39 win on Saturday in Fairmount.

Scott Hunt/shunt@chronicle-tribune.comBUCKET: Madison-Grant's Grant Brown lays up two of his 16 points in Saturday's game with Northfield. Brown also dished out 13 assists and grabbed 10 rebounds for a triple-double in the Argylls' 71-39 win over the Norsemen in Fairmount.

Scott Hunt/shunt@chronicle-tribune.comSTEAL: Eli Lutterman chases down one of the 15 steals Madison-Grant made in its 71-39 win over Northfield on Friday in Fairmount.

Scott Hunt/shunt@chronicle-tribune.comDEFENSE: Madison-Grant's Seth Lugar contests a shot by Northfied's Jarret Shafer in the Argylls' 71-39 win on Saturday in Fairmount.

The Argylls' used both full and half-court trapping pressure to force the Norsemen into 25 turnovers, 15 on steals, and M-G ran its way to a 71-39 win.

Brown led the Argylls' to a 43-23 rebounding advantage.

"He did great job. He threw one little behind the back pass early and he turned it over and I took him out and chewed on him a little bit," Trout said of Brown. "He just said 'Yes sir' and when his couple of minutes was up on the bench he went back in and took care of business and played really, really well."

Three pointers by Clayton Tomlinson and Jarret Shafer helped Northfield jump to a 6-2 lead in the first couple minutes, but the Argylls answered with a swift 10-0 run in less than three minutes and would lead the rest of the way.

Kaden Howell converted a 3-point play then scored after steal an assist by Brown. Lance Wilson followed with 3-pointer before Brown worked into the lane and made a nice dish to Justin Moore for two that gave Madison-Grant a 12-6 advantage.

Graydon Holmes scored four straight to help the Norse close within two, but Brown's first bucket and a 3-pointer by Jackson Manwell gave M-G a 17-10 lead after one quarter.

The Argylls scored the first four points of the second quarter on baskets by Howell and Brown to take their first double-digit lead then limited Northfield to just six points in the period to extend to a 30-16 lead at halftime.

Madison-Grant secured its win in the third quarter with a 19-5 run over the final six minutes to assume command at 54-25 entering the final eight minutes.

"They're really good and we knew that," said Northfield's second-year coach Rick Brewer of Madison-Grant. "They average 70 and I told my boys that you're going to have to really play well to hold them under 70. Blackford couldn't do and Blackford is pretty darn good. I knew that's the way it was going to be tonight, we couldn't make mistakes.

"But this is a monumental step compared to what was last night," Brewer added, referring to Northfield's 65-32 loss at Tippecanoe Valley on Friday. "No offense to Valley, but they're a lesser opponent compared to Madison Grant and Valley beat us the same way. Your effort can't be that way so tonight we talked about if you don't commit you sit. If you didn't want to defend or didn't run the offense the way we wanted you were going to sit. I thought tonight was a whole lot better."

Shafer finished with 13 points to lead the Norse while Tomlinson and Holmes chipped in 12 and 10, respectively. Holmes also pulled down eight rebounds through Madison-Grant outrebounded Northfield, 43-23.

"I thought Graydon Holmes was really good," Brewer said. "He's been having some visits with the bench and I think maybe he turned the corner tonight."

Madison-Grant also entered the game off a loss, 93-74 at Blackford on Friday and Trout was pleased with the way the Argylls bounced back.

"They came out focused, ready to go," he said of his. "A little bit of a slow start, but we got going and it wasn't bad at all. You kind of expect that on a double weekend. It really doesn't matter who your first game is on Friday, its not always easy coming out and hitting on all cylinders to start out with on Saturday. We got going and we're real pleased with how we played."

"Justin hit the boards big time and did good job of finding holes in their defense so we could dump down to him," Trout said. "We love to get out in transition and to be able to do that, the first thing you have to do is rebound the basketball. You can run when the other team scores, but you can't get out as quick.

The Argylls won the JV contest 64-18 behind 17 points from Zach Pretorius and 11 by Cade Pretorius. Eli Kroh led Northfield with four points.

Northfield (2-8) has a home date with North Miami on Friday.