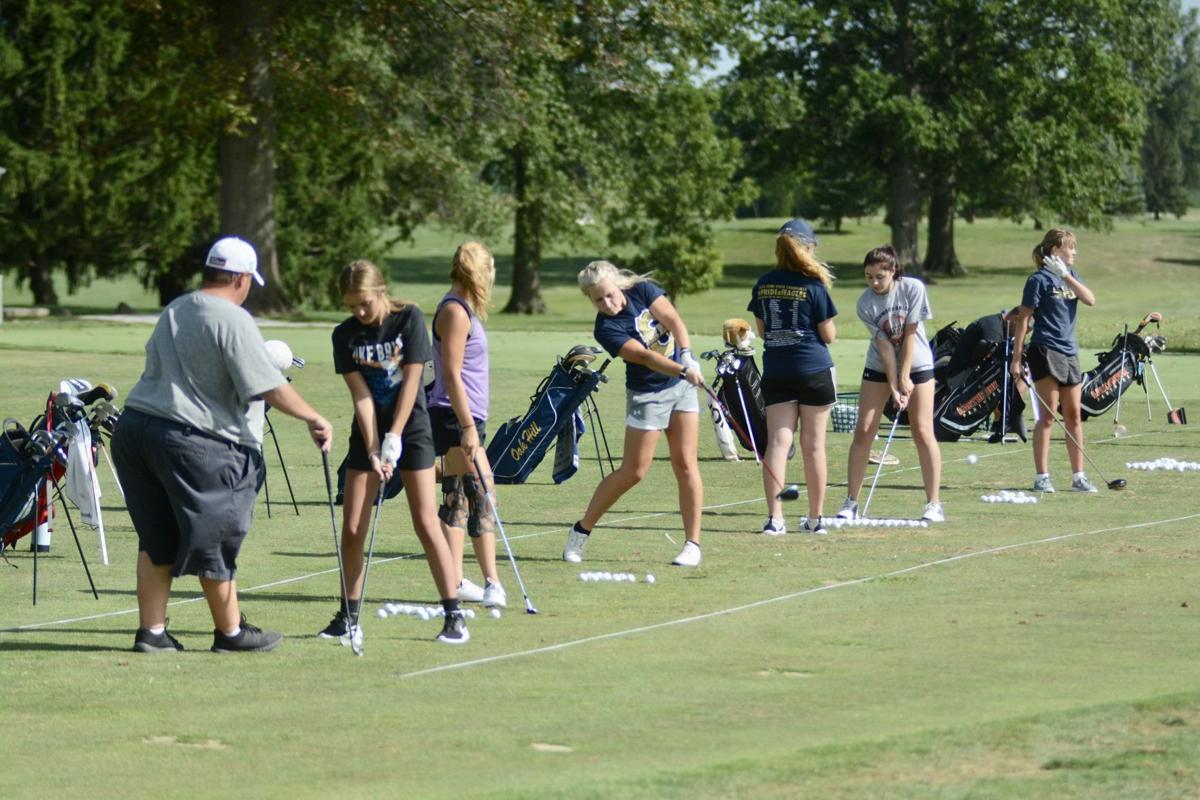 The girls golf teams from Oak Hill and Eastbrook share the driving range at Arbor Trace Friday evening in prepping for the 2020 season which begins next week. 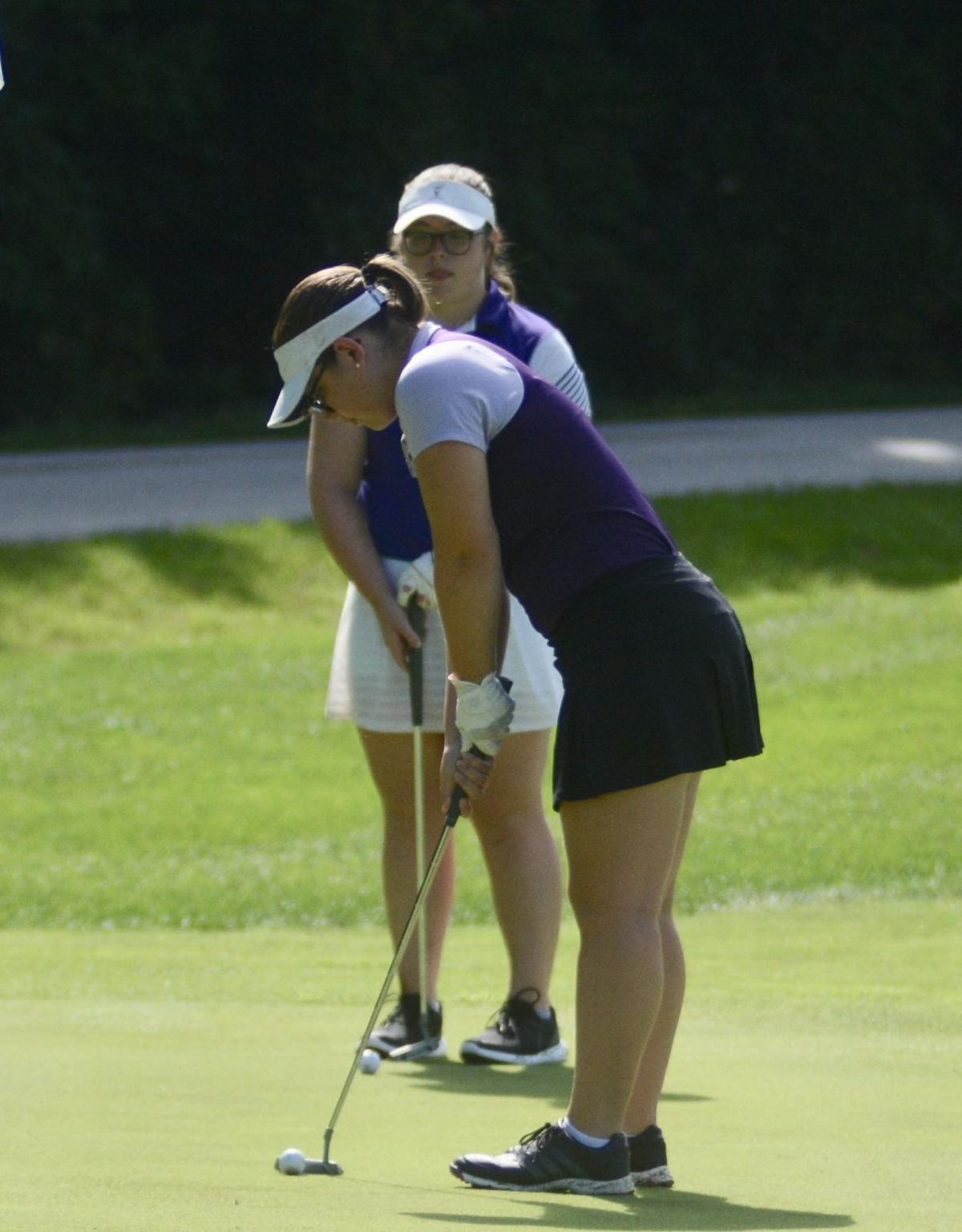 The girls golf teams from Oak Hill and Eastbrook share the driving range at Arbor Trace Friday evening in prepping for the 2020 season which begins next week.

A touch of fall in the air greeted some of Grant County’s high school girls golf teams Friday morning as they took to their respective home courses for the first official day of practice for the 2020 season.

However, unlike all other fall sports which begin practice on Monday and have nearly two full weeks of practice time before beginning competition, the official preseason for girls golfers is brief.

Four of the county’s teams will have one or more competitions complete in the next seven days while Eastbrook starts on Aug. 11.

After playing last season with only three girls, the Giants will likely be able to compete this season with potentially five or six girls.

Two of the three players from last season, senior Bayley Grieve and her sophomore sister, Savannah Grieve, return to fill out the top of the Giants lineup. Freshmen Jessica Wilson and Hayleigh Kirkwood are also out for the team this year and Giants coach Jerry Freshwater said he’s spoken with two more girls who are interested in playing but still in the process of getting their physicals.

Freshwater is excited about his team and being able to compete in team competitions.

“It’s really encouraging,” said Freshwater as he worked with three of his players Friday morning at Meshingomesia, the Giants home course. “It’s been great on having the four girls that have been coming to every open gym we’ve been having on Monday and Thursday. With everything that’s been going on, its been encouraging.”

Bayley Grieve has been a part of the Giants’ lineup since her freshman season, and has made good strides in improving every season. Freshwater said Savannah Grieve has also improved from last year and Kirkwood, who has yet to play competitively, has experience playing with her parents.

Freshwater is extremely pleased with the make-up of his team and excited about their futures on and off the course.

Marion opens its season on Tuesday in the Huntington North Invitational.

Indians’ coach Troy Simpson is also excited about the prospects of his team.

Ole Miss returns senior Maggie LaBarr, who has been his No. 1 player her whole career, along with senior Anabella Panell, a varsity player for the past three years.

“I haven’t had a lot of those so this is nice to have that leadership,” Simpson said of his four-year starter seniors, “somebody who knows the ropes and can take the ones who haven’t been here that long aside and say this is what you need to do.”

Even more encouraging for Simpson is that LaBarr, Pannell and Brubaker have spent time on the golf course this summer and he’s excited about the Indians’ potential.

“They’re pretty high,” he said. “I’m little bit more reserved in saying that, but deep down inside, it’s because of the experience that we have.

“I’d love to win the Grant Four. That’s always important because we play those guys so much,” he added. Conference … I would like to be top three and I think we could with our experience.”

Mississinewa opens its season on Friday in a three-way match with Marion and Madison-Grant at Walnut Creek.

Coming out of the Panthers’ most successful era of girls golf in the school’s history, coach Adlai Deisler has tempered his expectations for this season.

Eastbrook returns four of its top five players from a year ago, losing only Allyssa McKinney to graduation, but Deisler is keeping his goals for the Panthers relatively simple.

“As a team, my thought would be just be competitive,” Deisler said. “I’m not sure where anyone (opponents) is at, though I’m assuming Oak Hill is going to be the team to beat this year (in the county). I don’t know that we have any massive team goals other than to be competitive.”

The experience in the Panthers lineup should help them do just that.

Eastbrook returns seniors Andrea Spurlock and Savannah Goble along with juniors Hayley Jarck and Abbey Cansler. Freshman Jozlynn Reyes, who is new to the game of golf, will fill out the Panthers roster.

“My approach traditionally has been to let them find the game,” he said, noting he concentrates mostly on short game with beginners. “From there you will often find that kids either have passion or they don’t. And if they have passion, you’re instruction will turn into something they take care of on their own.”

Eastbrook hosts Bluffton in its first match on Aug. 11 at Arbor Trace.

The Argylls are in a similar position to their CIC-rival Eastbrook.

Coach Mike Small returns four of his top five players, though the loss to graduation of Kasey Cleaver, who became the first golfer in M-G history – boy or girl – to win an individual sectional championship last season, leaves big shoes to fill.

“We’re going to miss Kasey quite a bit with her leadership and ability to place well in tournaments,” Small said. “Abbie played well in some tournaments. She medaled in some bigger tournaments and I kind of look for her to be our leader out of the gate. It kind of depends on how our two Allies, how they come on.

Madison-Grant hosts Eastern on Wednesday at Walnut Creek to start a season-opening stretch of three matches in three days. In fact, the Argylls will play a third of their matches in the first two weeks.

Small said his satisfaction for the season won’t be tied to wins and losses.

“If we can be around .500 or so, I’d be pleased with that,” he shared. “I know Oak Hill should be decent with Hope (Mygrant) and Holly (Gillespie), but I think everybody else is going to be looking for consistency.”

The Golden Eagles, at least on paper, appear to be Grant County’s top team.

Seniors Hope Mygrant, a 2018 state finalist, and Holly Gillespie, a regional qualifier last season, are two of coach Nelson’s three seniors and a big reason why Oak Hill is being highly regarded among its county peers.

The Eagles also return senior Bailey Dewitt and junior Abby Malott from their sectional lineup last season and will round out the roster with junior Savanna Saylor and freshman Jaycie Pearce.

“Having the experience really helps. Just knowing what it feels like to play a different places, at least for all the seniors, they’ve played all the places we’re going to play,” Nelson said. “It’s a great thing to have the experience.

“The good part with these girls, a lot of them have played most of the summer too,” he added. “It’s not like they just started playing.”

Mygrant turned in a stellar junior season, winning medalist honors in all but two of Oak Hill’s matches: the Huntington North Invite and Eastbrook Sectional. Her 92 at Arbor Trace in the sectional was a bitter end to her season. She missed advancing to regional by a single shot after Gillespie shot a 91 and earned the spot.

If Oak Hill is going to compete for Grant Four, CIC and sectional championships, Nelson said it will on the backs of his three seniors.

“I would say we’re going to go with Hope, Holly and Bailey. Their three scores will compete with everybody in the CIC,” Nelson said. “Grant Four will be another close tournament, I think we’re all pretty similar in capabilities and skills. … If our number four and five positions can throw in some good scores, we’ll have a chance to compete.”

Oak Hill opens the season on Monday at the Harrison Invite in Lafayette and will join Marion at the Huntington tourney on Tuesday.