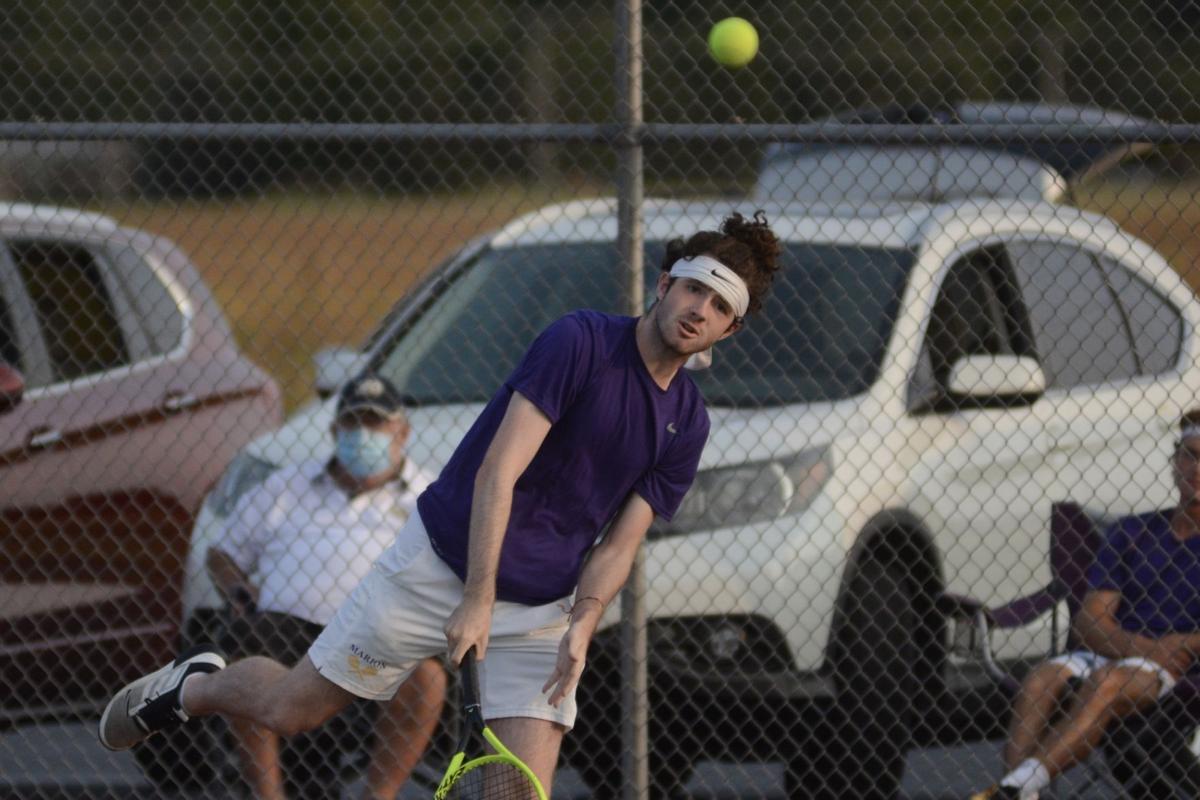 Marion senior Soren Bruehler serves in his No. 1 doubles match at Madison-Grant Tuesday evening. The Giants topped the Argylls 3-2. 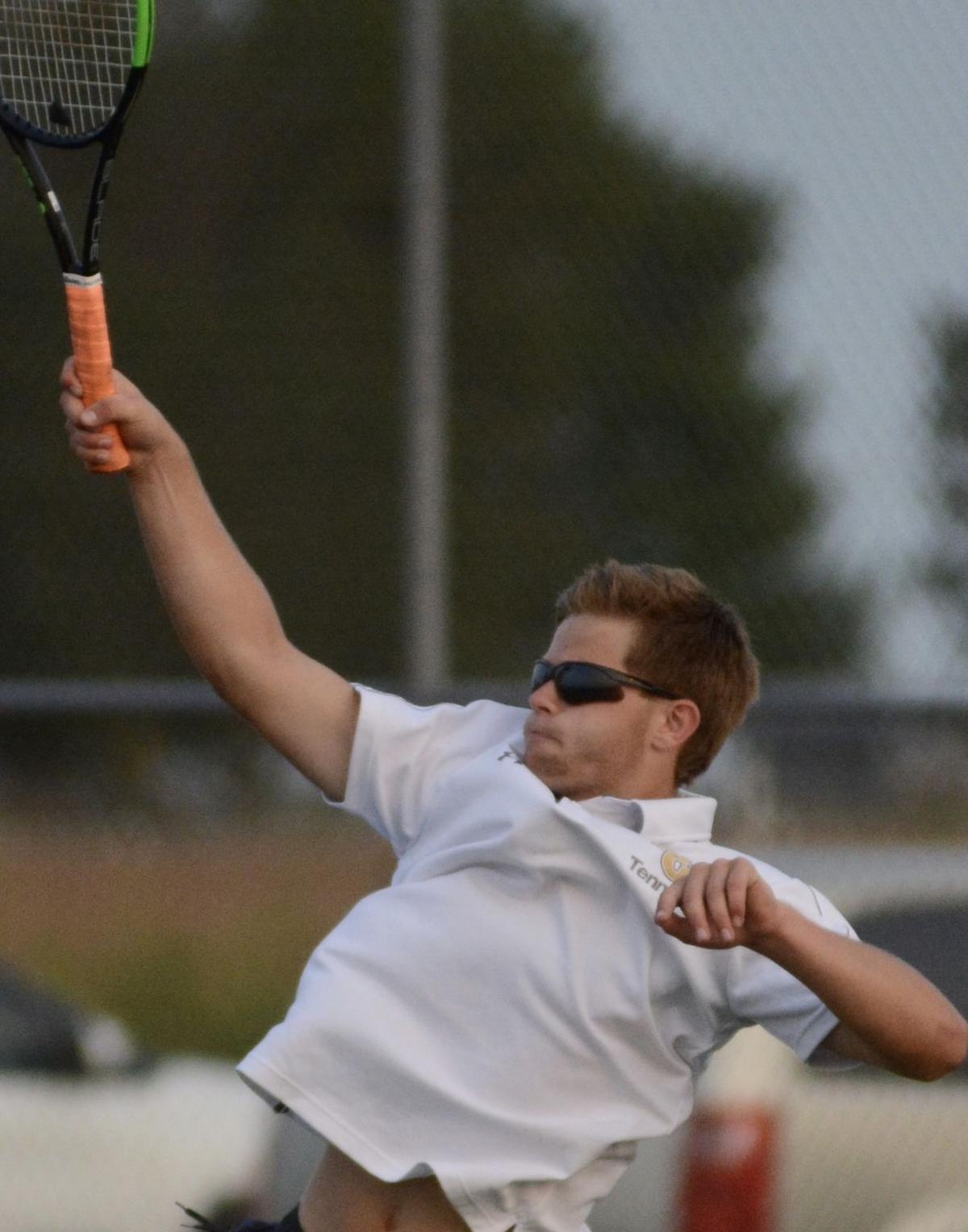 Madison-Grant junior Mason Richards watches a return shot in his No. 2 doubles match against Marion on Tuesday in Fairmount. The Giants edged the Argylls, 3-2.

Marion senior Soren Bruehler serves in his No. 1 doubles match at Madison-Grant Tuesday evening. The Giants topped the Argylls 3-2.

Madison-Grant junior Mason Richards watches a return shot in his No. 2 doubles match against Marion on Tuesday in Fairmount. The Giants edged the Argylls, 3-2.

FAIRMOUNT — The Marion boys tennis team will definitely be the favorite to win its third-straight sectional when the postseason arrives on Sept. 30.

In keeping the trophy away from county-rivals Madison-Grant and Mississinewa, the Giants margin for error appears minimal, at least according to regular season results.

Marion earned a 3-2 win over the Argylls on Tuesday just two weeks after topping Ole Miss by the same score on Sept. 1.

Constants in the equation of both triumphs are Marion’s top two singles players, Vikram Oddiraju and Jack Fauser.

The senior duo dropped just a game apiece in quickly earning two points in dominant fashion, as they’ve done in nearly all of the Giants’ dozen wins.

“The best part of Vikram and Jack is the No. 12 next to their names, meaning they’re not back after this year,” said M-G coach Tony Pitt with a laugh, but also in all seriousness. “They’re great kids. I remember seeing them when they were in fifth or sixth grade.”

Junior Alex Spitzer scored the Giants’ match-clinching point with a 6-2, 6-1 decision over Jackson Manwell at No. 3 singles while both doubles matches were just heating up.

“Our singles really, really played well. Our singles have been on a roll for many matches now,” said Giants’ coach Doug Porter. “Just excellent singles play from start to finish.

“We knew singles has been a strength of Madison-Grant all year long, but they’ve been our strength too. We were strong from the start. We wanted to get off to a good start on our singles courts and we did.”

Porter was encouraged by the play of his No. 1 doubles team, not so much by his No. 2 team, but both matches were dogfights from start to end.

It was Bruehler and Maki’s third match together since Porter put the latter in his lineup for the first time on Saturday against Richmond. The duo earned Marion’s first point at the No. 1 doubles spot all season against Anderson on Monday.

“Tonight was the best effort we have gotten from our one doubles team all year, by far,” Porter said. “We were in position at the end of each set to capitalize. Technically, we’re not doing some things right in doubles that we need to work on. But we had a lot of effort and a lot of heart.”

“We tried a little more lobs and tried to push them back,” Pitt said. “Marion’s two doubles is very aggressive, getting on top of the net and taking over points to begin with, so we were trying to push them back. In return it would give us some opportunities to get some short balls. For the most part they executed it pretty well.”

Richards and Hull executed well enough to rally and win the second and third sets by a 6-3 score in each.

“I think we just kind of felt like Madison-Grant was going to hand it to us,” Porter said. “They changed tactics and changed strategy and we just didn’t know what to do and gave too many points away. … Not happy with our play there at No. 2 doubles.”

Before the Giants (12-1) start to think about sectional and a potential rematch against M-G, they’ll face Kokomo at 10 a.m. on Saturday in Lafayette in a North Central Conference tournament semifinal match. The winner meets either No. 12 Harrison or Richmond in the championship around 1 p.m.

“We still have so many areas we need to improve on so we can be better on Saturday,” Porter said. “Try to win that semifinal match and get a chance to compete for the conference championship. We have a lot to work on. Madison-Grant pushed us tonight and they’re having a great year.”

“What was great about Saturday was it was a whole team event,” Pitt recalled. “Blackhawk, all three of their singles players were solid so we had to win three singles and both doubles to win that match.

“Then we turn around and a half hour later we have to win all three singles matches to beat Northwestern, with their doubles being strong,” he added. “It was nice being able to count on, not just three spots like we have in the past, we were able to count on the whole team.”

The Argylls host NCC opponents Logansport on Thursday and Kokomo on Monday.