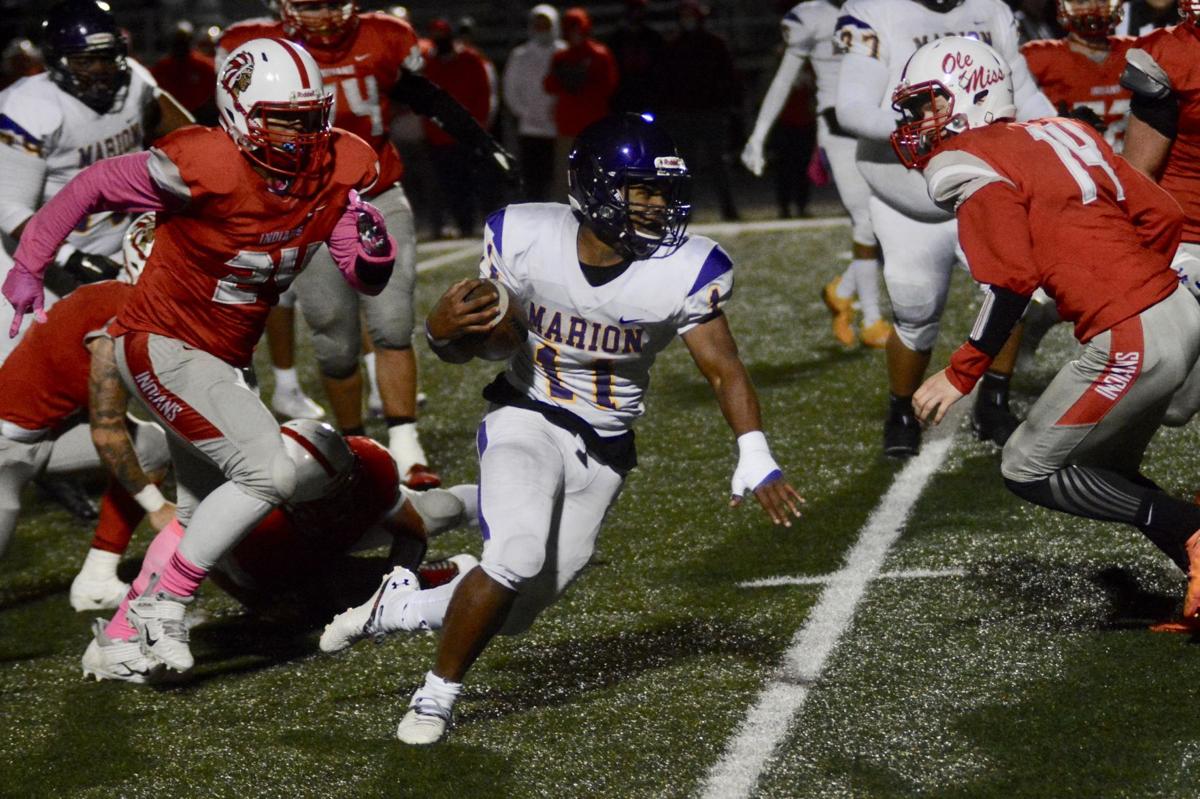 Marion’s Khalid Stamps runs between Mississinewa’s Dakota Ancil (24) and Andre Sallade for part of his 215 rushing yards Friday night. The Giants topped the Indians, 49-28 in Gas City to open play in Class 4A sectional 20. 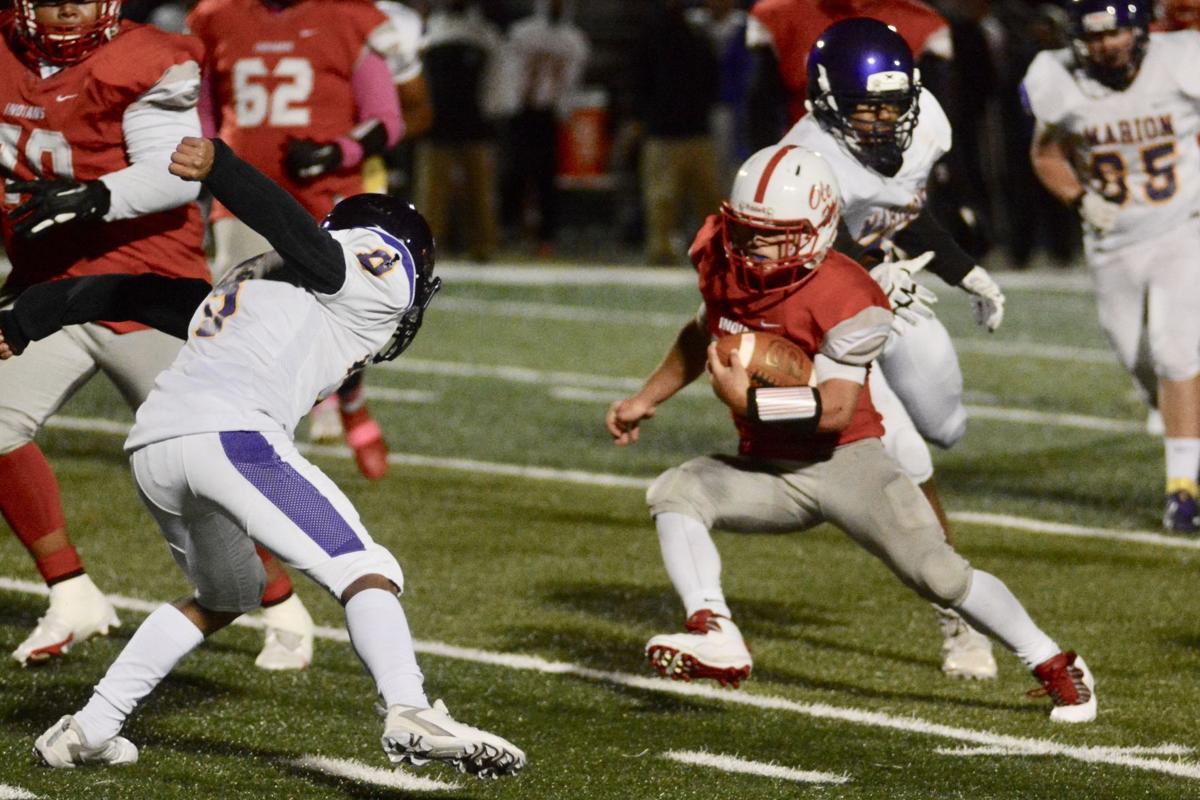 Marion’s Khalid Stamps runs between Mississinewa’s Dakota Ancil (24) and Andre Sallade for part of his 215 rushing yards Friday night. The Giants topped the Indians, 49-28 in Gas City to open play in Class 4A sectional 20.

GAS CITY — Tempo and speed provided a winning combination for Marion Friday night in the opening round of Class 4A football sectional 20 at Mississinewa.

The Giants rushed for nearly 400 yards and five touchdowns, a performance jump started by using fast-paced, no-huddle offense for much of the first half, en route to earning a 49-28 win over the Indians.

“We do a lot of different things, we’ve got three or four packages that we use. We used what we had to to use and that did make a difference for us,” said Giants coach James Bell of his fast-paced offense. “That is our tempo package and we put as much speed on the field as we can.

“It makes it tough sometimes because you’re sitting there thinking which way do I go and who do I go with?”

Bell divvied up 57 carries between six Giants who combined to amass 389 rushing yards.

“He was a man out here,” said Ole Miss coach Kyle Buresh of Campbell. “All week I’ve been, ‘Hey I need you to be the toughest man on the planet this week.’ That’s exactly what he was tonight.”

Both offenses started a little slowly, but it didn’t last too long.

The Giants went three-and-out, twice, with the first possession of the game. A short punt on the first set of downs bounced off a Mississinewa player and was recovered by a Giant. Even with an encroachment penalty on Ole Miss after the turnover, Marion couldn’t pick up a first down.

The Indians also went three-and-out on their first possession, and the Giants decided to pick up the tempo after the Ole Miss punt.

“That definitely caught us off guard and they did a great job with that,” Buresh said of Marion’s quick-paced offense. “I should have probably called a timeout to settle our guys down earlier in that drive and get them rolling.”

The Giants used 11 plays and 3:40 off the clock to move 80 yards and take a 7-0 lead on Malachi Silmon’s 2-yard run and Kyle Coryea’s point-after kick with 3:12 to play in the opening quarter.

Mississinewa answered with an 8-play, 68-yard drive culminated by Campbell taking a short pass from Landry Rock and scoring from 21-yards away with under a second to play in the first quarter. Andre Sallade provided the PAT to tie it up at 7-7.

Marion put together its best drive of the night to start the second quarter, a 13-play, 82-yard march that took more than four minutes off the clock. Ty Coleman swept around the left end and scored from 16-yards out to give the Giants a 14-7 advantage.

The next two scores came in rapid succession.

Campbell sprinted 73-yards for a touchdown on the Indians’ first play after kickoff, then Stamps responded with a 65-yard TD run on the Giants’ second play to keep Marion up 21-14 with 6:38 remaining in the first half.

Marion’s defense forced a three-and-out on Ole Miss’ next possession and the offense followed with a 7-play, 44-yard drive that ended with Stamps scoring from 2-yards and 2:43 remaining.

The Giants took their 28-14 lead to halftime.

Mississinewa picked up one first down on its first possession of the second half, but a holding penalty set the Indians back and eventually forced a punt.

The Giants covered 49 yards in seven plays and went up 35-14 on a one-yard plunge by Silmon just over five minutes into the second half.

Campbell capped a 10-play, 67-yard drive with a 34-yard touchdown run on fourth down to pull the Indians within 35-21 with just 3.5 seconds to play in the third quarter.

The Giants managed to pick up one first down on their next drive before Coryea unleashed a 61-yard punt that put Mississinewa on its own 11-yard line.

On the second play after the punt, Coleman intercepted Rock and returned it 20 yards for a touchdown to push the Giants in front 42-21 less than three minutes into the fourth quarter.

The Indians turned it over on downs but quickly forced the Giants to punt again. Coryea’s 47-yard punt was downed at the one-yard line.

A bad snap was recovered by Marion’s Jekwan Williams in the end zone with just over five minutes remaining to give Marion a 49-21 advantage.

Campbell capped the scoring and his huge night for the Indians with a 17-yard TD run with under a minute remaining.

“What hurt us was we had some discipline things with some penalties,” Buresh said. “We went a little bit more of a heavy personnel and were grinding really well. We got behind the sticks too many times and that hurt us.”

Rock carried 14 times and picked up 67 yards for Ole Miss but completed just 2-of-15 passes.

The Indians were penalized eight times for 60 yards and had four turnovers.

The Golden Eagles won for the sixth-straight time in 2020 and earned the program’s first-ever win in the Class 3A tournament Friday night in Decatur.

Oak Hill’s defense was dominant nearly the whole game in recording a shut out for the second week in a row, but the offense struggled to get going in the scoreless first half.

“We gave up a pretty long drive to start the game. It was one of those things we had to adjust to their speed,” said Oak Hill coach Bud Ozmun. “It’s hard to simulate what they do in practice. We got a turnover in the red zone then for the rest of the half it was 0-0. The defense for four quarters really played well.”

The Eagles got their offense going immediately after halftime and took a 7-0 lead on Clay McCorkle’s 58-yard touchdown pass to Kian Hite.

Oak Hill added three rushing touchdowns in the second half, two by sophomore Kyle Turanchick and another from senior Blake Fox, to pull away for the win. Mark Sevier was 4-for-4 on extra-point kicks.

Turanchick continued his impressive sophomore campaign by rushing for 152 yards on 19 carries.

“We made a couple of blocking adjustments. They were doing some things to really take us out of our pulling game,” Ozmun said. “We adjusted a few things blocking and went a little more just straight ahead and we were able to break a couple of long runs.

“We were able to hit Kian Hite on a seam route and that kind of loosened up the run defense,” he added. “We were able to take advantage of that once we got them to respect the pass a little bit more.”

Hite also intercepted two passes for Oak Hill’s defense in the second half, while Fox and Armando Rademaker each recovered a fumble.

Oak Hill (7-3) will host Fort Wayne Concordia Friday in a sectional 27 semifinal game. Concordia was awarded a first-round forfeit because of a COVID-19 outbreak endured by Peru.

The No. 2 Panthers dominated the visiting Bruins for the second time in less than a month to begin defense of their sectional 36 championship.

Eastbrook picked up 338 yards of total offense, 249 on the ground, and limited Blackford to just 78 yards and four first downs in the contest.

Senior Alden Miller touched the football just three times in the game, all in the first quarter, and each time it resulted in a touchdown.

The Panthers increased the lead to 55-0 by halftime. Jason Hale scored on a 9-yard run, Isaiah Dalton added a 37-yard TD run and Justin Starr scored on runs of five and two yards while Kaleb Tate recovered a fumble for a touchdown 1:56 before halftime.

Engle completed 3-of-4 passes for 89 yards. Hayden Raikes had two catches for 60 yards.

“There was just a big difference between our offensive and defensive lines compared to theirs. We were just a lot stronger tonight,” said Eastbrook coach Jeff Adamson. “Both of those groups maybe started (the season) out a little rough against Marion and Delta, but I think since those two games they have gotten better each week.”

Eastbrook (9-1) travels to No. 11 Tipton on Friday for a semifinal matchup. The Blue Devils beat Elwood, 40-0, to open sectional play.