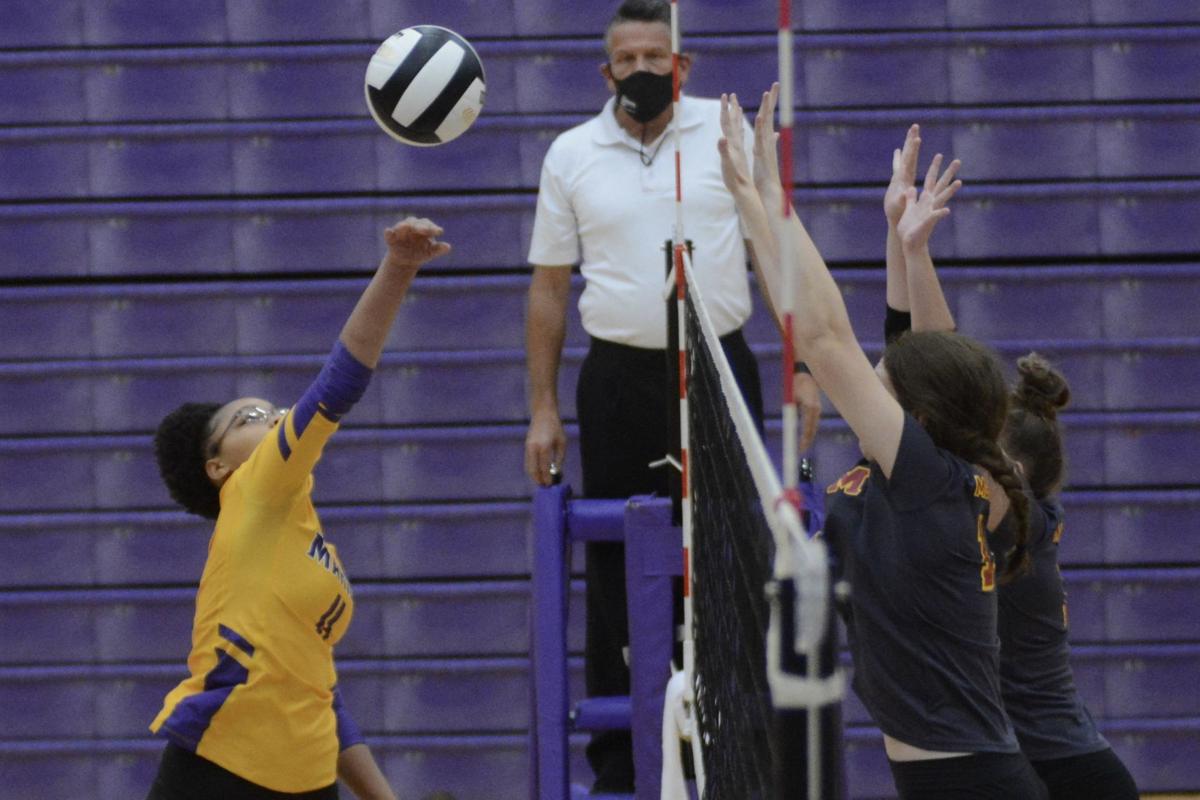 Marion’s Kamaria Bruton takes a swing against a block put up by McCutcheon in the Giants 3-0 loss to the No. 16 Mavericks in a Class 4A sectional 7 opening-round match Thursday in Bill Green Arena. 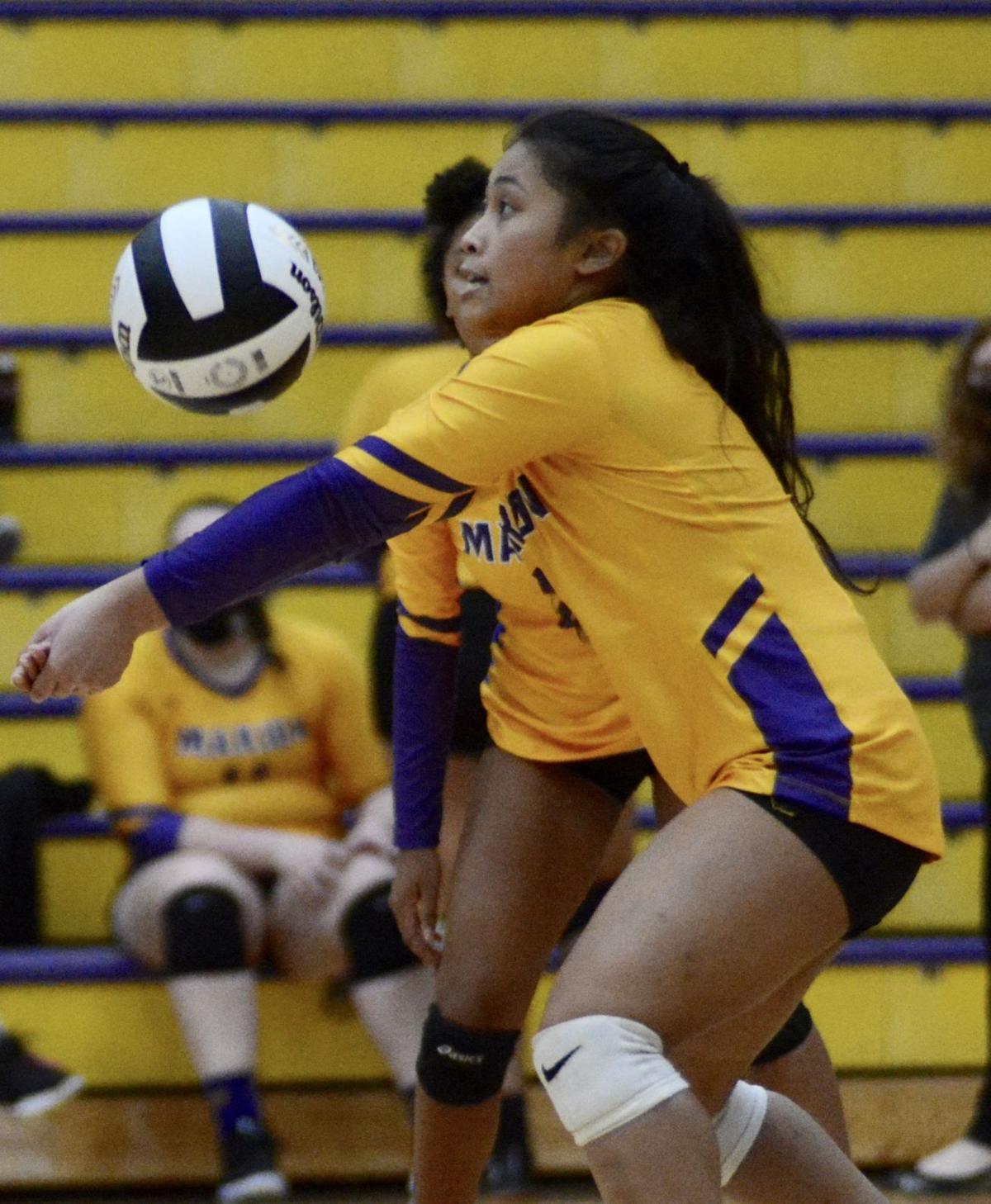 Marion’s Sophea Phuong makes a dig in the Giants’ 3-0 loss to No. 16 McCutcheon Thursday in the opening round of Class 4A sectional 7 in Bill Green Arena.

Marion’s Kamaria Bruton takes a swing against a block put up by McCutcheon in the Giants 3-0 loss to the No. 16 Mavericks in a Class 4A sectional 7 opening-round match Thursday in Bill Green Arena.

Marion’s Sophea Phuong makes a dig in the Giants’ 3-0 loss to No. 16 McCutcheon Thursday in the opening round of Class 4A sectional 7 in Bill Green Arena.

When it came to the pairings for Class 4A volleyball sectional 7, the Marion Giants most definitely drew the shortest straw.

The six-team, all-North Central Conference field featured just one ranked team, No. 16 McCutcheon, who finished off its fourth-straight NCC title on Saturday. The Mavericks finished league play unbeaten and only surrendered as many as 19 points in a set twice in sweeping all seven NCC opponents this season.

The young, much improved but overmatched Giants became sweep No. 8 for McCutcheon, who earned an efficient 25-7, 25-10, 25-9 victory in Bill Green Arena Thursday night.

The Giants did hustle, fight and scrap from beginning to end. They also played some good stretches of volleyball, but had few answers to combat an array of hitters and strong all-around play featured by McCutcheon.

The Mavericks put down 39 kills spread between nine girls and converted nearly 63 percent of their attacks. Sophomore Chloe Chicoine topped the team with eight and senior Sheridan Phillips added seven. McCutcheon also had 15 service aces and five blocks to account for 59 of their 75 points.

The Giants recorded six kills. Seniors Aylivia Mellon and Isabelle Bento, juniors Issy Leach and Kamaria Bruton along with sophomores Aniyah Rogers and Alyssa Lockwood had one kill apiece. Bento and Lockwood each had a block, and Rogers and Leach both served an ace.

“I told them in the locker room that despite the outcome, you guys need to be proud of the growth that we’ve has as a team,” Richards said. “It doesn’t necessarily show up in our record, but there are people that are noticing it in the community and that’s something to be proud of. I am proud of that.

Future Husker with Seth Malcom: Eight-man star does it all for Fremont-Mills

'Little things,' big impact: Huskers have to turn yardage into points against Wisconsin

“I feel like we’ve done some things,” she added. “That (match) was gonna be tough no matter what.”

The Giants finished the season 7-22 and will lose the services of Bento, Mellon and Persinger to graduation, meaning Richards will return eight of the 11 girls on the Giants sectional roster, most of whom got their first taste of varsity volleyball during the 2020 season.

Richards is encouraged by her team’s growth and its potential for more.

“I feel like in the moment we don’t see it but I’ve done a lot of reflecting in the last week and I have been really proud of them,” she said. “Aniyah has come a long way. She was only dressing varsity to start with to moving into full-time varsity role. She got thrown in there a couple times and really stepped up to that challenge.

“Kamaria hasn’t had a lot of varsity time but she worked really hard on JV,” Richards continued. “I have seen so much growth in her. I’m excited to see what she can put forth next year.”

Madison-Grant 3, Blackford 0The Argylls took the first step towards a sectional championship with a dominant 25-18, 25-4, 25-9 win over Central Indiana Conference-rival Blackford Thursday night at Taylor.

Madison-Grant (21-11) moves on to meet Eastbrook in the noon semifinal on Saturday. Tipton meets host Taylor at 10 a.m. in the first semifinal. The championship match is scheduled for 7 p.m.