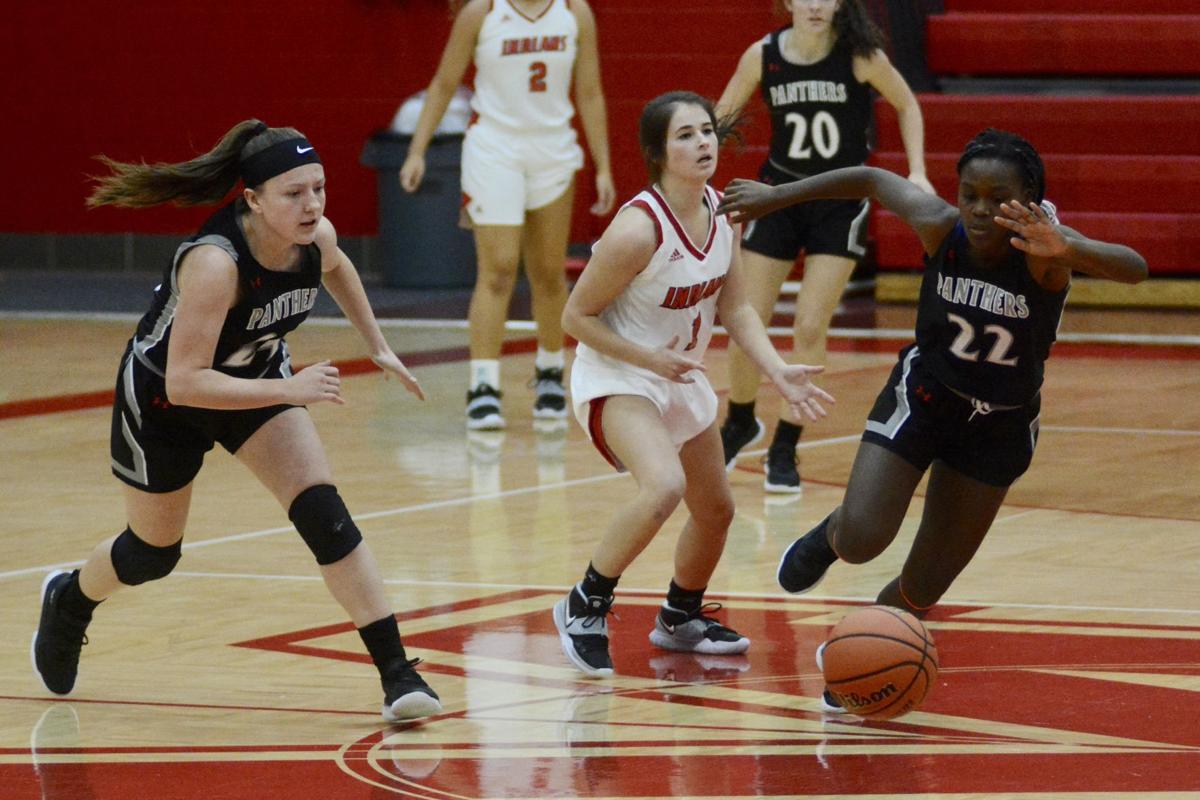 Eastbrook’s Johwen McKim (22) and Sophia Morrison chase a loose ball after it was knocked away from Mississinewa’s Katy Hosier in the first half of the Panthers’ 66-32 win Wednesday in Gas City. 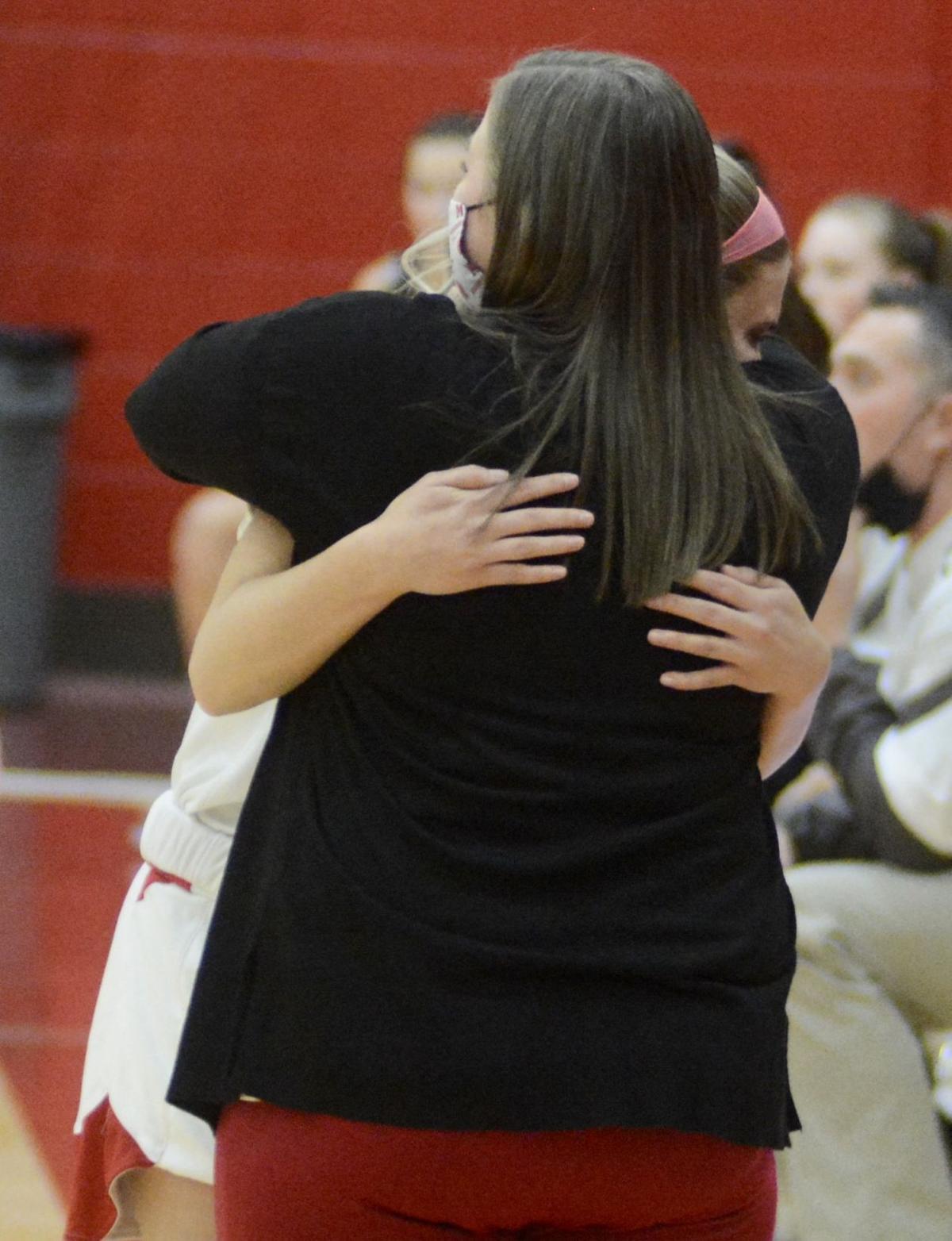 Mississinewa senior Darah Watson is embraced by Indians coach Laura Friday Wednesday night during the game with Eastbrook. Watson suffered a season-ending knee injury on Nov. 5, but suited up, started and scored the first two points of the game for Ole Miss on Senior Night.

Eastbrook’s Johwen McKim (22) and Sophia Morrison chase a loose ball after it was knocked away from Mississinewa’s Katy Hosier in the first half of the Panthers’ 66-32 win Wednesday in Gas City.

Mississinewa senior Darah Watson is embraced by Indians coach Laura Friday Wednesday night during the game with Eastbrook. Watson suffered a season-ending knee injury on Nov. 5, but suited up, started and scored the first two points of the game for Ole Miss on Senior Night.

GAS CITY — Coach Jeff Liddick issued a challenge to his Eastbrook girls basketball team between the first and second quarters Wednesday night at Mississinewa and the Panthers responded with perhaps their best eight-minute stretch of the season.

Eastbrook led 14-7 at the first-quarter break, then turned Liddick’s directive into action and gained total control en route to a 66-32 win over the Indians in the Central Indiana Conference opener for both teams.

“I didn’t feel like all five girls were working as a unit (defensively). We had three girls doing exactly what I wanted to do and the other two were just kind of there,” Liddick shared. “I said if all five of you will react and play with the intensity maybe two or three others are playing with, you’re going to go on a big run here.”

The Panthers held Ole Miss scoreless through the next eight minutes, forcing 10 turnovers and an 0-for-9 shooting performance. Eastbrook’s disruptive defense helped create a 19-0 run and 33-7 lead by halftime.

In fact, Eastbrook held Mississinewa scoreless for more than a 10-minute, 30-second stretch spanning the final 1:40 of the first quarter until junior Kate Ramey scored a bucket for the Indians nearly a minute into the third quarter to stop the Panthers’ run at 22-straight points.

Mississinewa made just 3-of-22 field goal attempts in the first half and 14-of-48 (29 percent) for the game, including 0-for-17 from 3-point range. The Indians also committed 25 turnovers.

“We just didn’t follow the game plan very well,” she added. “We knew that was the defense they were going to run. We practiced it all last week and the two days this week. We didn’t execute the game plan.”

Junior Mia Catey led the Indians with 11 points, 10 in the second half. She also collected a game-high 12 rebounds and had two blocked shots.

Mississinewa celebrated Senior Night on Wednesday and the most memorable moment of the game occurred in the first few seconds when Darah Watson scored the final two points of her high school career.

Watson suffered a season-ending knee injury near the end of the first quarter of the Indians’ opening game against Northfield on Nov. 5. She’ll soon have surgery to repair the injury, but Watson was introduced in the starting lineup and scored the first two points of the game for her team before walking off the court and sharing an emotional farewell embrace with Friday.

“When I came in she came in as a freshman. I’ve yelled at her countless times. She’s taken it and she’s grown as a person,” Friday continued. “She’s a great student now. Before she didn’t have the best grades but she’s completely done a 360. I’m so proud of that kid. My heart’s broken for her but I’m glad we were able to do that for her tonight.”

The Eagles topped the Panthers in a regional semifinal game in February on their way to finishing as state runner-up in 2020 and returned nearly all the key players from that tournament run.

Liddick said he’s watched some video on Frankton, but hasn’t done much in preparation, choosing to keep his girls’ focus squarely on Mississinewa. He said there’s not a lot of difference between this year’s Frankton team and the one Eastbrook faced twice last season.

“They returned a very experienced, very talented, very basketball savvy group,” Liddick said. “To go down there and play, that makes it that much tougher. I just challenged them in there, come in (Thursday’s practice) and let’s get ready to go play the No. 2 team in the state.

“If you can do the things you did tonight on Friday, you’re going to give yourselves a chance to win,” he continued. “They’re excited about it. I’m excited about it. Hopefully we go down there and give a great effort.”