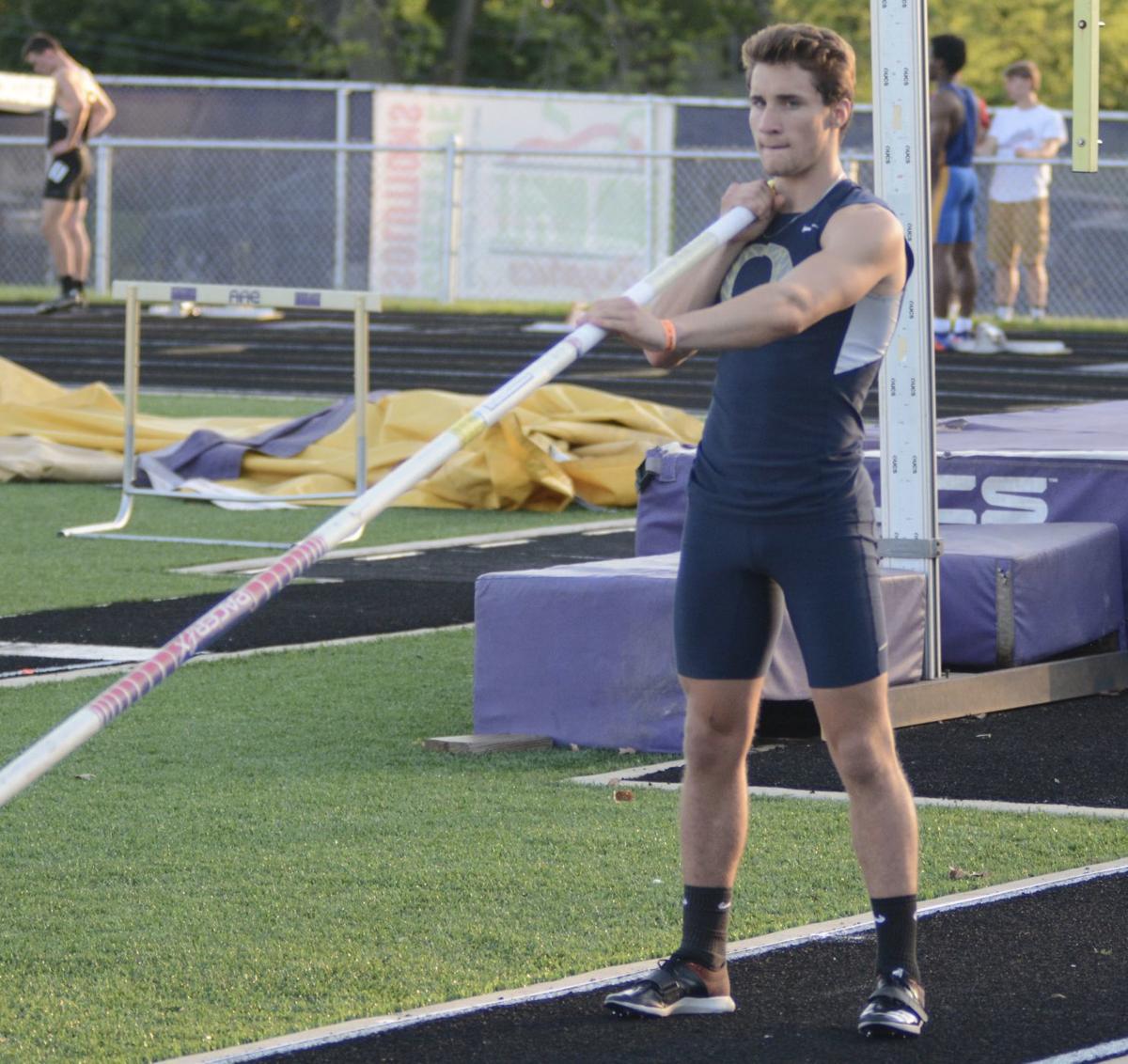 Gavin Holz was one of 12 seniors on Oak Hill’s boys track team. Holz was a two-time state qualifier in pole vault and will continue his career at Indiana State. 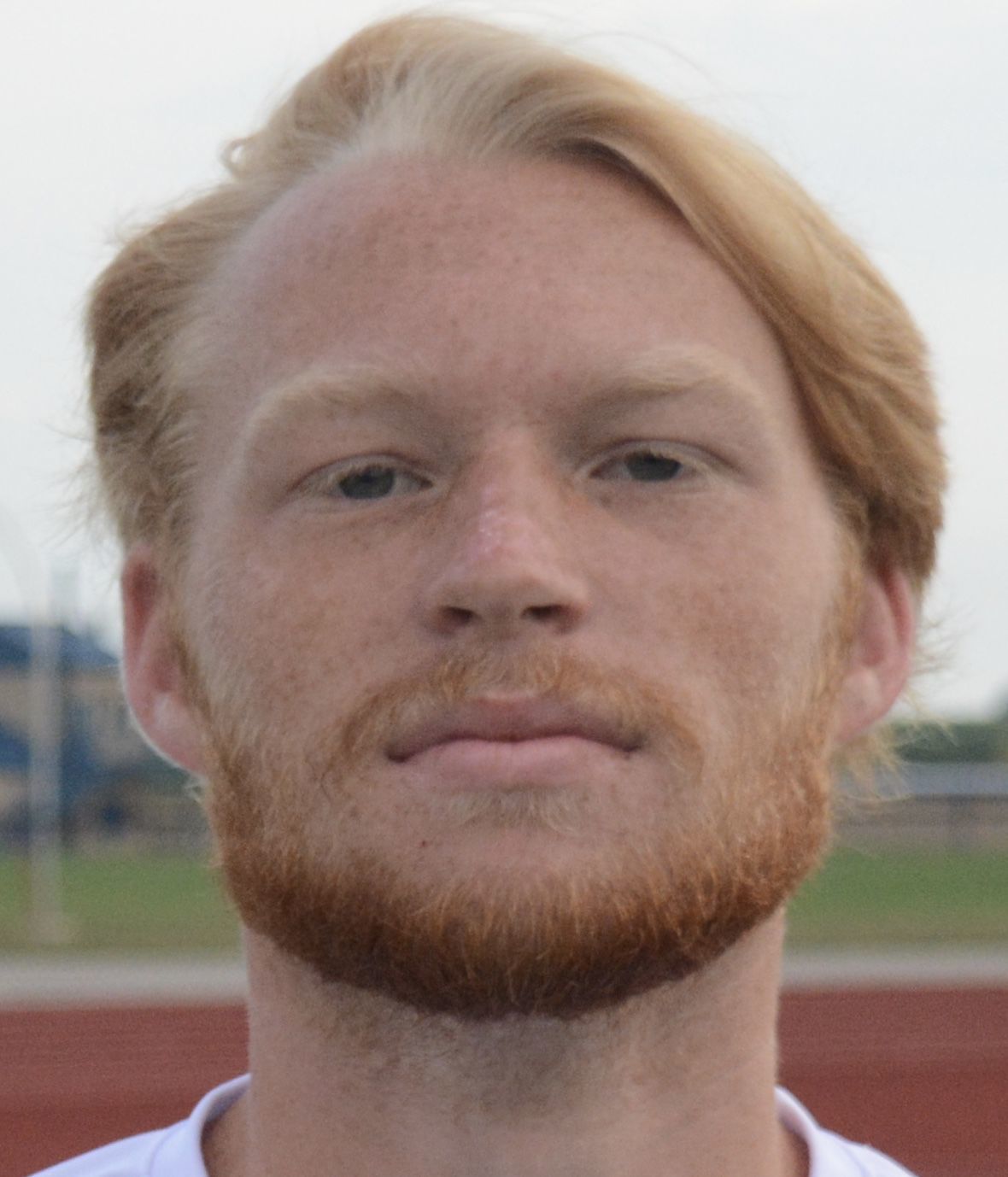 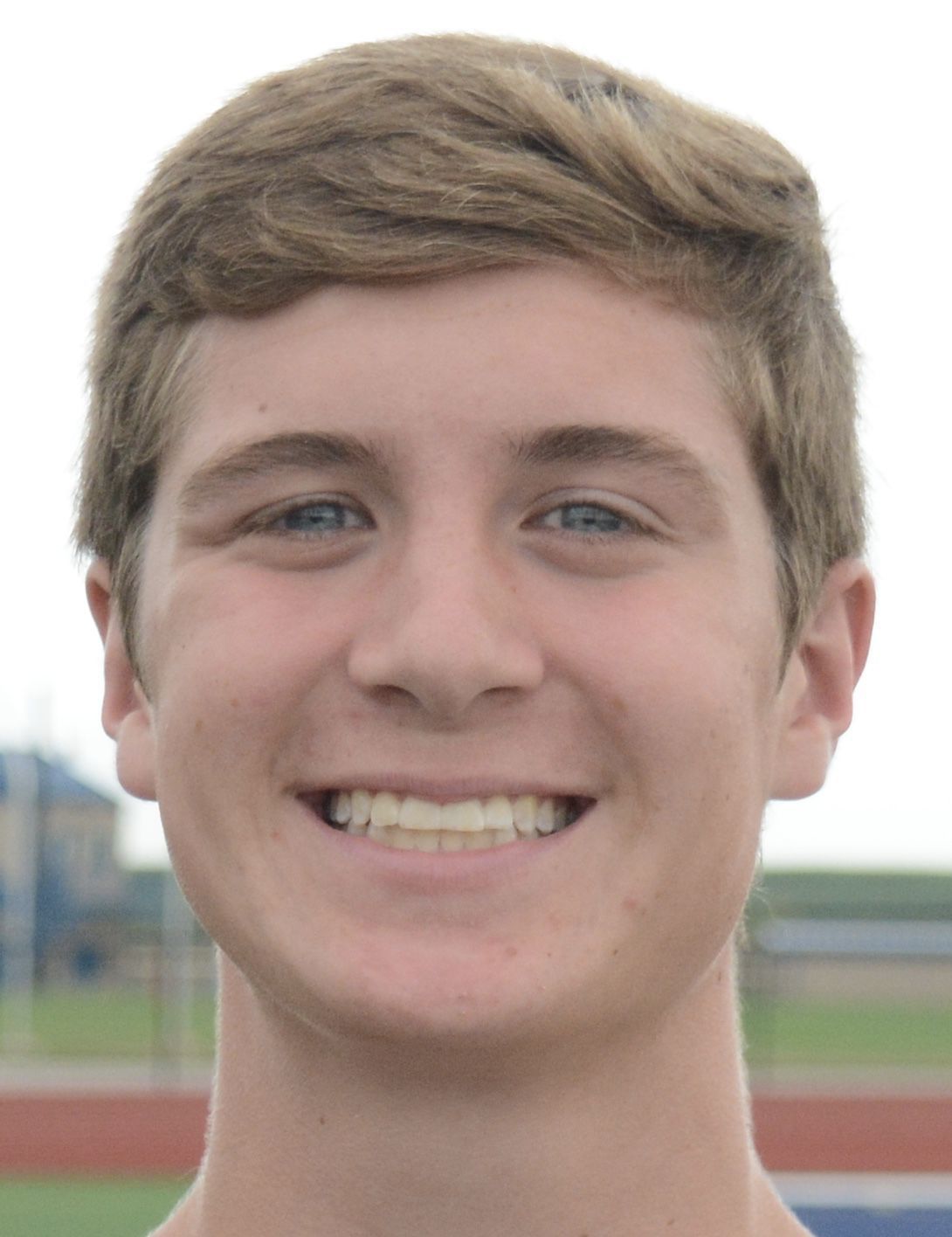 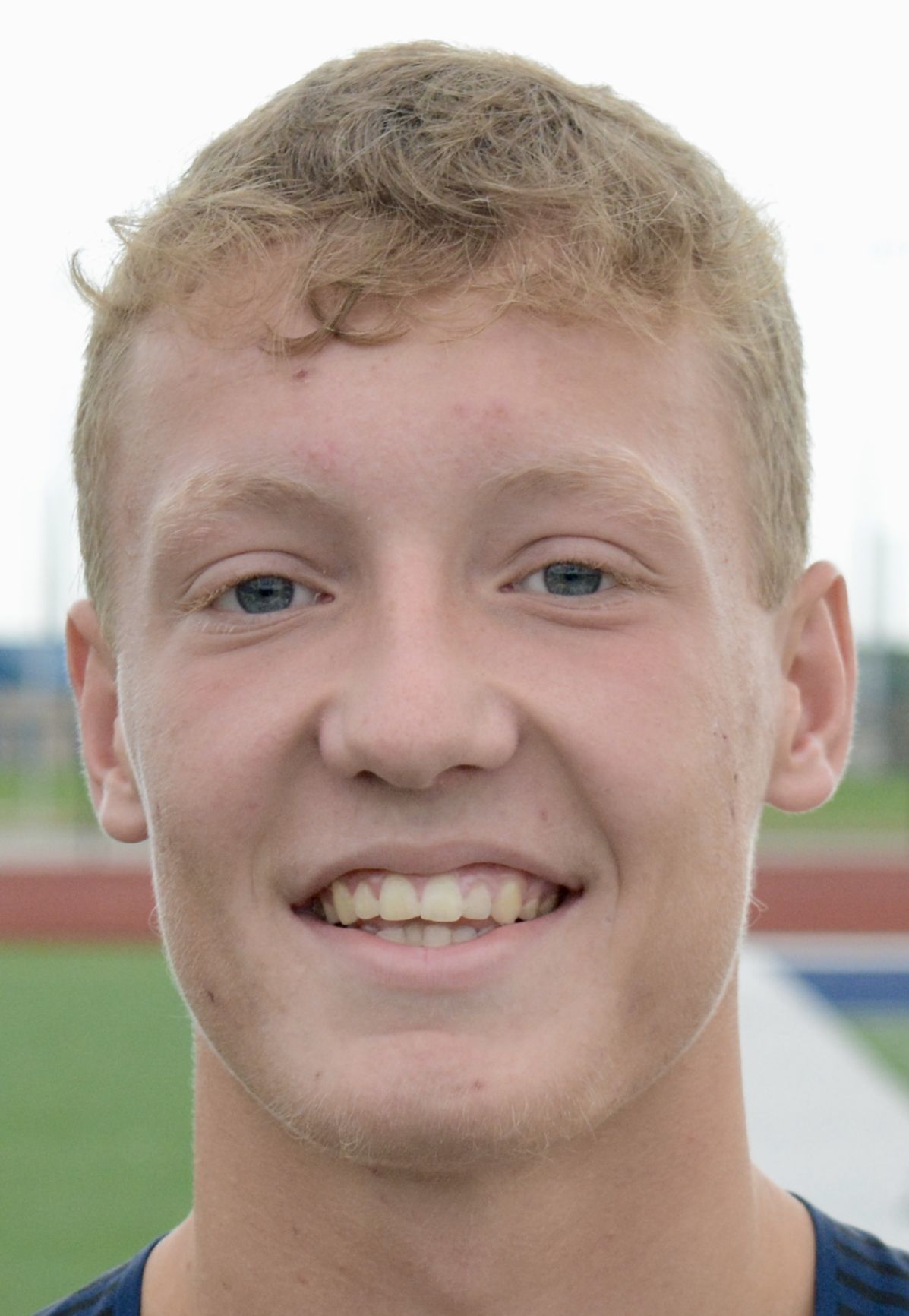 Oak Hill boys track coach Paige Brunner said there are still moments of disbelief that his then 2A school-sized team won the single-class Marion Regional just over a year ago.

He spent some time on Tuesday sitting in the press box at IWU’s track and field complex, where the boys regional would have been contested on Thursday, and reflected on that night and his class of 2020 seniors. Some who had important roles in the accomplishment.

“We took such a kind of care-free or throw-caution-into-the-wind approach to that meet last year,” Brunner said. “I told somebody the other day, if that meet lasted three hours, you know 180 minutes, 177 of it we had no idea we even had a chance to win that meet. It was the perfect set up.

“The Carrolls and Homesteads were off a little bit and we were as perfect as we could be,” he continued. “Our studs were perfect and our kids that were just happy to be at the regional pinned their ears back and stole points for us. A lot of those kids were seniors this year.”

Pole vaulter Gavin Holz, was one athlete Brunner thought could win his event. Holz came out of nowhere and earned a trip to state as a sophomore then entered the 2019 Marion Regional with much higher expectations.

Holz exceeded those expectations, set a school record with a vault of 15-feet and finished runner-up to Churubusco junior Sam Wood (15-4), who defended his 2018 regional title.

“He has come the furthest and the fastest in the quickest amount of time of any athlete I’ve ever had,” Brunner said.

Holz entered the 2019 state finals as owner of one of the top-5 vaults in the state all season, but met the same fate when he failed to clear an opening height of his own and coach’s choice.

“Last year he still exceeded expectations of where we thought he might end up in that quick of a time frame,” Brunner said, noting Holz’s spring practice start-up was often delayed until after Oak Hill’s spring break. “You’re talking about an event that you have to be technique specific and you don’t have a lot of time. For him to go from 11-6 to 15 feet in pretty much a calendar year is just astonishing. It doesn’t happen. He deserved better last year.”

“We let him down, didn’t communicate well enough with him on my end to get him into an opening height where he needed to be,” he added. “You get down there and it’s rushed. … At the state meet its very much boom, boom, boom once you’re up. … Pressure builds and he’s still new enough to the event (it’s difficult) to make those quick adjustments. We weren’t able to get the information to him.”

Still, Holz was impressive enough earn his way to an opportunity to vault at NCAA Division I, Indiana State.

“He still just needs more experience. I think Indiana State got a steal in Gavin because he’s got so low mileage in the event,” Brunner said. “You get him to a college where he can pole vault year round, I think the sky is going to be the limit.”

Gabe Overmyer and Ryan Fernandes have been kind of hidden in the shadows of multi-year state qualifiers Sammy Sommers, who graduated last year and now competes for Taylor, along with senior classmate Tahj Johnson.

Overmyer pulled a stunning performance in the 110 hurdles to aide the Eagles regional win. He was fifth in sectional and needed a call back just to get the opportunity to compete. Overmyer then ran the ninth-fastest time in the regional qualifying heats to sneak into the finals, where he raced to fifth and scored four ultra-valuable points. Oak Hill won the title by one-point over Carroll.

“A kid like Gabe and another senior like Ryan Fernandes, those are guys that have been vital to our success,” Brunner said. “They have been so important to our depth and our success by just stockpiling points.

“Gabe’s a kid that this year indoors ran the second fastest 60 (meter) hurdle in school history (Sommers, the 2019 indoor state champ holds the record),” Brunner said. “He is as unheralded and unknown of a hurdler as we’ve had in our program. ... This winter he bought in and had been out every day we’ve had since December. … I know Gabe had the goal to be the top hurdler in the county and conference and competing for a sectional title.”

Fernandes kept fast company as a sprinter for Oak Hill, lurking and waiting for opportunity behind Johnson, Sommers and Jon Holz, a 2019 graduate who won both the 100 and 200 meter races in the 2017 sectional.

Holz missed most of last year with an injury and it gave Fernandes some limited opportunities. Even so, Fernandes still earned a chance to compete next year at IU-Kokomo.

“He reached out to me and in essence was asking ‘am I good enough to run in college? Kind of blown away by it,” Brunner said. “As a coach you have to take that step back and explain to him, you have been completely covered up by arguably three of the best sprinters we’ve had in program history. … Ryan stepped in for (Holz) and helped us win those team championships.

“He was on the 4x(100 relay team) with Gavin, Sammy and Bradey Evans that set the Grant Four record last year, Brunner added. “Guys like Gabe and Ryan, I was really looking forward to them being showcased. They deserved and earned that opportunity after kind of being point-stealers for years.”

Luke Allgood-Hartman stood to make an impact in both the 110 and 300 hurdles as well as in the pole vault. Like Overmyer and Fernandes, Allgood-Hartman found few chances to contribute for the the past two seasons and had the opportunity taken away this spring.

“He was motivated for a big season because he really wanted to compete in college. He’s talented enough to do that but really hadn’t had the opportunity to showcase his talents,” Brunner said. “Luke would have definitely been thrown into the forefront and been a major contributor this year. “

“We look really good based on Sammy and Tahj, kids like that. But you win based off kids like Gabe and Ryan and Luke who score you 2 or 3 points in a couple of events,” he added. “... they are the reason you win championships.”

Oak Hill’s distance crew was set for another solid season as well, with seniors Macallister Cheek and Dillon Mitchell leading the way.

Brunner said Cheek and Mitchell had been kind of “polar opposites” during their cross country and track careers for the Eagles, but each has contributed to a lot of success on the courses and tracks around central Indiana.

“Mac has been a kid that every year has gradually gotten better and better and better through hard work and Mac knows he has to do that,” Brunner said of Cheek. “Mac is talented, don’t get me wrong, but lacked in that natural, raw ability just to fall on the track and be fast. He was able to figure out last track season, I’ve got to do more.

“He started to have a really good year for us, ran some of the fastest miles and two miles we’ve had in the last five to 10 years,” he added. “He got to regional in the 2 mile, got his butt kicked, but I think that motivated him for cross country and he had a huge fall for us.”

Cheek and Mitchell took turns being Oak Hill’s top cross country runner last fall, but Brunner thought Mitchell might be more of a middle distance guy in the spring.

Cheek signed to compete at Grace College beginning this fall, but Brunner wasn’t yet sure if Mitchell would decide to compete in college.

“He 100 percent has the talent to compete at the next level. He has to find the right program for Dillon and has to have the right mindset,” Brunner said. “There are definitely programs he could compete and have an impact right away, but that’s a decision Dillon will have to make.

“Both of those guys have been huge parts of success we’ve had in cross country and track,” he added. “I’m fortunate that I got to coach them in the fall and they got to win a county, conference and sectional championship then got to semistate. They had great senior years for us.”

Between his boys and girls teams, Brunner has seven athletes signed to compete at the next level and that’s going to be one of the lasting memories he has from the Class of 2020.

“It’s no wonder we won the meets that we did,” Brunner reflected. “If you have one kid going on (to college) from a school our size to compete ... I would be thrilled. To have seven kids, it could be more by the time the summer is over, you realize how special they were, how talented they were.

“...What we had last year, winning our regional, that was the last track meet for a lot of these guys,” he added. “That’s a good way to go. Little did we know at the time. There’s a reason things happen like that and I’m glad that it did.”