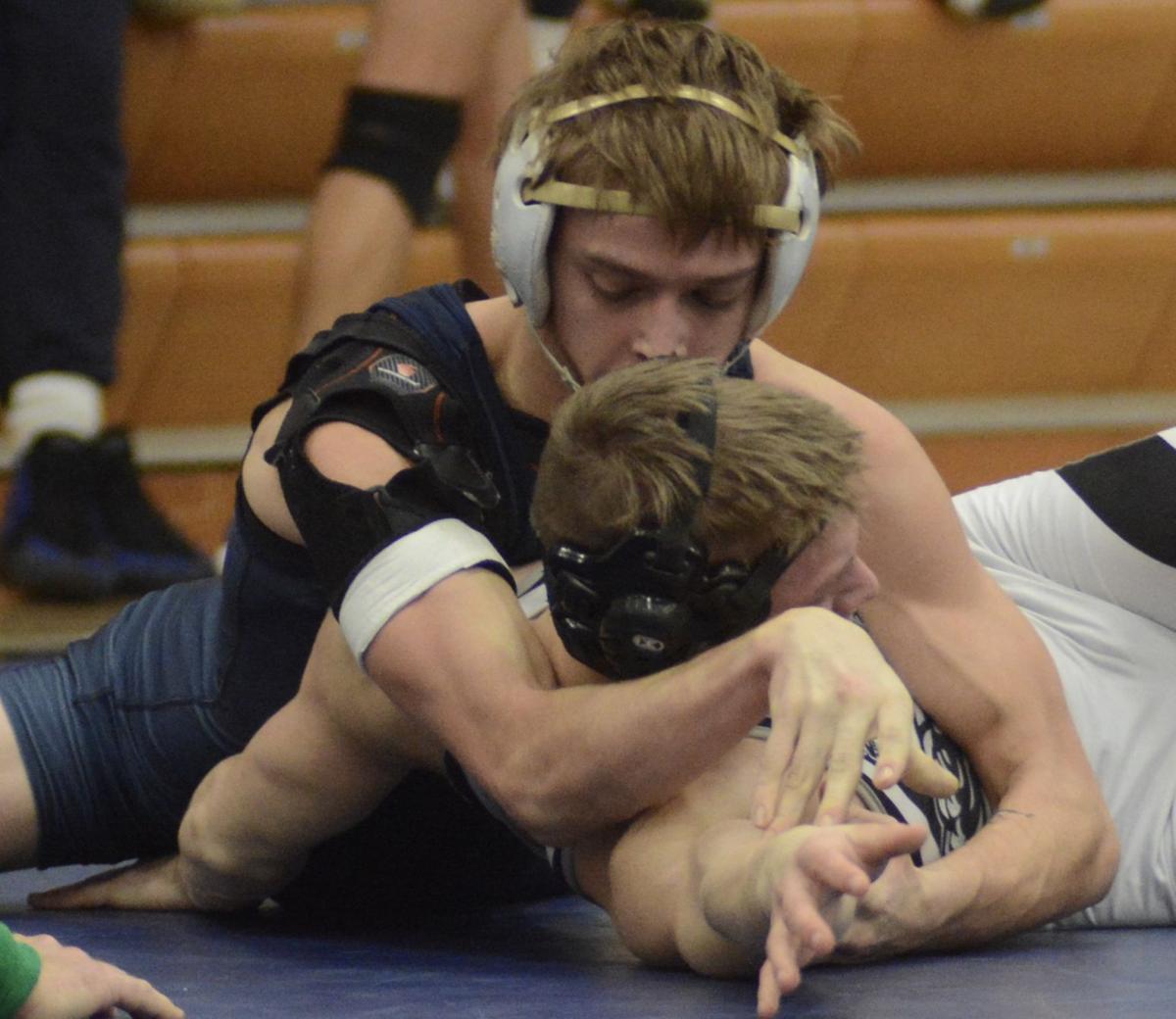 Oak Hill’s Harper Dedman works to put the finishing touches on a pin against Western in the 126-pound championship match at the Oak Hill Sectional on Saturday. 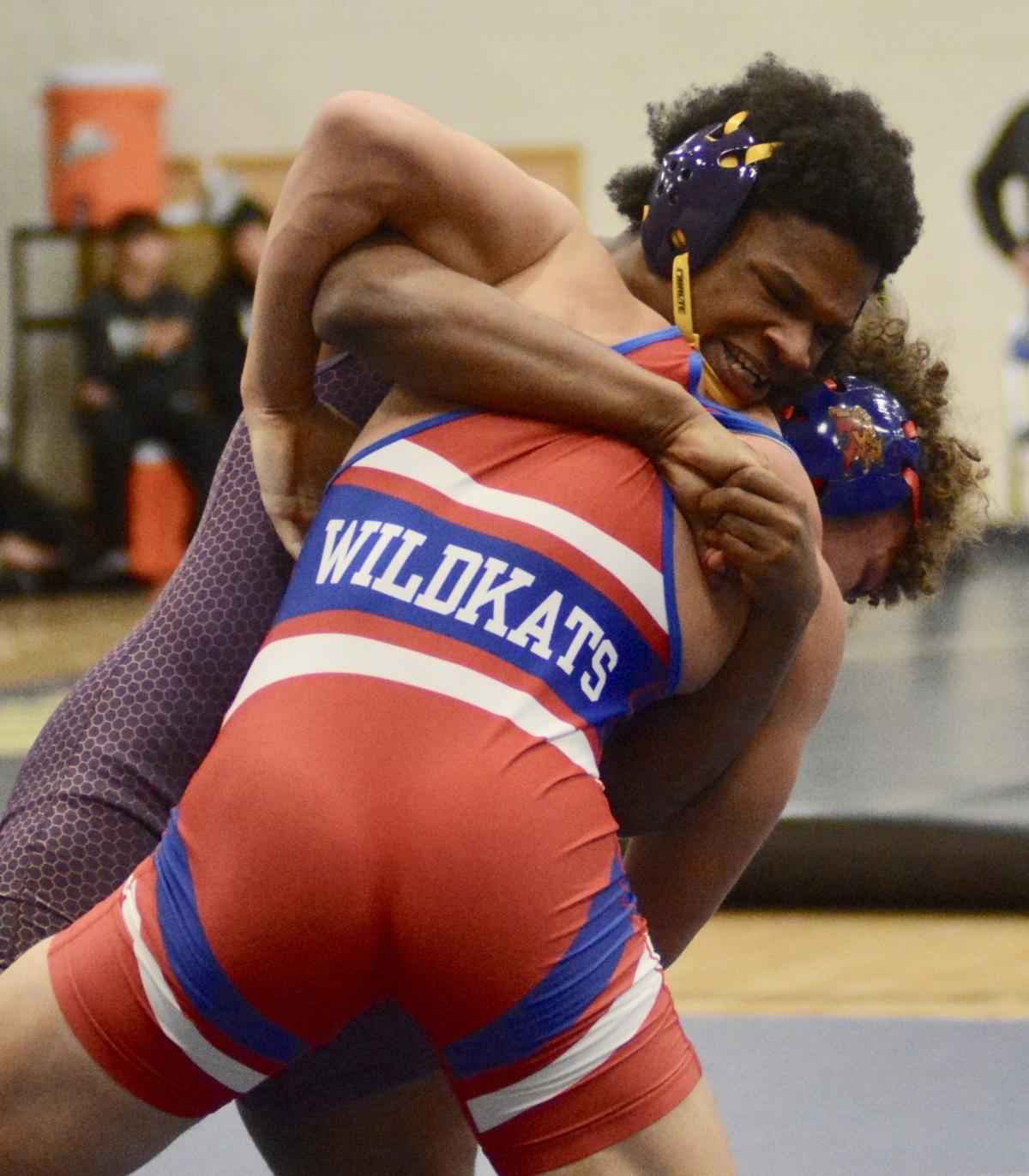 Marion's Levi Lee works to gain control of his Kokomo opponent in the 195-pound championship match at the Oak Hill Sectional on Saturday.

Oak Hill’s Harper Dedman works to put the finishing touches on a pin against Western in the 126-pound championship match at the Oak Hill Sectional on Saturday.

Marion's Levi Lee works to gain control of his Kokomo opponent in the 195-pound championship match at the Oak Hill Sectional on Saturday.

Depth and determination proved to be the deciding factors in the Oak Hill wrestling sectional team championship on Saturday.

As has become tradition, the Oak Hill and Western started battling for the top spot in the team standings early in the day and the outcome wasn’t decided until late into the placement rounds.

“We are absolutely thrilled to be sectional champs,” said Oak Hill coach Andrew King, who helped deliver the 29th sectional title in program history. “We knew Western was going to be nipping all the way. For most of the time we were nipping at their heels more than they were nipping at ours.

“We had a couple of No. 1 seeds that got upset early and we tried to tell our kids you can’t shut down. You can’t stop,” he continued. “Because if you wrestle on through and win back with pins to get third place, even though you’re not in the finals, it scores points. They did that. We knew Western was going to keep going strong and they did. We were fortunate to have more depth.”

The Panthers held a slim lead when the championship, third- and fifth-place matches started and ultimately claimed the titles in six of the 14 weight classes, along with a pair of runner-ups and three fourth-place finishers.

Oak Hill won sectional championships with a trio of its standouts: seniors Harper Dedman (126) and Aidan Hardcastle (152) each made quick work of their opponents en route to winning the fourth-consecutive sectional titles of their decorated careers.

Junior Brody Arthur (138) was equally impressive, earning pins in the first round of each of his four matches to claim his weight-class crown.

The difference in depth, and the team championship, came in Oak Hill earning five, third-place finishes and one fourth giving the Eagles and even dozen wrestlers moving in Saturday’s Maconaquah Regional.

The fourth, sophomore Wyatt Strange, was next to take mat in a match against Western’s MJ Norman at 195. The rest of the Golden Eagles gathered near the corner of the mat and watched intently as the two locked in a closely contested battle. When the final seconds ticked away in Strange’s, 7-3 win, it provided Oak Hill with the lead for good and gave the team a moment of pause to celebrate.

Senior Kasey Smith then won his 220 third-place match to give Oak Hill some separation. Senior Tyler Miller finished fourth at 145 to advance to regional.

“There were some young ones that did well. Strange came through,” King said. “It came down to that (match) because it was against Western. What points we got were great, but Western gets them if we don’t so its a double edged sword and they knew it.

“Western had to win that match. We might have been able to sneak it out with Smith and Peer winning,” he added. “At that time you don’t know if Smith and Peer or going to win, so at that time it was the final nail in the coffin. That sewed it up for us.”

Oak Hill and its trio of champions weren’t the only sectional champions from Grant County schools and four of the five county schools advanced wrestlers to the regional round.

Marion senior Levi Lee pinned Kokomo’s Chad Washburn in the championship match at 195 to win a sectional championship for the Giants.

Seniors Je’Kwan Williams (182) and Greg Johnson (285) finished runner-up for the Giants while junior Nic Elliott (126) and senior Kainen Malone-Johnson both finished third to earn a trip to the regional.

“I expected a little more than that, I expected about seven, possibly eight (wrestlers to go to regional),” said Marion coach Lonnie Johnson. “There were some ups and some downs. Overall, I’m not totally happy but I’ve got something to work with.”

Coach Johnson was particularly pleased with Greg Johnson, who giving up significant weight to and was pinned by Western’s unbeaten heavyweight, Braydon Erb in the second period of the finals.

“(Erb is) ranked number one in the state and Greg wrestled him tough,” Coach Johnson said. “Greg got pinned, but I have no complaints. That kids is tough and he was giving up a lot of weight. He had him off balance a couple of times and he fought.”

Mississinewa will send a trio of sophomores to the Peru Regional with Brody Hurd, who finished third at 106 while Jordan Coulter (138) and Tanner Campbell (160) each wrestled to fourth-place finishes.

“I was hoping for six through and got three through, all three sophomores, which is awesome,” said Ole Miss coach Pat Pearson. “With us being the the young team we are, I’m happy with getting anyone through.”

Eastbrook freshman Olliie Turner was the lone Panther to earn a regional trip. He finished third at 120. The Panthers also got a fifth-place finish from sophomore Damon Nuckols at 132 and a sixth by freshman Hayden Garrett at 106.

The Maconaquah Regional is set for 9:30 a.m. on Saturday and can be viewed for $9.95 at track wrestling.com.