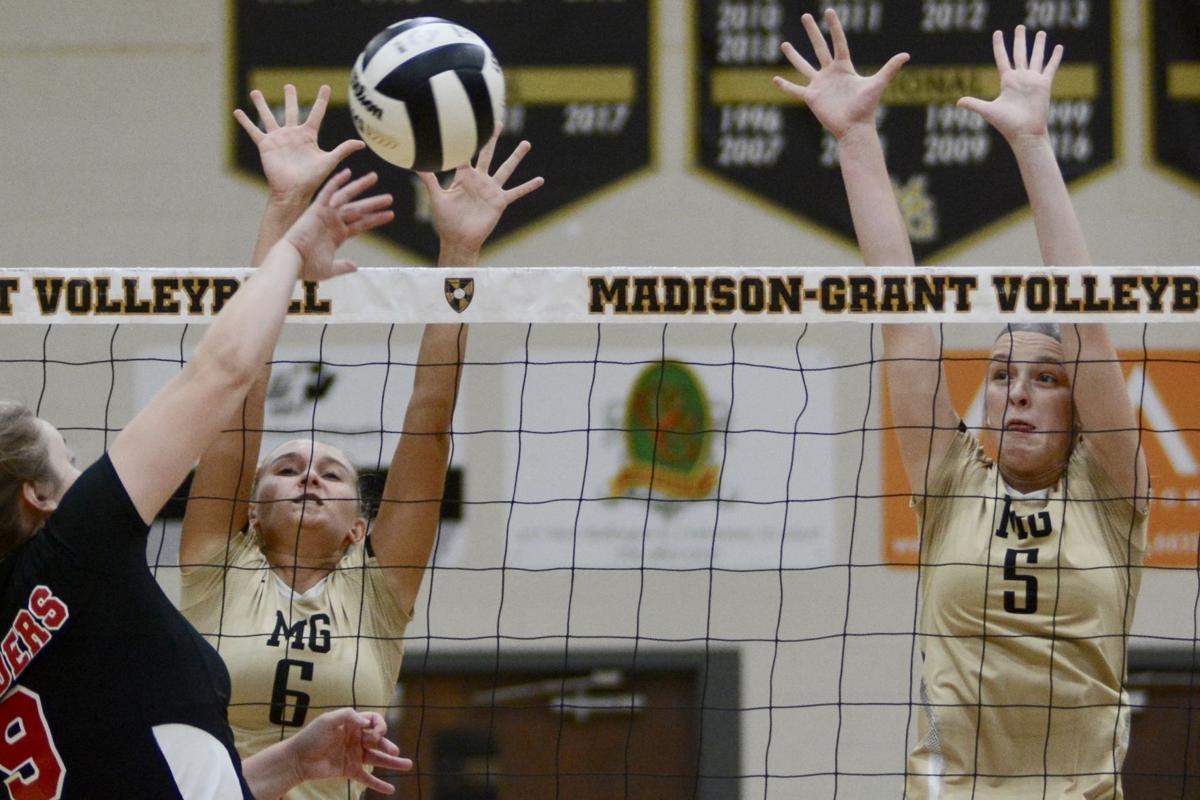 Madison-Grant's Emma Brummet (6) and Azmae Turner put up a block in the Argylls' 3-2 loss to Class 2A No. 1 Wapahani Wednesday night in Fairmount. 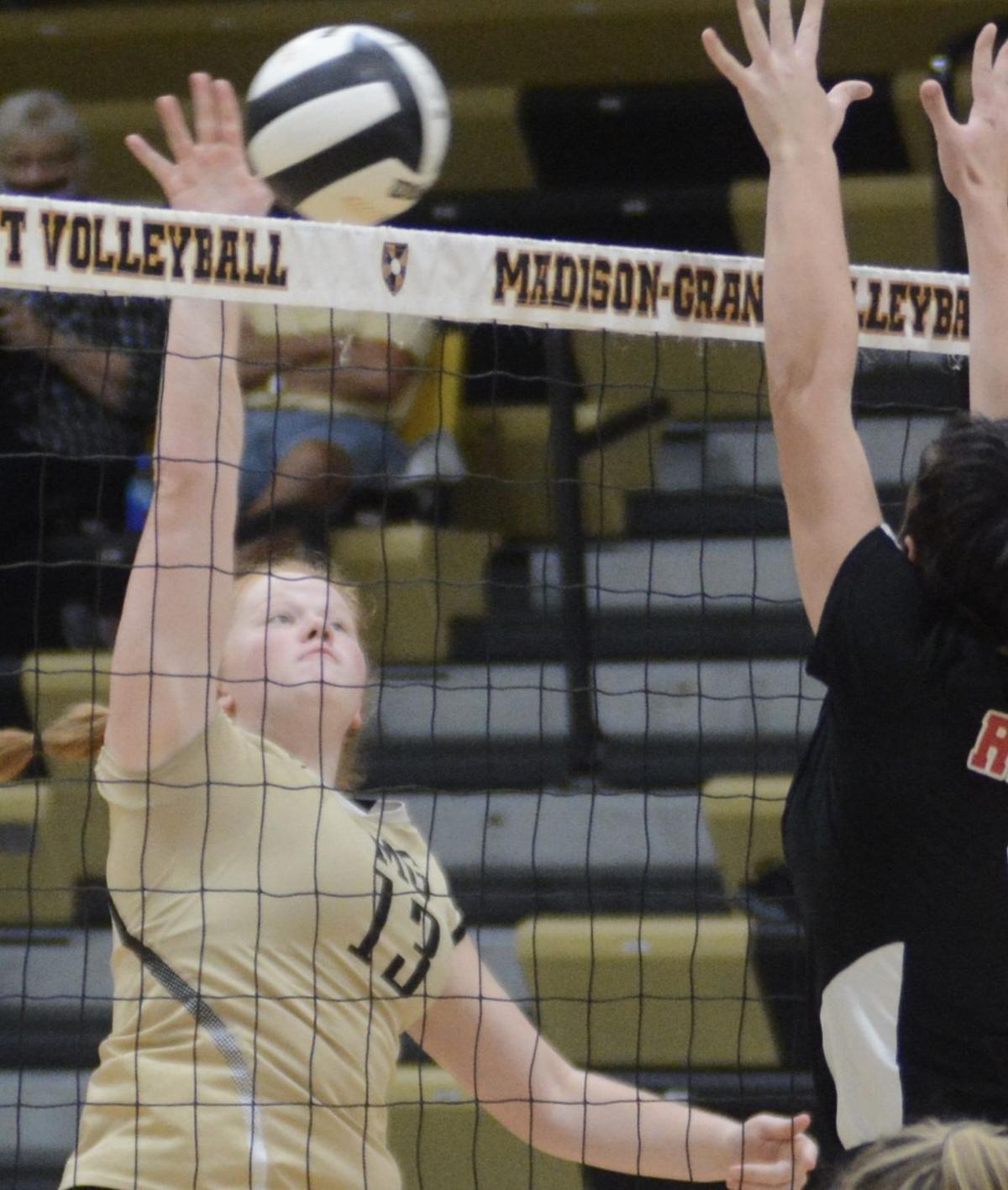 Madison-Grant's Katie Garringer takes a swing at a kill in the Argylls' 3-2 loss to Class 2A No. 1 Wapahani Wednesday. 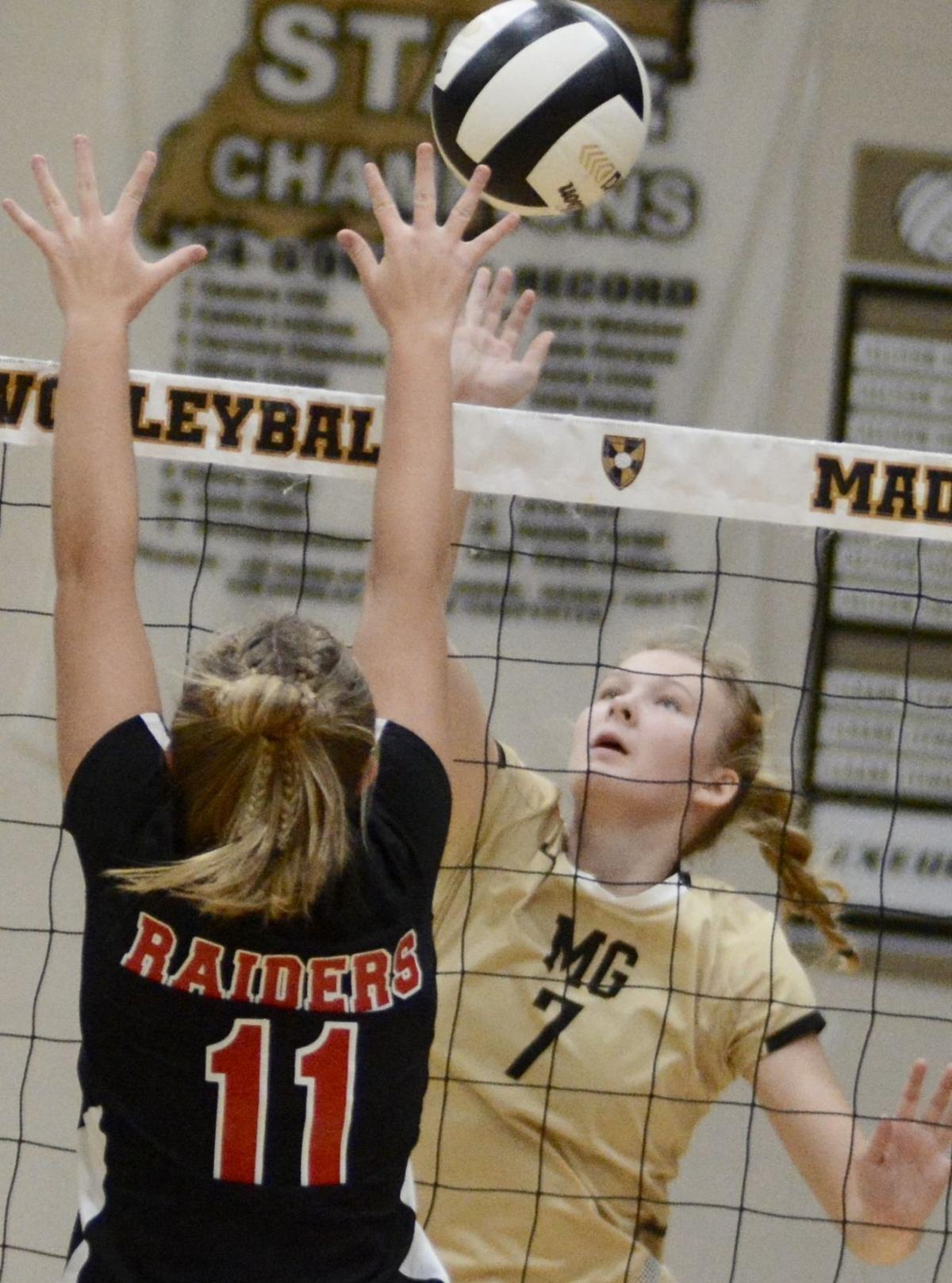 Madison-Grant's Grace Holmberg attempts a spike against Wapahani Wednesday in Fairmount. The Argylls lost a tough 3-2 decision to the Class 2A No. 1 Raiders.

Madison-Grant's Emma Brummet (6) and Azmae Turner put up a block in the Argylls' 3-2 loss to Class 2A No. 1 Wapahani Wednesday night in Fairmount.

Madison-Grant's Katie Garringer takes a swing at a kill in the Argylls' 3-2 loss to Class 2A No. 1 Wapahani Wednesday.

Madison-Grant's Grace Holmberg attempts a spike against Wapahani Wednesday in Fairmount. The Argylls lost a tough 3-2 decision to the Class 2A No. 1 Raiders.

FAIRMOUNT — When it arrived at Madison-Grant Wednesday night, the Class 2A top-ranked volleyball team from Wapahani had lost just four sets all season.

Three of those came in a sweep at the hands of Class 4A No. 1 Yorktown, the Raiders only loss in 11 matches.

However, waiting on Wapahani was an Argyll team growing in confidence and ready to rumble after its runner-up finish in the Madison County tournament on Saturday.

Momentum was a shared commodity, each team controlling play in splitting the first four sets. But it was Wapahani who grabbed it last with a four-point run to take a 10-6 lead in the fifth.

The Argylls closed back within two twice, the final time at 12-10, before Wapahani scored the final three points to escape with the 3-2 win.

“We played really well in our first two matches on Saturday (wins over Lapel and Alexandria) and I think that gave us confidence going into this one,” said Argyll coach Kayla Jump. “We were really relaxed against Oak Hill (on Tuesday) and I was a little disappointed, but maybe they were saving it up for tonight. I have a lot of optimistic thoughts about our next few matches.”

Jump said she thought the Argylls seemed relaxed before taking the court on Tuesday, maybe a little bit too relaxed for the coach’s liking given the caliber of competition.

“Usually when we play better we’re a little bit more fired up,” Jump said. “We were a little relaxed and I’m like ‘Do you know who we’re playing?’”

Jump said she made some adjustments between the first and second sets, and the Argylls responded,

“We just came out on fire,” Jump said. “I guess they listened.”

Wapahani scored the first point, but on the strength of a pair of blocks by Azmae Turner and Katie Garringer’s serve, M-G scored the next five points to take a lead it wouldn’t relinquish.

The Raiders fought back to a tie at 14 before Emma Brummet’s ace sparked 6-1 run that ended with an emphatic kill by Garringer and a 20-15, M-G advantage. Garringer also put down kills on the final two points of the Argylls’ 25-18 win.

The Argylls led from first serve to finish in the fourth set, growing leads of 15-6 and 19-9, then finishing with a convincing, 25-14 win.

The teams exchanged three-point runs early in the fifth set and the Raiders held a 5-4 lead after theirs. The set was tied at 5-5 and 6-6 before Wapahani pulled away to close out the match.

“They decided to hit different shots than they normally do to make (Wapahani) earn points,” Jump said of what most pleased her about the match. “We struggle with that. I thought after the first set we decided to do that and I was really proud of them for listening, changing our game plan and rolling with our new game plan.”

Madison-Grant (10-7) had its match with Blackford on Thursday postponed so the Argylls will next compete in the Frankfort Invitational on Saturday.

The Argylls will then turn their attention to pursuing a Central Indiana Conference championship. M-G is off to a 2-0 start in CIC play and hosts Mississinewa on Tuesday.

A rematch with Wapahani could take place in the Elwood Regional a little over a month from now, but Jump said the Argylls have work to do before that happens.