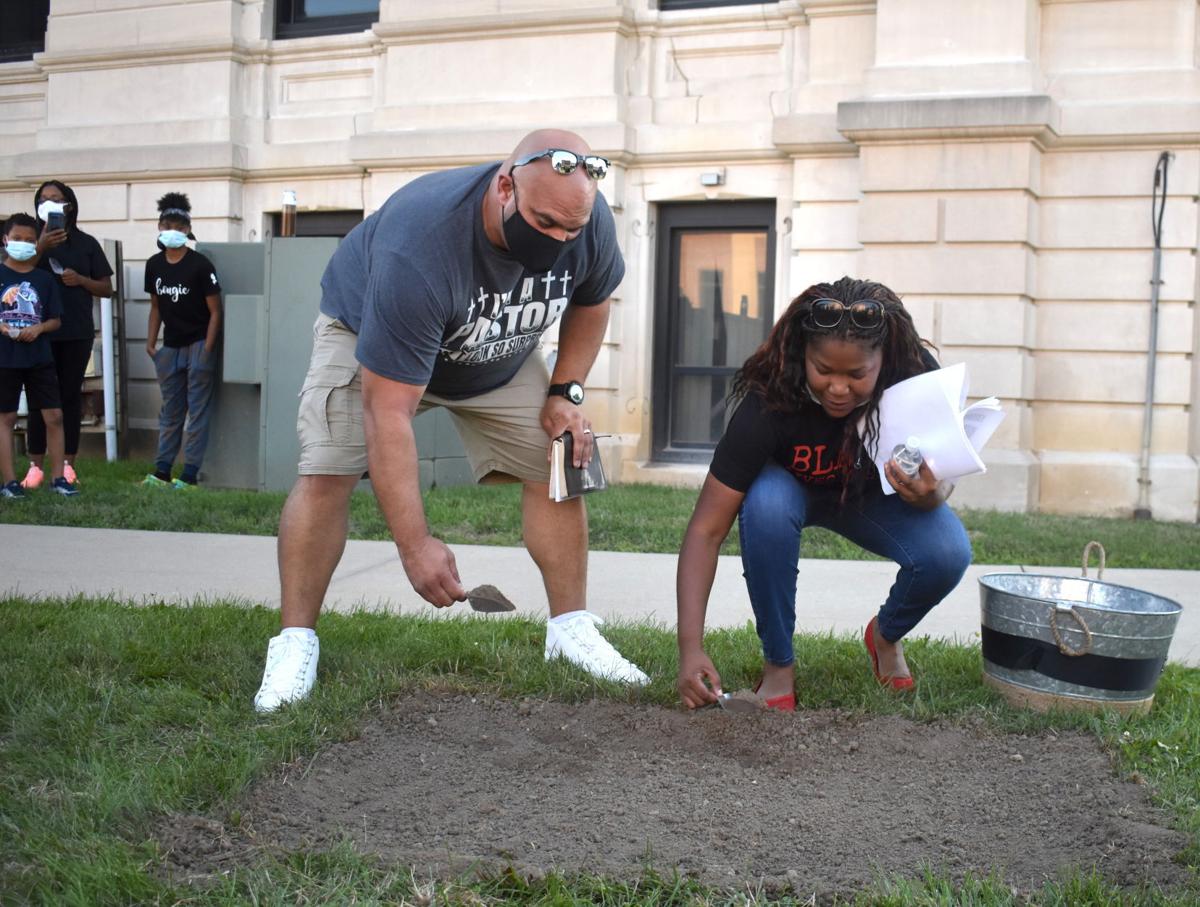 Andrew Morrell, left, and Torri Williams collect soil from the location of the 1930 lynchings of Thomas Shipp and Abraham Smith on the 90th anniversary of the lynchings. 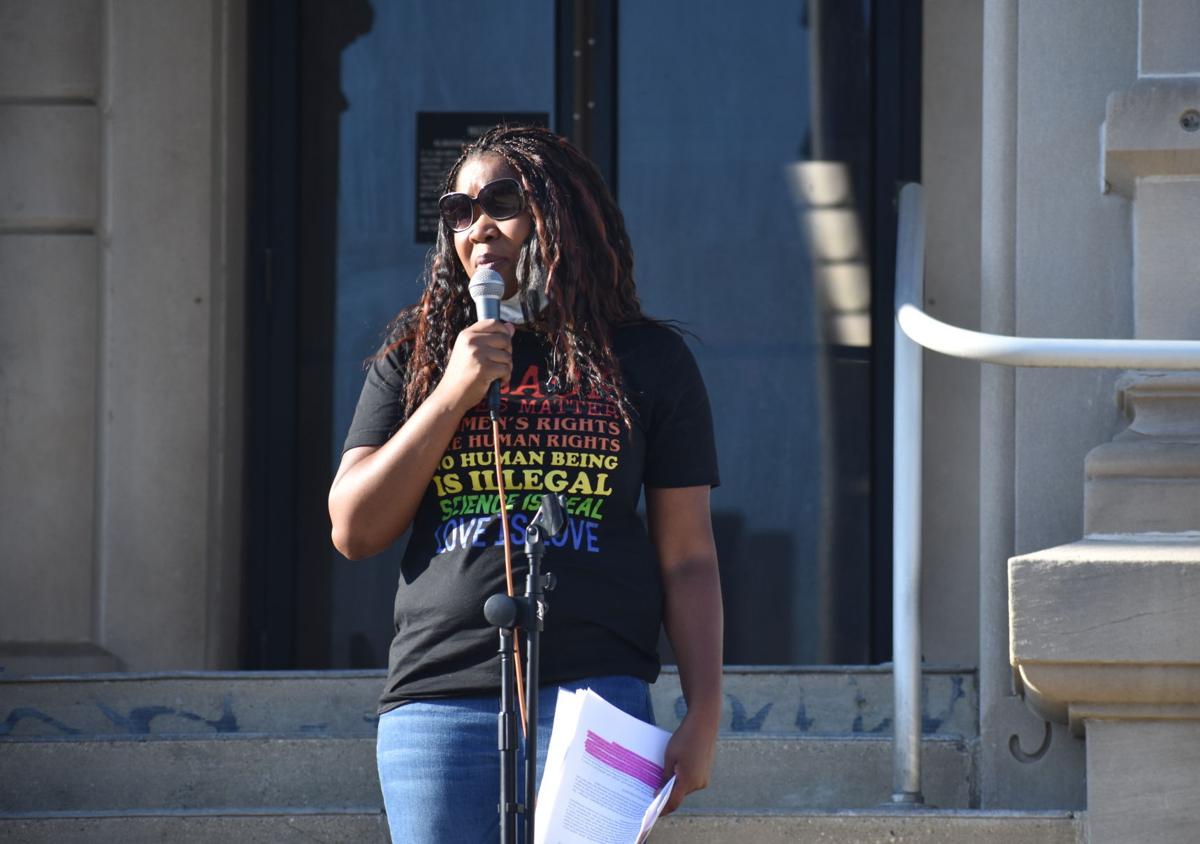 Andrew Morrell, left, and Torri Williams collect soil from the location of the 1930 lynchings of Thomas Shipp and Abraham Smith on the 90th anniversary of the lynchings.

“I want to get the dirt,” Marion resident and justice advocate Torri Williams said.

The dirt was from the site of Indiana’s last lynching of two young Black men, and Williams was determined to claim possession.

Williams had been seeking out the possession of this memoriam from the county for a while and just recently received permission to gather the soil on behalf of the Equal Justice Initiative’s National Memorial for Peace and Justice in Montgomery, Alabama. The soil was collected on the 90th anniversary of the lynchings, and Williams is committed to continue to have an impact on Grant County.

Her determination to release the county of its stigma tied back to the lynchings reflects the campaign slogan “Moving Marion Forward” that she ran with during her race for city council in 2019. Williams lost the election by 22 votes and may not be on the council now, but she continues to pour herself into the political scene and community. She said she longs to see Marion be a place known for racial reconciliation, unity and wholeness.

For Williams, passion always accompanies action. This summer on June 6, she led one of the largest marches in Grant County for racial justice and said she saw the community transform toward unity as unlikely people spoke out and young citizens’ voices were amplified all in the name of justice.

While the march was a success, Williams said she was not complacent with her efforts and utilized her now prominent platform to encourage the community’s engagement in making a difference for all lives. A community care initiative resulted in providing meals for local families, boxes to schools and donating $350 worth of food to a local food pantry.

In addition, one of the donors felt inspired to provide internet access to 15 Marion Community Schools students who did not have internet access, a more pressing need during the pandemic and at-home schooling. Williams said the march was one of her most proud moments in 2020 so far, and many lives of Marion residents were changed for the better as a result.

Williams said she did not put herself on the frontlines of the march because she felt obligated, but rather to fight against the injustices she and others have experienced firsthand.

Indiana’s presidential power in terms of voting in the middle

Breonna Taylor juror: There should have been more charges

Every Supreme Court justice of the past 50 years

She recalled that a friendship was abruptly shattered when the ears of young Williams heard the words, “Black girls don’t make good best friends.” This assumption stigmatized on Williams by her childhood friend’s mother only empowered her to become involved in the fight for wholeness, she said.

Something she would do anyway has now blossomed into a platform that transcends the stagnant towards action-oriented advocacy, she said.

Her drive is fueled by her family, whom she loves and fights for each day. Williams’ husband is by her side in her efforts, both encouraging and challenging her for the most effective voice possible. Together, they are a voice for justice and reconciliation. They are parents to twin boys, who Williams said are their family’s future, America’s future and the reason she does what she does.

“The next generation gets it,” Williams said.

Inspiring the younger generation to become involved in important conversations of the time by reminding them how important their voice is also motivates her work. She encouraged young adults to not settle and be disgusted with politics, but rather to lead and take the next step to run for office.

Williams’ approach to championing a voice of unity would not be complete without her values that shape her passion for change. What is most relevant right now, according to Williams, is that we remember to see the humanity in other people and see God in everyone. Despite how easy it is to get caught up in outrage, she said it is important to take a step back and appreciate differences, while in the same light moving towards unity.

In that light, the soil that once represented death could perhaps be repurposed for nurturing new life.