You are the owner of this article.
Edit Article Add New Article
You have permission to edit this article.
Edit
Home
News
Sports
Opinion
Obituaries
Classifieds
Jobs
Archives
e-Edition
Contact Us
Share This
1 of 7 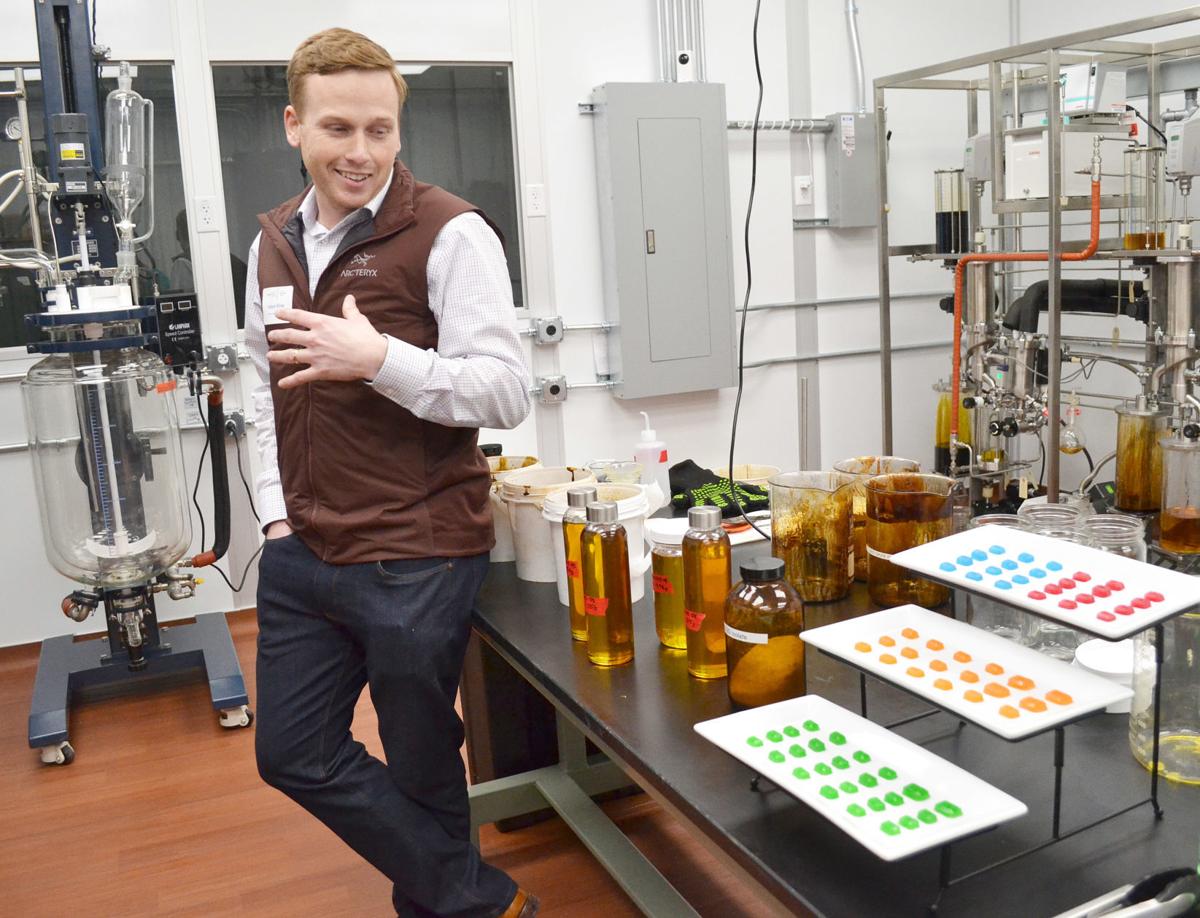 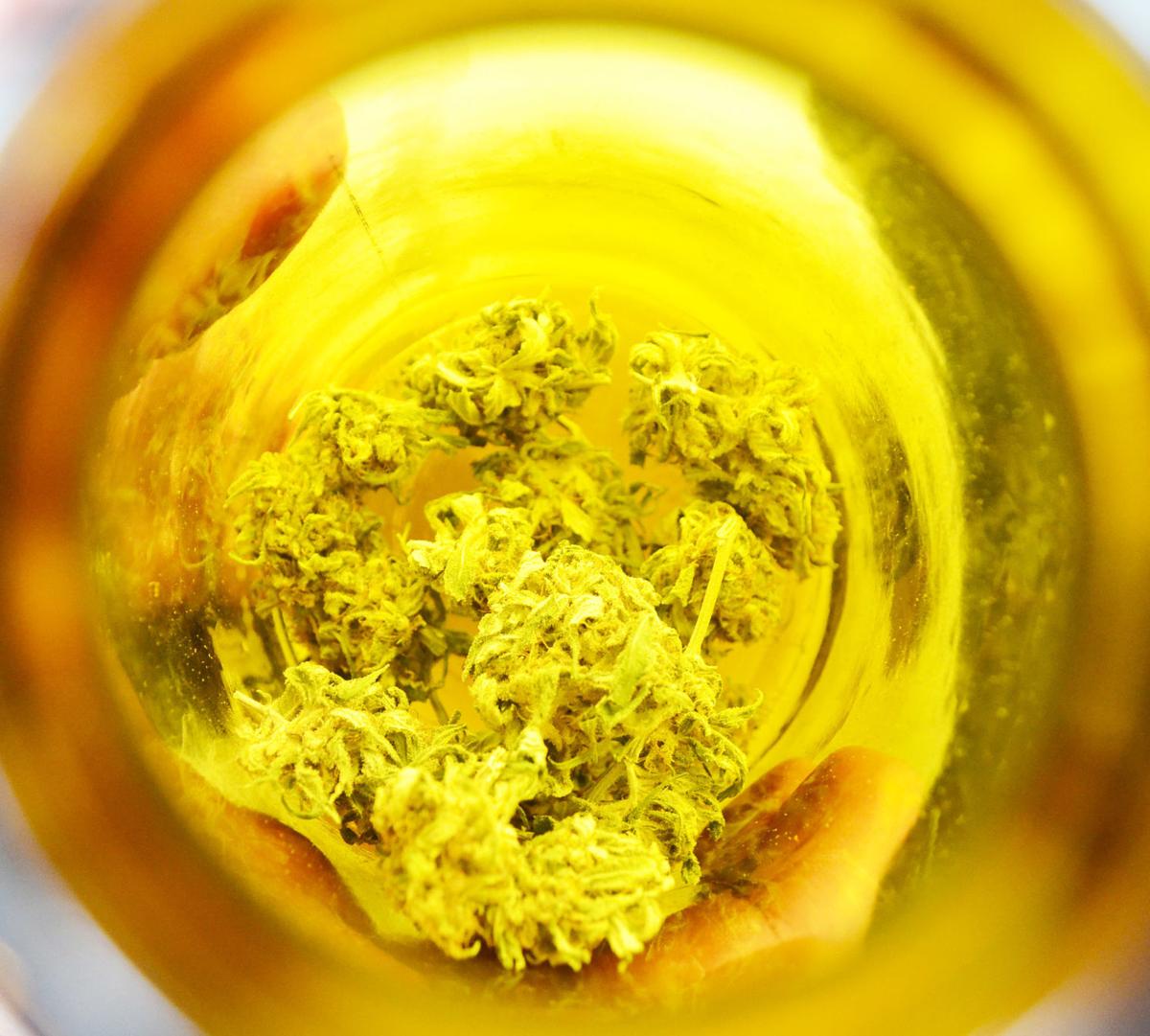 A look inside a bottle of raw hemp buds. These buds are the starting point for CBD products made at the Heartland Harvest plant. 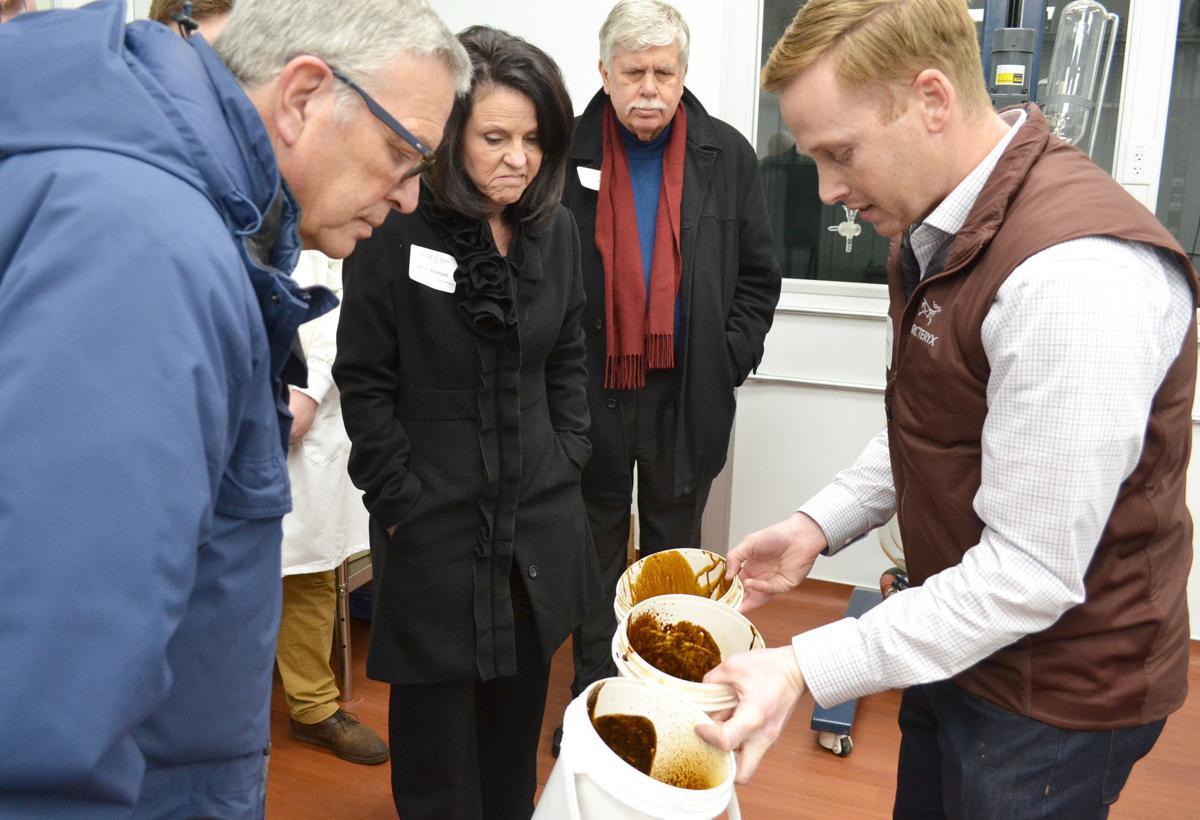 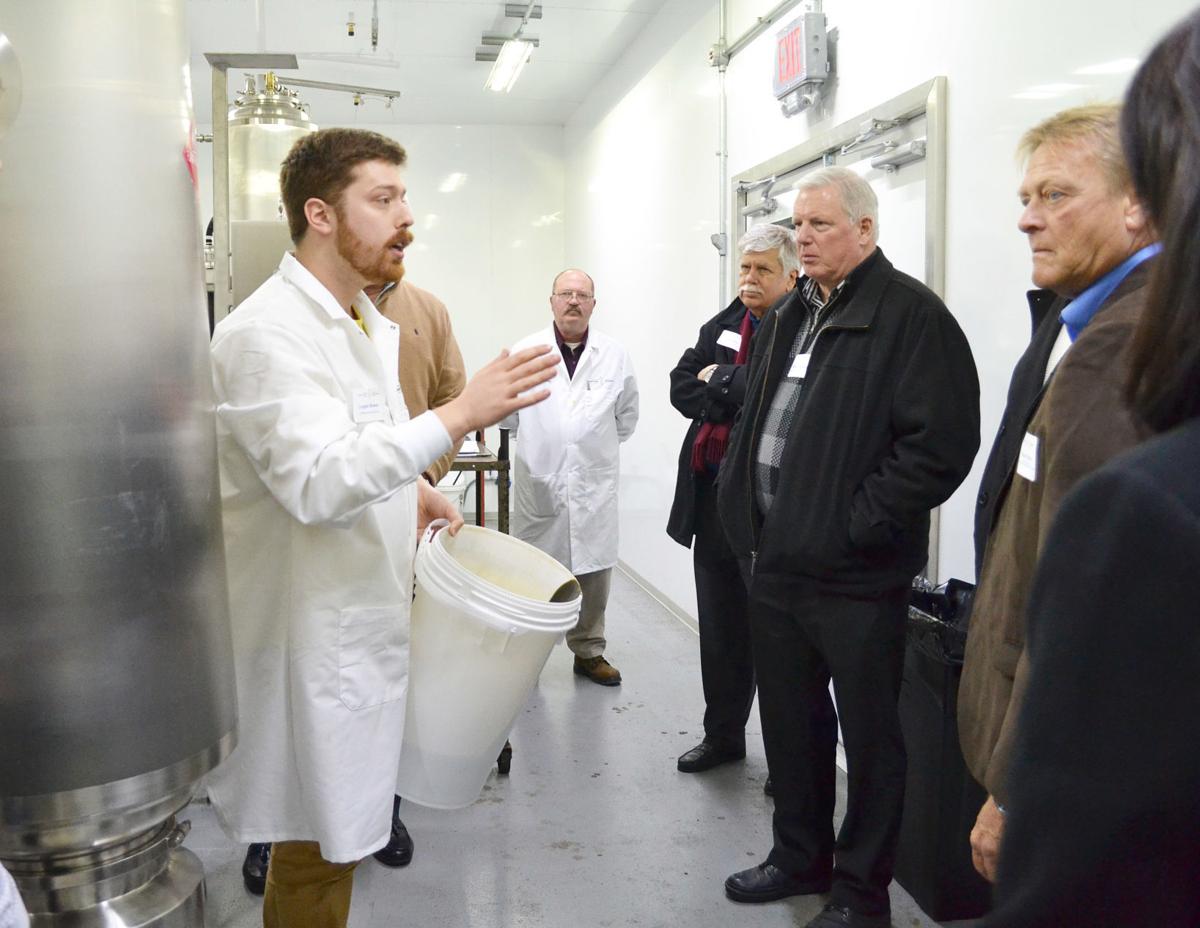 Logan Baker shows a sludge-like crude hemp product to the tour group and explains the process of turning hemp buds into the substance. 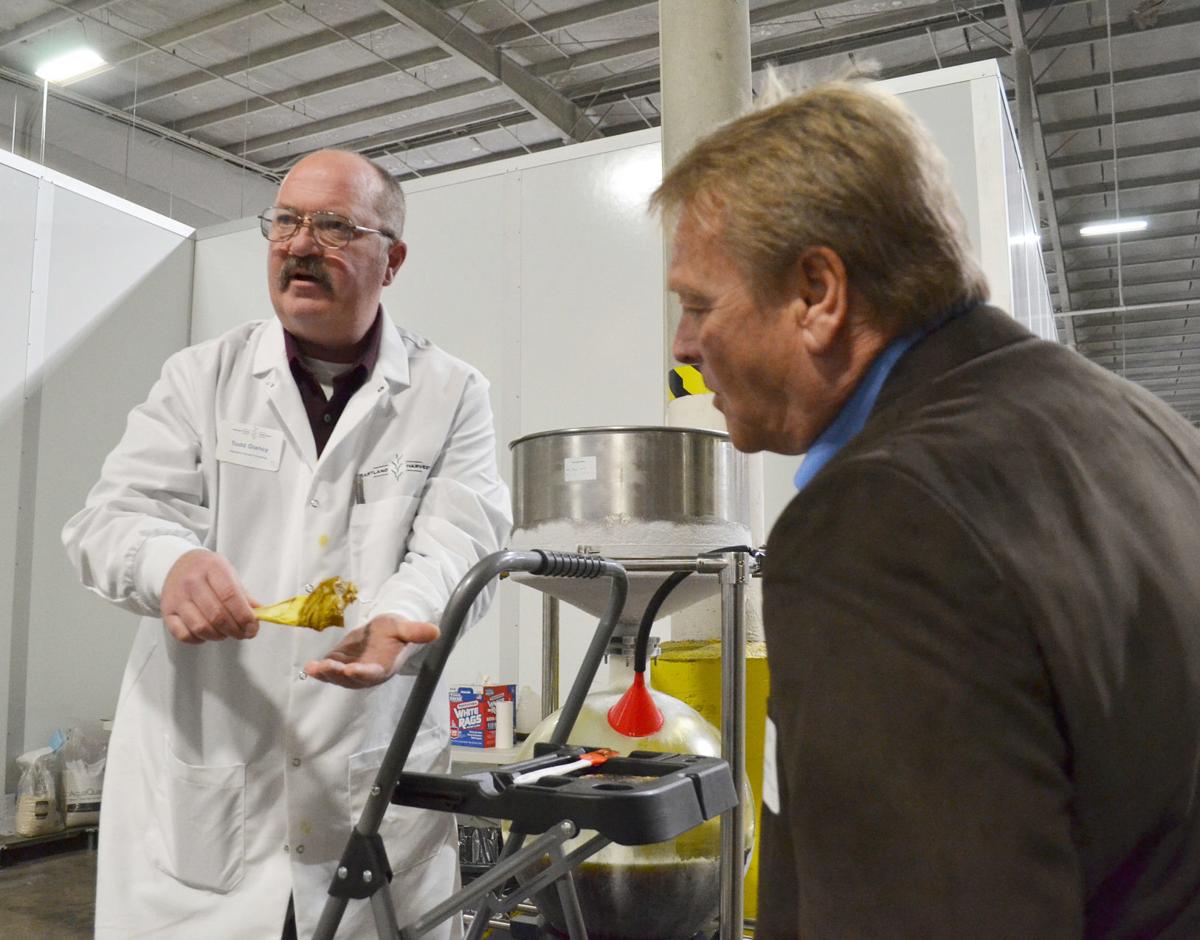 Todd Glancy holds up a spoonful of hemp lipids as Gas City Mayor Bill Rock leans in for a closer look. 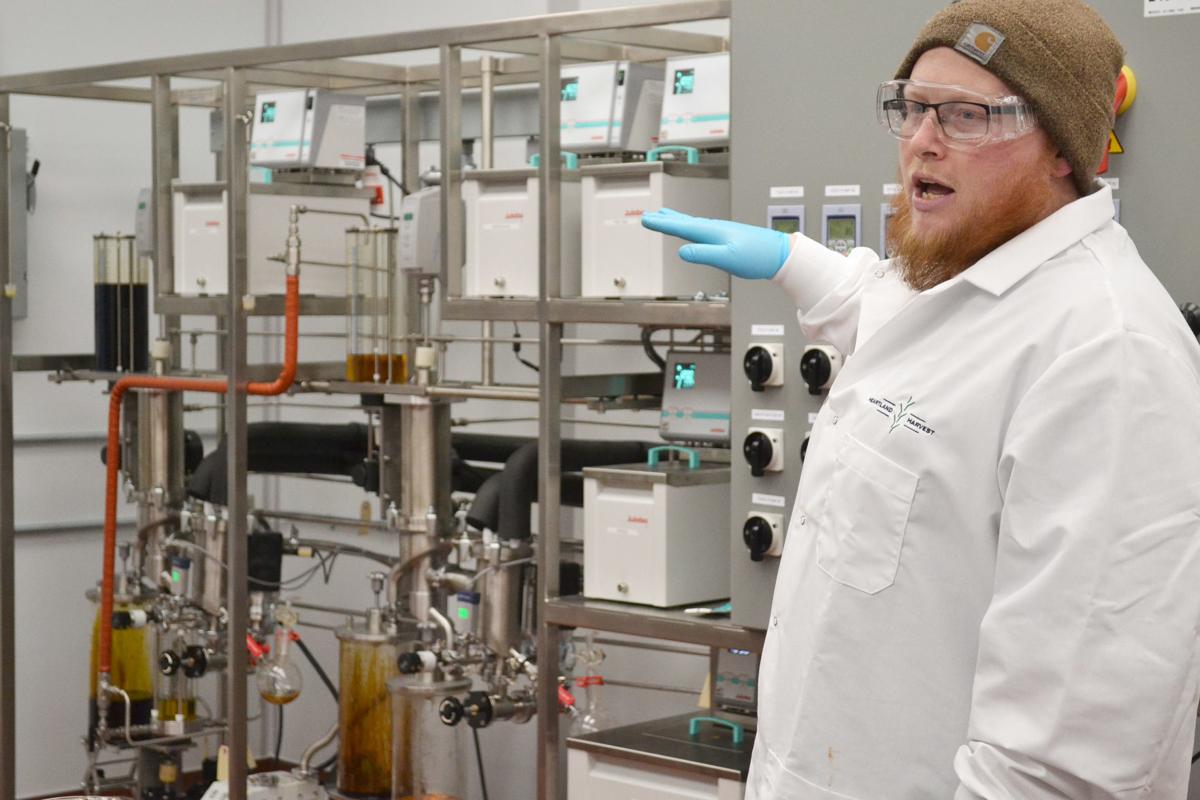 Ian McPike shows the tour group the final stage of CBD oil processing, which removes additives used during processing to create a pure form of CBD with a low THC count. 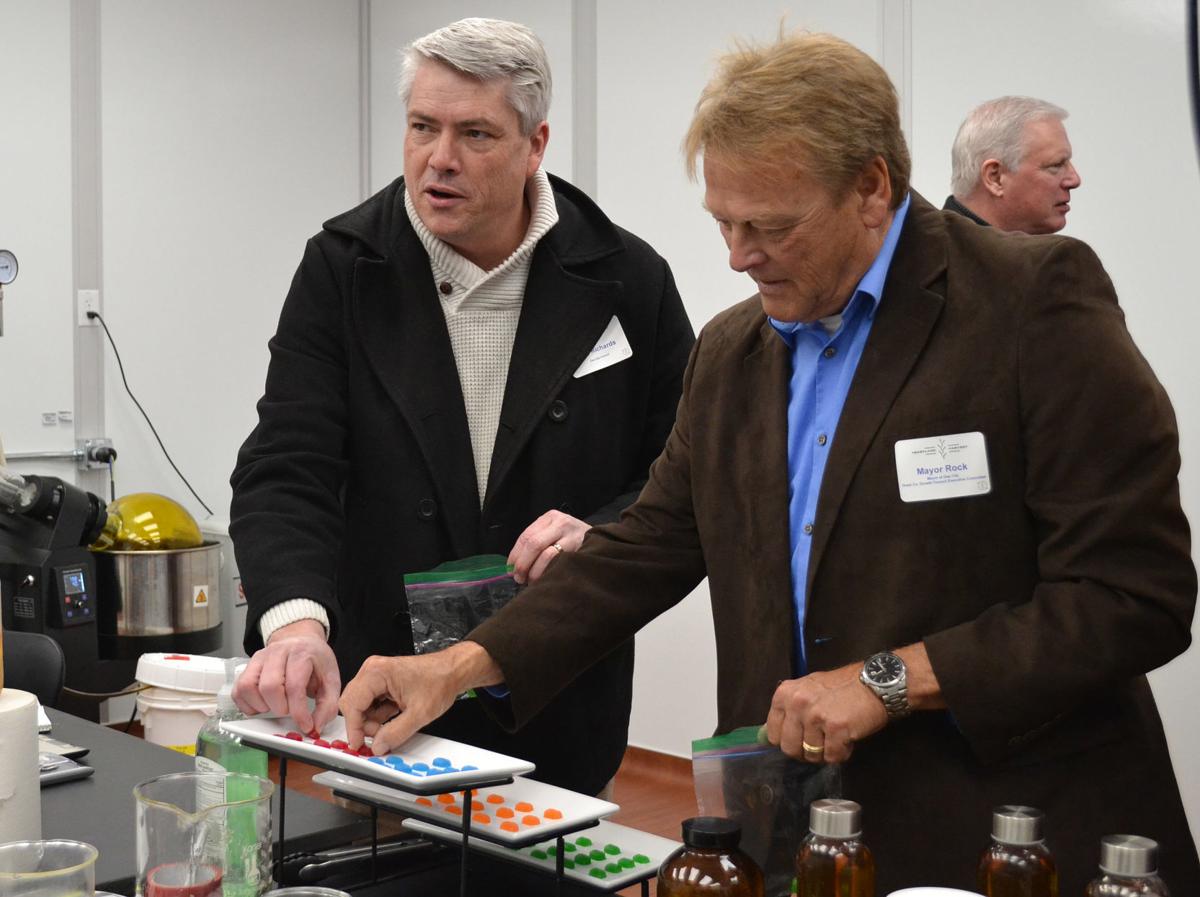 A look inside a bottle of raw hemp buds. These buds are the starting point for CBD products made at the Heartland Harvest plant.

Logan Baker shows a sludge-like crude hemp product to the tour group and explains the process of turning hemp buds into the substance.

Todd Glancy holds up a spoonful of hemp lipids as Gas City Mayor Bill Rock leans in for a closer look.

Ian McPike shows the tour group the final stage of CBD oil processing, which removes additives used during processing to create a pure form of CBD with a low THC count.

Heartland Harvest Processing, LLC owner Adam Kline, of Hartford City, is at the forefront of both Indiana hemp farming and CBD oil processing.

“I come from a family who has farmed, basically, since we got off the boat,” Kline said. “We use organic processes and when we saw hemp as a viable option we jumped at it to be innovative in this space.”

Because the industry is new and few processors are out there, Kline also wanted to open a production facility to provide a “consistent and quality product” in a world of supply chains filled with “bad actors.”

“To be vertically integrated was always the plan. We find that consumers who buy this stuff want to know where it came from and the story behind it,” Kline said. “And we saw that the model before us was broken.”

Since the same company grows and processes the hemp, Kline said buyers can trace every step of the process. “By the time we are done, we can tell just about as good a story about our product as a wine-maker out in Napa Valley,” Kline said.

The primary clients for Heartland Harvest right now are businesses that purchase the CBD oil to create other products such as cosmetics and food products for pets and people, Kline said. The facility also creates CBD isolate, which is a crystallized form of CBD.

After looking at the chosen site in Gas City and other locations near Muncie and Anderson, Kline said he chose Gas City because city and county leaders were welcoming. Kline said leaders were both welcoming of the emerging industry and of his investment in the community.

“We were awestruck that when we called Grant County economic development they were able to get everybody in the room,” Kline said. “Everyone, including councilmen and mayors, sat down and really embraced (us) and wanted to understand the process.”

Production started last September after the first crop of hemp was harvested. The company currently employs four people, which includes Kline and three scientists who were brought in to formalize the process and develop standard procedures for the facility.

Both Gas City and the State of Indiana provided incentives for Heartland Harvest in February to aid Kline’s $1.2 million investment in manufacturing equipment and pledge to add jobs.

Kline is ready to hire two to three production employees immediately and may hire up to 12 by the end of 2020, he said. The pay rate for new employees will be $16 to $18 per hour. The state provided a payroll tax credit for up to 37 new employees over the next 10 years under the Economic Development for a Growing Economy (EDGE) Tax Credit program. According to the Indiana Economic Development Corporation, EDGE, a “refundable corporate income tax credit, is calculated as a percentage (not to exceed 100 percent) of the expected increased tax withholdings generated from new job creation.”

The Gas City City Council approved a personal property tax abatement for equipment being purchased for the expansion. With the abatement, the company will pay $23,936 in taxes, for a savings of $47,303 over five years; compared to $71,239 over five years in taxes without the abatement.

The manufacturing process starts by extracting oil from hemp buds, then winterizing the oil by removing fats and adding ethanol. Next ethanol is removed and finally, the product is distilled and purified, explained Todd Glancy, a Fairmount chemical engineer who came out of retirement to join Heartland Harvest.

Because of the unique process and the custom designed equipment, the facility is able to achieve industry-leading purity in their CBD products, Glancy said. The goal for Heartland Harvest oil that is 90 percent CBD or higher.

“Our target is the mid-90s, with at least 90 percent,” Glancy said. “Most facilities are lucky if they get 70 percent – that’s the difference in our quality. We want to be the highest quality over the highest quantity.”

Kline said he hopes to expand the facility as much as possible as the CBD industry grows. In the future, he hopes to continue increasing production capacity, find markets for hemp product waste created during the production process and possibly create finished products using CBD oils manufactured at the plant.