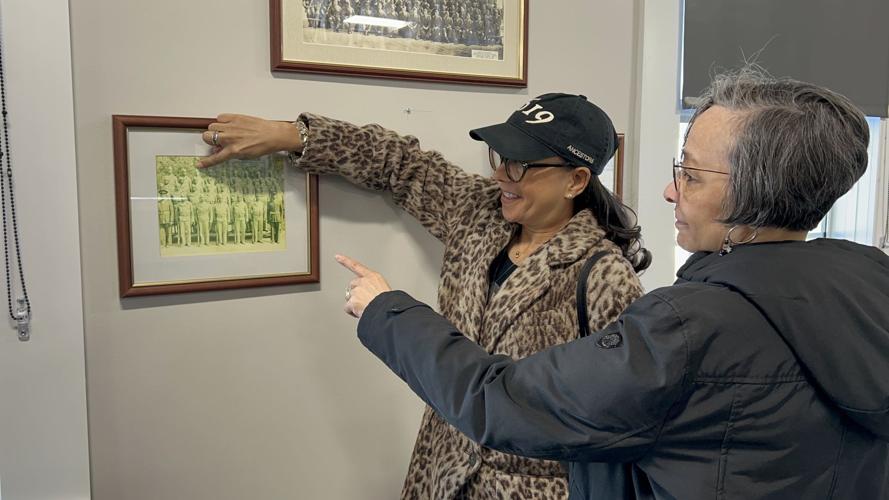 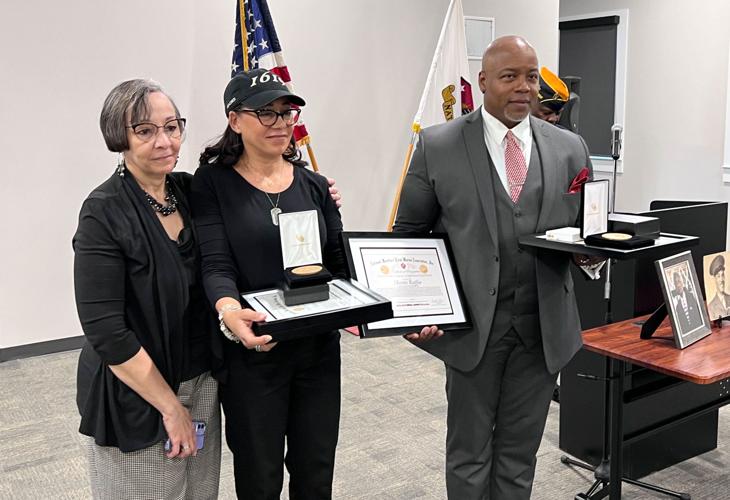 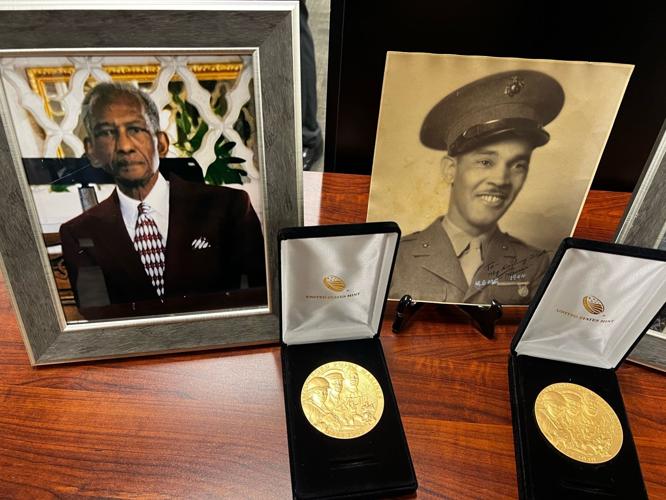 Two Marion natives, Mallorie Marshall Berger and Reginald Moore, did their part to make sure an important piece of Black history would never be forgotten, and they encouraged others to do the same.

In 1941, when the United States, still segregated, was preparing for World War II, members of the NAACP threatened to go on strike because they were not receiving government contracts to help with the war effort, Moore said.

With a workforce made up mostly of Men of Color, Moore said the strike had the potential to hinder the war efforts tremendously. In response, President Roosevelt signed Executive Order 8802, prohibiting racial discrimination in the defense industry or in government.

However, the Black men who enlisted were not allowed to train with their white counterparts at Camp LeJeune. They were sent to Montford Point in North Carolina.

“When they arrived there wasn’t a camp,” Moore said. “It was just a wooded area designated for them to train.”

The men cleared the area, fighting against the elements and animals such as black bears and alligators, to build the camp they would train in.

Berger noted that the budget for Camp LeJeune was around $15 million, while the money set aside for Montford Point was $750,000.

“It was all set up as an experiment meant to fail,” Moore said. “They were not expected to do well in the bootcamp, let alone become marines. Given the environment they were set up in, it wasn’t hard to believe that they would fail. The caveat is that they didn’t fail. They succeeded. They prospered. They showed up and did everything expected of them. Despite the harsh treatment and training, and they became marines.”

The Montford Point Marines were not permitted to go into combat, but were instructed to take care of supplies and do other jobs, until 1949, when the marines were fully integrated and Montford Point was shut down, Moore said.

On Nov. 23, 2011, President Barack Obama signed into law the legislation to award the Congressional Gold Medal to the Montford Point Marines.

Berger was reminded of the documents and photos she had found years before in her late grandfather’s basement. Berger contacted the association, who eventually confirmed that her grandfather, Maurice L. Burns Sr., had been a Montford Point Marine, and would receive a Congressional Gold Medal.

Berger contacted Moore, a childhood friend, to tell him the news. Soon after, Moore discovered that his grandfather, Morris Ruffin, was also a Montford Point Marine.

Berger and Moore received the medals on behalf of their grandfathers.

Morris Ruffin grew up in Louisiana, served from 1942 to 1947, gaining the rank of private first class, before moving to Flint, Michigan, where he and his wife raised their children. Ruffin is recognized as one of the first Black men to work on the assembly line for General Motors, where he worked for 34 years.

Moore described his grandfather as humble, hardworking, and a very proud family man who carried himself with dignity.

“Because of how difficult it was serving in the Marines, and how poorly they were treated, my grandfather never talked about it,” Moore said.

The first and only time Ruffin told Moore he had served was at Moore’s father’s funeral 25 years ago. Moore, who served as a sergeant in the Marine Corps between 1993 and 2003, had worn his uniform to his father’s funeral. Moore said his grandfather mentioned the name of Sergeant Major Gilbert “Hashmark” Johnson, who was one of the first Black drill instructors in the Marine Corps and helped train the 20,000 Montford Point Marines.

Berger said she had known her grandfather served in the Marines, but she said he rarely spoke about it as well.

Berger described her grandfather as a family man who enjoyed people. A brick mason by trade, Burns Sr. did the masonry for Berger’s childhood home at 1106 S. Nebraska St. in the late 1950s.

Born in Talladega, Alabama, Burns Sr. was the grandson of formerly enslaved people.

Burns Sr. served as a private between Jan. 26, 1944, and Sept. 29, 1945, and kept many records from his time in the military, including letters and a “Blue Book” containing photographs of the camp and those he served alongside.

Berger said her grandfather was a “lover of history,” and she feels as though she is keeping the torch burning for him.

“I think my grandfather would be humbled and honored (to receive the medal), but I think he would be surprised that the sacrifices he made would be this significant,” Berger said. “I think he never would have expected this in his wildest dreams.”

Since discovering the “Blue Book,” Berger has successfully contacted two of the families of the men Burns Sr. served alongside, and she is working to track down as many families as possible.

“We’re still missing 18,000,” Berger said. “That’s why this story is so important – not just to tell the story of our grandfathers but to get the word out.”

Moore encouraged people to take the time to look into their history because their family members might not have talked about their service, like Moore’s and Berger’s grandfathers.

“It’s on the families, the children and the grandchildren, to do the research and get their fathers and grandfathers those medals that they deserve,” Moore said. “It’s worth it. It’s worth that little bit of effort. These men deserve that recognition.”

Those who believe they might have relatives who served as Montford Point Marines can email PublicRelations @montfordpointmarines.org.