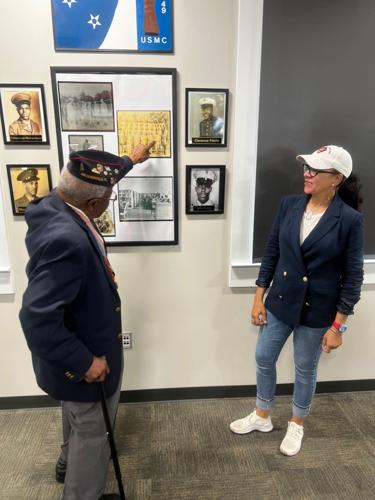 George McIvory, who served in WWII with Berger’s grandfather, Maurice, points himself out to Berger in a photograph of the platoon he and Maurice were in. 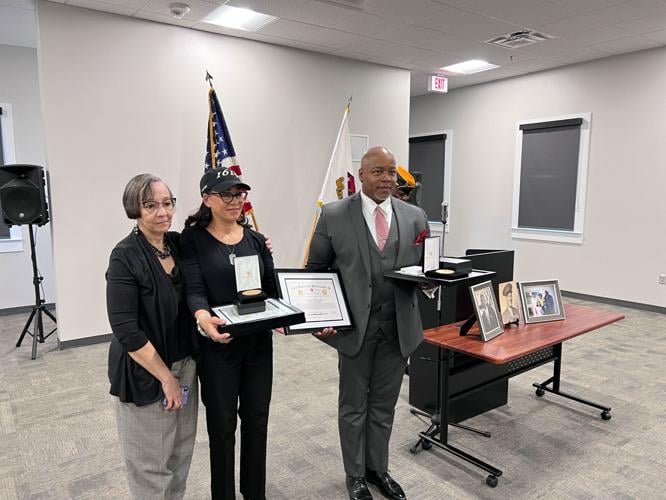 Mallorie Berger and Reginald Moore accept the Congressional Gold Medals for their grandfathers.

George McIvory, who served in WWII with Berger’s grandfather, Maurice, points himself out to Berger in a photograph of the platoon he and Maurice were in.

Mallorie Berger and Reginald Moore accept the Congressional Gold Medals for their grandfathers.

Last fall, childhood friends Mallorie Berger and Reginald Moore discovered that their grandfathers had both been Montford Point Marines and would receive Congressional Gold Medals.

Neither Berger nor Moore had previously realized their grandfathers were Marines, let alone part of a group that made history. The Montford Point Marines were the first group of Black Marines. They succeeded in becoming Marines despite the extreme adversity, poor conditions, and outright hostility they faced at Montford Point.

“The Marine Corps had no intention of actually seeing these men succeed and did not believe they would succeed. They gave them every obstacle to make them fail, and they didn’t,” Moore said.

“I think about my grandfather, and he never even mentioned it. I didn’t even know,” Berger said. “I mean, I knew he was in the military because I had seen photographs of him in military attire, but I never knew what branch.”

Berger was reminded of the documents and photos she had found years before in her late grandfather’s basement. Berger contacted the association, who eventually confirmed that her grandfather, Maurice L. Burns Sr., had been a Montford Point Marine, and would receive a Congressional Gold Medal.

She contacted Moore to tell him the news. Soon after, Moore discovered that his grandfather, Morris Ruffin, was also a Montford Point Marine.

“Just to know that our grandfathers, these men, that we give great reverence to now were even greater men in their youth than we ever even suspected and this is what makes this moment so amazing because they never talked about it,” Moore said. “They never spoke about these moments happening. These were just the something they went through. They got through it and went on to become very well respected in their community, hardworking family men.”

Berger and Moore received the medals on behalf of their grandfathers. Since then, Berger has worked to make sure more Montford Point Marines receive the same recognition. There is not a full record of who was at Montford Point, so many of them have still not received their medals.

Berger has spent a lot of time going through archives at libraries and newspapers trying to find the names of some of the Marines. After a news story about the annual award ceremony, about 65 families reached out to her about it. Despite her efforts, however, still only about 2,000 of the Congressional Gold Medals have been awarded. Berger and Moore hope that the documentary will help spread the word to other families and create awareness to bring more names to light.

“The more we tell them, the more people we find, the more impact it has. So this is kind of our call to action,” Berger said.

When they first discovered that their grandfathers were Montford Point Marines, Berger and Moore reached out to a childhood friend and Marion native, Latondra Newton. Newton is the Senior Vice President, Chief Diversity Officer of The Walt Disney Company.

“The minute she got the message from Reggie, Latondra did not miss a beat because she understood the historical significance of what we were telling her,” Berger said.

Newton immediately reached out to a contact at ABC and set up a meeting with Berger, Moore and two executive producers. The documentary really began taking shape in April 2022. A crew came out to Berger’s home in Florida to interview her.

“I’m apparently a big part of the documentary,” Berger laughed. “I like to be in the background. I don’t really like to be in the foreground. But if I had to do it so that the story can be told and of course, because my grandfather was involved, to make him, you know, front center, I absolutely was down to do that.”

Neither Berger nor Moore lives in Marion anymore, but they wanted to make sure Marion was acknowledged in the documentary. After all, the years Moore, Berger, and Newton spent as friends in Marion growing up were the connections that made the documentary a possibility.

“Yes, we’re giving great exposure to these men, but it’s also a great nod to the history or added history, in a good way of Marion. Marion is a great place to have grown up and Marion has a lot of things that had to offer and this is just part of it,” Moore said. “And we just want to make sure that this part also gets recognized as far as Marion roots and what people from Marion can do with their talents.”