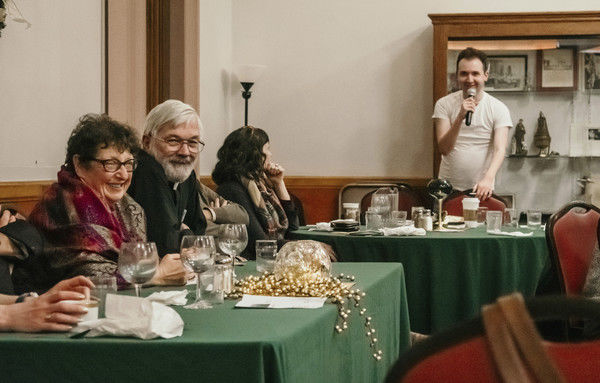 SAFE: Nick Marlatt shares about how Father Jim and Kresha Warnock created a safe place for him and others at Gethsemane on Saturday. 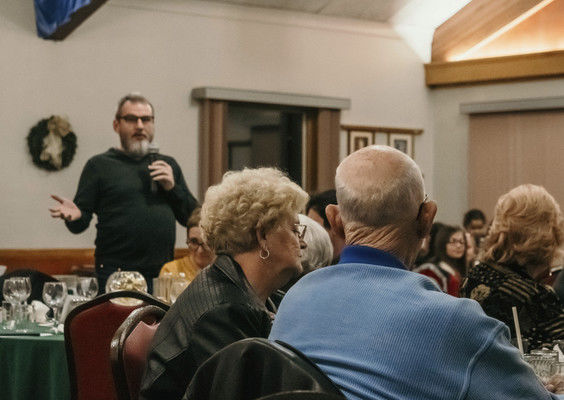 Photos providedSHARE: Taylor University professor, Jeff Cramer, shares about the impact Father Jim has had on him at a dinner on Saturday. 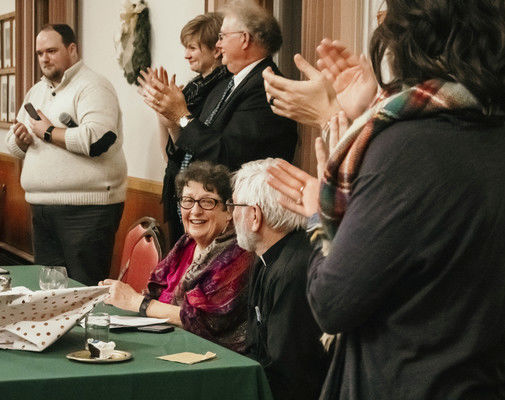 APPLAUSE: Members of the Gethsemane Episcopal Church stand and applaud Jim and Kresha Warnock for their service in the community. 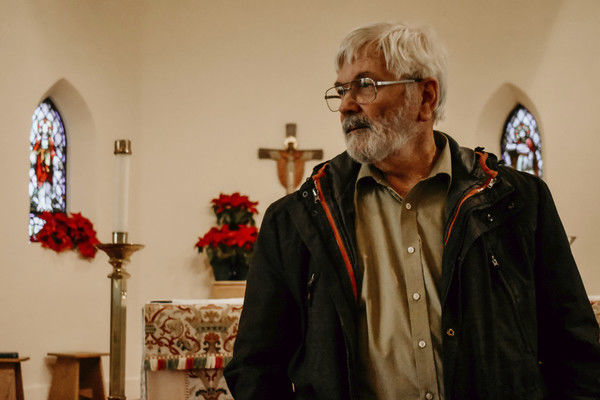 SAFE: Nick Marlatt shares about how Father Jim and Kresha Warnock created a safe place for him and others at Gethsemane on Saturday.

Photos providedSHARE: Taylor University professor, Jeff Cramer, shares about the impact Father Jim has had on him at a dinner on Saturday.

APPLAUSE: Members of the Gethsemane Episcopal Church stand and applaud Jim and Kresha Warnock for their service in the community.

Seventeen years after coming to Marion, Jim and Kresha Warnock are returning to the West Coast.

Since 2002, Jim has served as the priest at Gethsemane Episcopal Church, where he worked to create a safe space for those on the margins.

“Through him, I’ve seen the beauty of solidarity,” said Nick Marlatt, a member of Gethsemane. “He created a place for queer people in the church, not by merely saying all are welcome, but by making Gethsemane a sanctuary for those of us who live on the margins, for those people who society just will not care about.”

According to Randy Powers, the junior warden, during Jim’s time at Gethsemane, he performed 67 baptisms, 94 confirmations, 17 weddings, and 64 funerals.

“Also, while he was here, he put out four postulates, and that’s more than I’ve seen any priest do,” Powers said. “He has a heart for bringing people into the process.”

The San Francisco native did not expect to live in Marion for 17 years, nor did Jim expect to have such a profound impact on the community.

“The church is an entirely different place than it was 17 years ago,” Jim said.

At 51 years old, Jim found that he was often the youngest person in the church.

“Some were a little suspicious of me coming from California,” Jim laughed.

After five years without any young people in the church, a group of twelve Taylor University students showed up one Sunday morning.

“We were nice to them,” Jim said. “We gave them donuts and communion, so they came back.”

Over time, the church began to fill with Taylor and IWU students and faculty, and many young community members. Today, the church is full of people of all ages.

“We’re mostly young families now,” Jim said. “We have a lot of kids. When they all show up, maybe 20 elementary school students and three high school students, and somewhere around a dozen Taylor students still on any given week when they’re in town.”

When asked what drew young people to the church, besides donuts and coffee, Jim said it was their reconciliation ministry.

Cox and Jim traveled to Syria, where they brought together 12 Americans and 12 Syrians to discuss reconciliation.

Since 2007, Gethsemane has hosted one or two reconciliation seminars every year on topics such as racism, sexuality and poverty.

“The racial reconciliation stuff we did, I think, was really important,” Jim said.

Two of the seminars addressed issues of race, one of which had 70 IWU students attending. The speakers and participants asked the question, “What is white supremacy, and are we responsible for the sins of the past?”

“(The sins of the past), in (Marion) is the lynching in 1930, which still kind of hangs over the town,” Jim said. “There has been some progress around that in terms of how to deal with it. I would love to see more racial reconciliation ongoing in this town.”

In 2008, the church held an all-church reconciliation seminar because the more traditional Episcopalian members were becoming suspicious of the newcomers with evangelical backgrounds.

“Episcopalians don’t speak evangelical. We don’t read the same authors the evangelicals read. We don’t listen to the same music,” Jim said. “We got pretty much everybody in the church to come together for a day talking about faith and how they believed, how they related to Jesus, that kind of stuff.”

Jim said he knew the reconciliation work had paid off when one of the older women in the church looked at him and said, “They are actually Christians.”

As he leaves the church, Jim said he hopes his service at Gethsemane taught the congregation how to live together even when they disagree.

“It’s a very progressive church, but we’re not all progressive,” Jim said.

On Dec. 26, Jim officiated the funeral for a woman who often called Jim to complain about his sermons, and even walked out of one of his homilies.

“(She) was a hardcore conservative, and she didn’t agree with anything I preached,” Jim said. “(She) and I were great friends. When I said something that offended her, she would call me and we would argue, but we were still friends. And when her husband was dying, I was there, I brought them communion, and we would talk.”

The Episcopal Church has tended to divide into camps, mostly about human sexuality, Jim said.

“Where you want to be is in the middle where you can talk to each other,” Jim said.

Kresha made her own impact on the community.

She has served as the president and active member of the Indiana Association for the Education of Young Children for years, in addition to her participation in the church.

“I’ve never met a pastors wife like you,” said Sara James to Kresha. “I learned that women were supposed to be this thing, and I wasn’t that thing. It’s really nice to see another woman who’s not that thing either.”

In addition to advocating for children, Kresha participated in the reconciliation ministry at Gethsemane.

“We’ve been very excited to serve as a safe space in the community for many people associated with the colleges, people who might otherwise have been rejected, or people who are struggling with their faith in different ways,” Kresha said.

Kresha said the gift Jim is the space to raise issues and care for those living in fear because of the bias in our society.

“Making this a safe space for everybody, and dealing with issues of race, LGBTQ issues, and immigration and poverty, that’s the gift that he has given to this community,” Kresha said.

When Kresha and Jim came to Marion, they did not think they would stay for long.

The Warnock’s were thinking about leaving when their son David was deployed in Iraq.

Everything changed in 2006 when a roadside bomb hit the back of the Humvee David was driving in Damascus.

On Friday night at 6:30, the Army called the Warnocks to tell them that David had been wounded, and Jim and Kresha would fly to Germany in the morning.

“So for four hours, we thought David was dead,” Jim said.

The Army called again later to say that David had broken his jaw in five places, but they would not need to fly to Germany.

“The church was just absolutely wonderful,” Jim said. “The parish rallied around us, took up a collection, and didn’t tell us to fly him back here. They all knew David. They all loved David.”

Jim said when David insisted on doing a second tour, they decided to stay in Marion as long as he was deployed.

“By the time he was done with his second tour, the church was totally different,” Jim said. “You just don’t find a place like this. That’s the credit of the people, not me. That’s the people.”