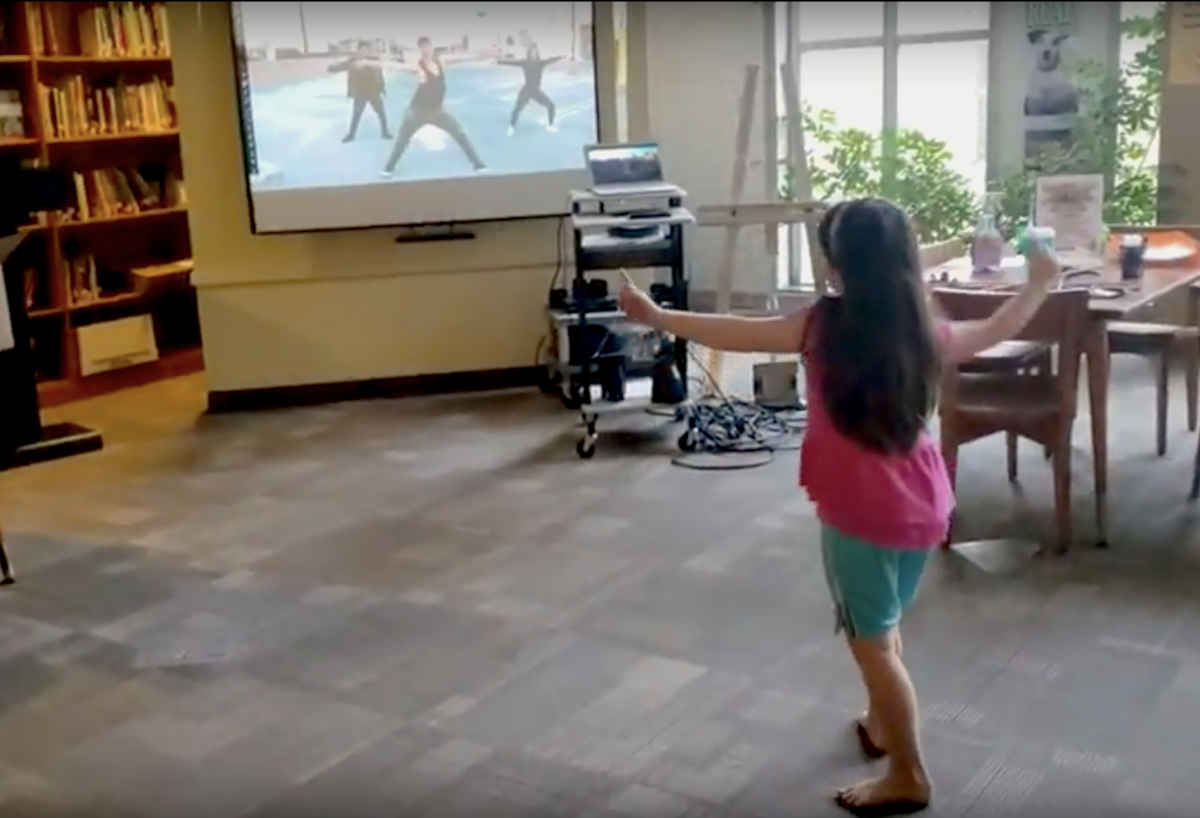 Lula Gibson dances along to a Fitness Marshall video. The Fitness Marshall creators made a kid-friendly playlist to help inspire kids to remain active without any mature moves or suggestive themes like other workout videos on the channel geared toward adults. 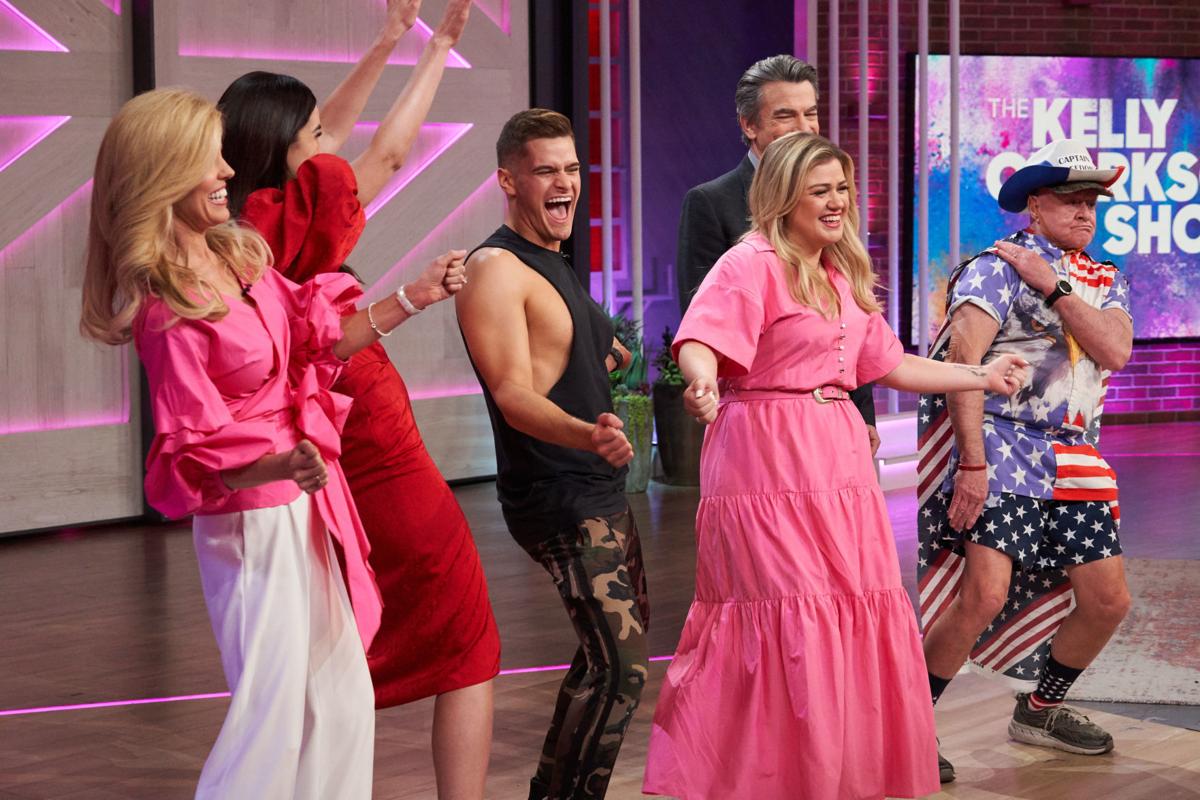 Lula Gibson dances along to a Fitness Marshall video. The Fitness Marshall creators made a kid-friendly playlist to help inspire kids to remain active without any mature moves or suggestive themes like other workout videos on the channel geared toward adults.

Like many young kids these days, 7-year-old Lula Gibson needs a way to release all the energy that gets bottled up from being stuck in her home.

Lula said she enjoys dancing along to Youtube videos by the Fitness Marshall, a group that offers free videos on Youtube to get people moving.

“I really like how they want to help people when they’re in this quarantine by making videos to keep them energetic,” Lula said.

“It’s so cool to see how many different types of people are just inside with their families finding a reason to get up and move and laugh and dance and shine joy in the day,” Marshall said. “That is so special to me, and that’s just my focus right now to keep providing that to people.”

Although her favorite video is “Cheap Thrills,” Lula said she thinks Marshall is funny in all of his videos.

“In ‘Goodbye’ when they are doing the clock arms he’s like, ‘Aw, this burns,’ and that’s really funny to me,” Lula said.

Lula takes dance classes at the Community Center for the Arts, where Marshall danced when he lived in Marion.

“I like (dancing) because it’s basically expressing your feelings with your movement,” Lula said.

“They even made a little video for me that was them saying happy birthday to me,” Lula said.

Thinking about what she would say to the Fitness Marshall, Lula answered, “I would tell him thank you for giving me time to just dance and just move my body.”

Marshall said he identifies as a fitness pop-star.

“I like to think of myself as the lovechild of Richard Simmons and Brittany Spears,” Marshall said. “My goal is just to bring a lot of joy to the world and make everyone feel like they can be confident and powerful in their own body.”

Especially during this time, Marshall said he is trying to put out as much content as possible because people are stuck in their homes. In addition to his regular one-song dances, he is releasing free 30-minute workouts every week.

“This is a really interesting time. Everyone is looking for online fitness right now,” Marshall said. “So it’s a really cool opportunity to be able to provide people something to get through this time.”

While Marshall’s channel is not a kids channel, he created a kid-friendly playlist of some of his videos.

“I really appreciate the fact that a lot of families can do the Fitness Marshall videos together,” Marshall said. “The kid-friendly playlist was a way for me to say hey here’s a list of videos that I personally think that the general population wouldn’t have a problem with.”

All of Marshall’s videos use only clean language, but the kid-friendly videos do not have mature moves or suggestive themes.

“I just think it would make it a little easier for parents who don’t want to have to sit through and watch all the videos through to make sure it’s appropriate for their kids,” Marshall said. “All of the songs are edited just because I want as many people to enjoy them as possible.”

Finding physical activities that children enjoy while they are young is vital.

“When I was a kid, I had a really awful relationship with exercise. I always viewed it as a punishment, and I just wanted to stay inside and play video games,” Marshall said. “The only thing I would do one my own was get up and choreograph dances.”

If a child has negative experiences with working out, Marshall said they would not want to work out when they get older.

“I think that showing kids that there is a way to smile and laugh and have fun while you’re exercising is so important from a young age,” Marshall said. “They are going to take those experiences, and that’s going to shape how they feel about physical activity for the rest of their lives.”

The Fitness Marshall’s mission is to encourage people of all ages, body types, and skill levels to be themselves and have fun dancing.

Marshall said his mission came from his experiences with feeling self-conscious.

“I had a horrible relationship with my body image growing up, feeling like I didn’t look like a dancer, feeling like I didn’t belong in front of the camera,” Marshall said. “I think it’s so important that I created a space in fitness that shows different body types and different levels of dance because it’s not just for the elite or the really fit people or the super coordinated dancers. Anyone can get up and move and feel like they are a superstar.”

Jordan and Marshall moved to Los Angeles two and a half years ago, where they have grown the Fitness Marshall business and developed connections in the entertainment industry.

“It’s really been a whirlwind. Everything out here is so different,” Marshall said. “It’s been a really exciting journey.”

Without the support from friends and family in Marion, Marshall said they would not be where they are now.

Patricia Gibson, Lula’s mother, said her friend, Diana Gardner, had known the group when they were students and connected her with the Fitness Marshall team.