Skip to main content
You are the owner of this article.
Edit Article Add New Article
You have permission to edit this article.
Edit
Home
News
Sports
Opinion
Obituaries
Classifieds
Jobs
Archives
e-Edition
Contact Us
Share This
1 of 5 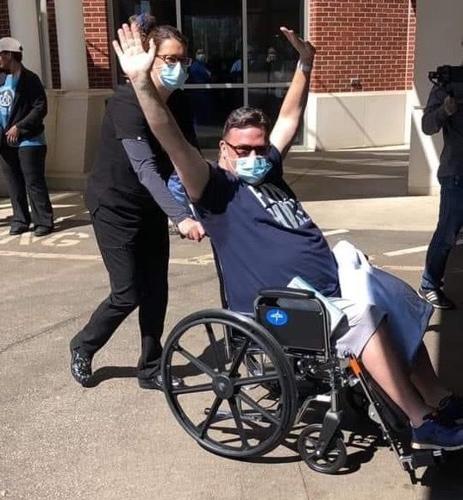 David Henry leaves MGH on May 6 after a long battle against COVID-19. 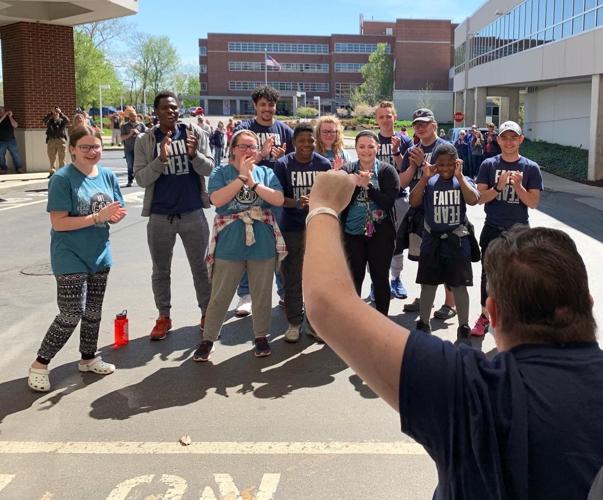 The Henry kids cheer for their father David Henry as he leaves MGH on May 6 after a long battle against COVID-19. 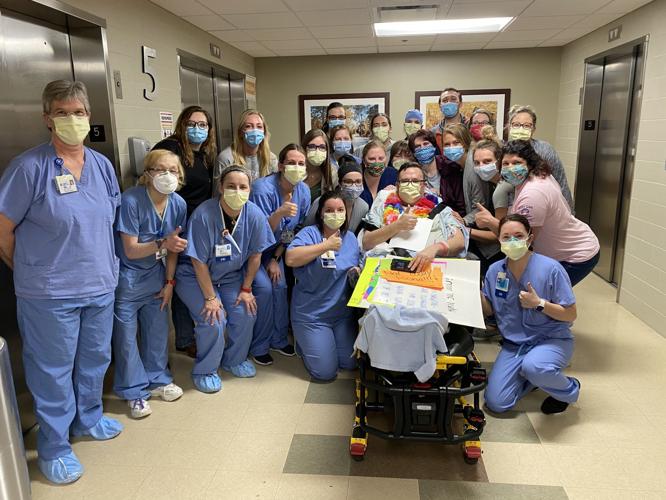 David Henry and his medical team at Lutheran Hospital in Fort Wayne celebrate his recovery and return to MGH on April 29. 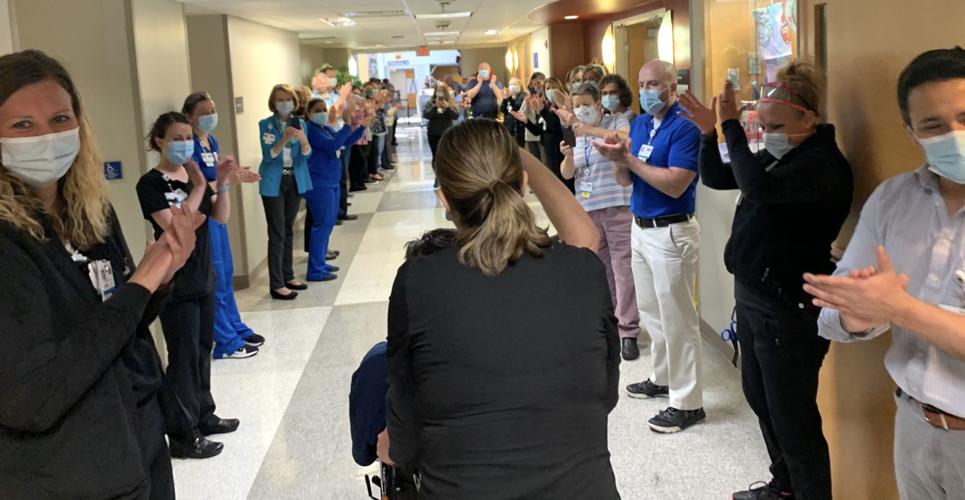 MGH staff celebrate David Henry’s recovery as he left the hospital on May 6. 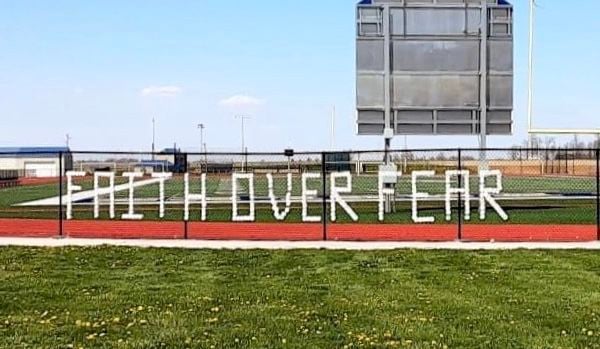 Cups spell out "Faith over fear" on a fence by the Oak Hill football field. David Henry posted a status on Facebook the day he tested positive for COVID-19 in which he said "Faith over fear."

David Henry leaves MGH on May 6 after a long battle against COVID-19.

The Henry kids cheer for their father David Henry as he leaves MGH on May 6 after a long battle against COVID-19.

David Henry and his medical team at Lutheran Hospital in Fort Wayne celebrate his recovery and return to MGH on April 29.

MGH staff celebrate David Henry’s recovery as he left the hospital on May 6.

Cups spell out "Faith over fear" on a fence by the Oak Hill football field. David Henry posted a status on Facebook the day he tested positive for COVID-19 in which he said "Faith over fear."

David Henry does not remember much of what happened on March 26 when he went to the hospital with a fever.

“...but I do remember leaving the house and not kissing my wife (Michele) goodbye,” David said.

David, an Oak Hill teacher of 24 years, had suffered from pneumonia through February and said he knew when he went to the hospital that day that he had COVID-19.

Because he is usually a healthy guy, he said he thought he would be in the hospital for a short time and return home.

“I’m thinking, I am going in, and they are going to treat me, and it will be a week or so,” David said.

Two days after he entered Marion General Hospital (MGH), David was put on a ventilator, and he would be on the ventilator for a total of 28 days, Michele said.

David said he only remembers a few moments of those first two days at MGH.

“I remember being wheeled upstairs and seeing nurses from my church and from the Oak Hill community,” Henry said. “I remember feeling good because I knew that people would care about me and take good care of me.”

He also remembers Dr. Vahid-David Sedaghat taking his hand and praying with him, he said.

“(He) said I’m going to come in and pray with you every day you are here, and we’re going to be prayer partners,” David said.

After David was put on a ventilator, his doctors told Michele that there was a bed in Fort Wayne that could rotate, alleviating some pressure off of his chest, she said.

“Initially, they turned him down because he was too sick and wouldn’t have survived the transfer,” Michele said. “But then he had just the slightest bit of improvement.”

On March 30, David was transferred to Lutheran Hospital in Fort Wayne.

“Then his health declined so badly,” Michele said. “They told me on April 1 that he was not going to survive this. It was pretty hopeless at that point.”

The nurses sent Michele pictures and videos while David was in the hospital, but on April 1, Michele said she received an image of his hand and did not understand what was happening in the photo.

“That night, they didn’t think he was going to make it through the night, so she just sat in his room and held his hand because she didn’t want him to pass alone,” Michele said of one of the nurses.

That day, Michele said she posted on Facebook, asking her friends to pray for a miracle.

“This crazy wave of tons and tons of people that we don’t even know were praying for him,” Michele said.

Members of Brookhaven Wesleyan Church, where Michele works, began organizing 24-hour prayer vigils, gathering outside the Henry household, at MGH and at the church.

“We have friends in Cambodia and Uganda that are missionaries, and they would message me when it was bedtime for me, and they would say, ‘Rest well friend, we have the night shift,’” Michele said.

Although she never slept all night soundly, Michele said she slept better knowing people were praying for her family.

“And then he just started slowly improving,” Michele said. “He just had the tiniest little glimpses that God was helping him here and it just kept adding up to, ‘He’s gonna make it.’”

David said the time he spent unconscious was “a really beautiful peaceful time” for him.

He said he spent the time talking to God.

“It sounds a little fake, but I promise you it’s not fake, I really felt present with God,” David said. “I spent time talking to the Lord about Michele and about each of the kids.”

David and Michele have 11 children, three through birth, two through guardianship and six adopted children.

“In order to be adopted, you have to lose a family first,” David said. “I just prayed about each kid. If God was going to take me, how would they handle another loss?”

David said his kids are getting to the age where some are finding the people they are going to marry.

On Easter Sunday, the doctors woke David up for a breathing trial.

“He only made it an hour, but they were encouraged by that,” Michele said.

David said he felt like he was supposed to say, “My name is David Henry, and I am a child of the one true God” when he woke up but was unable to speak because he still had a tube in his mouth.

The doctors put David back on the ventilator until the last Sunday in April, when they took the tube out, and he made it, Michele said.

“When they pulled the tube out, the first thing I said was, ‘My name is David Henry, and I am a child of the one true God,’” he said.

At the time, David didn’t know that one of the many cards hanging in his room was a picture by a pastor’s young son that said, “Child of the one true God.”

“I just thought that was really interesting that that’s what I felt I was supposed to say, and there it was hanging on the wall,” David said.

Once David could communicate, he had the nurse put pillows beside him with a deodorant that smelled like Michele, he said.

“I got so lonely for my wife,” David said. “We’re best friends. It was tough to be away from her.”

David stayed in Fort Wayne for a few more days before returning to MGH until he finally tested negative for COVID-19 on April 28.

“I didn’t realize until I got to Marion how sick I’d been, of course, I was unconscious,” David said. “Then slowly I became aware that literally thousands of people, people on each continent were praying for us….well not Antarctica.”

Michele said the doctors told them that David would have permanent damage to his lungs, kidneys and brain due to the medicine.

“None of it. I told Michele, I think I’m even funnier than I was before,” David said. “We’re just thankful for the miracle God did.”

David and Michele said they are humbled and grateful for the support they have received from the community.

“I will never buy into the lie that what I do doesn’t matter,” David said. “I will forever be changed because of the miracle God did because these people loved us, prayed for us and supported us. It’s life-changing for me.”

Michele said she received meals from the members of Brookhaven Wesleyan Church and the Oak Hill community.

“I didn’t cook supper for the entire month of April,” Michele said. “People have just been incredible.”

The community created fundraisers, Facebook fan pages and even held a parade for David when he returned home, the streets lined with people wearing “faith over fear” shirts.

“With all the bad things happening, God’s miracle in me has been such an encouragement,” David said. “We’re just so thankful for the community support.”

Michele said the support from the community showed her children that their family would make it through.

“I had to have the conversation with the kids that dad might not make it,” Michele said. “(They were) able to see that many people care about us. It was so good for them to see that no matter what, we were going to be OK. As hard as it was, and as frightening as it was, it was going to be OK.”