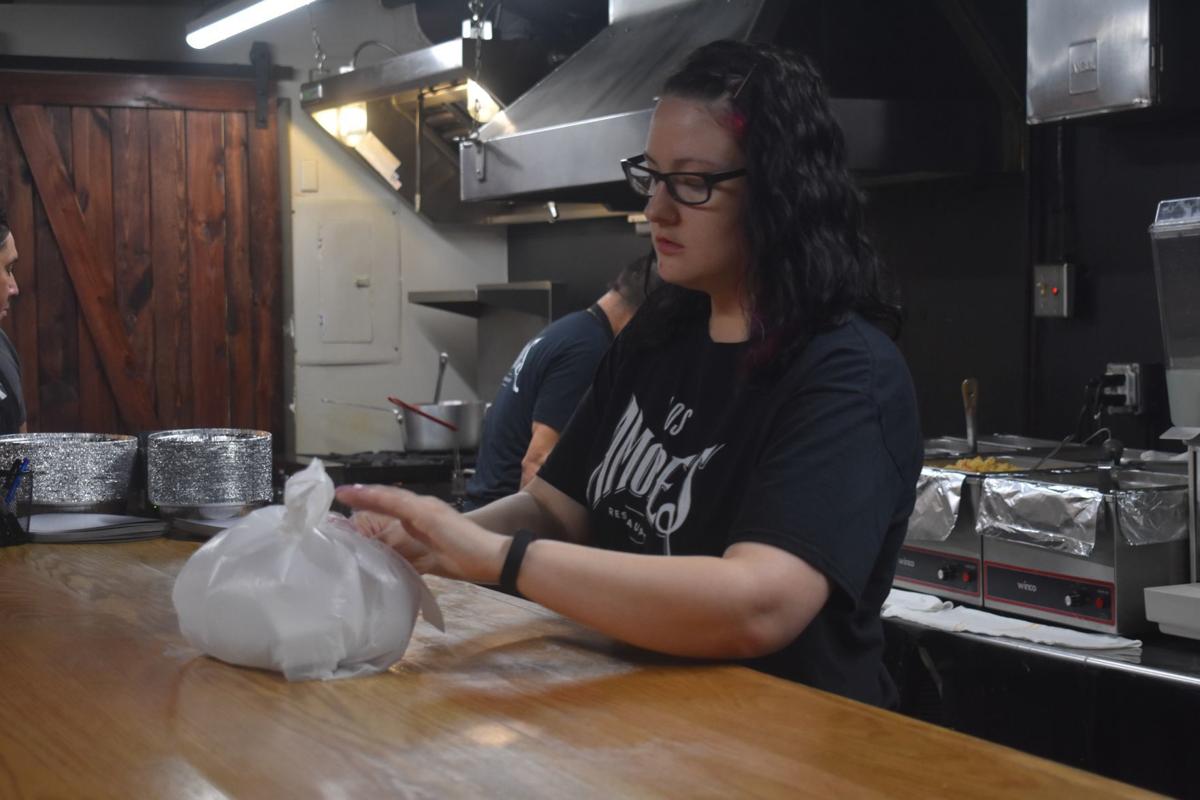 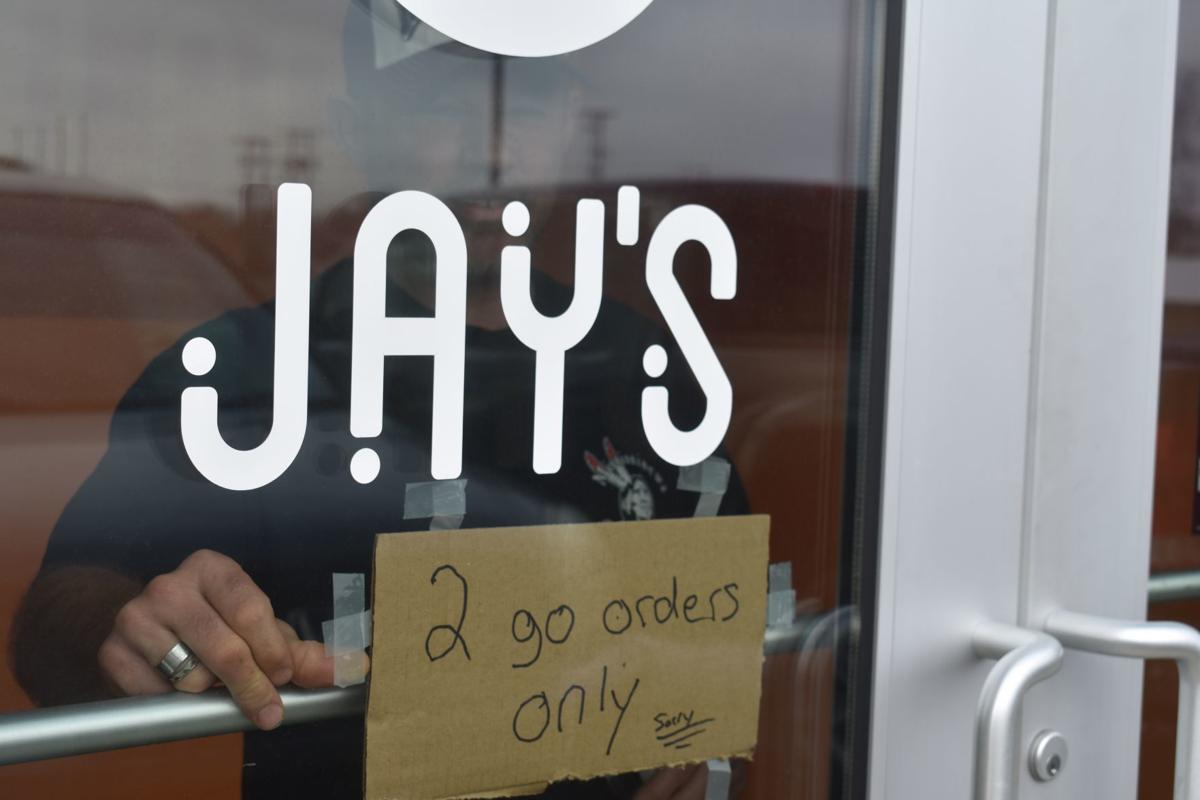 Corey Hart places a sign on the door of Jay’s Thai Food which says, “2 go orders only sorry.” 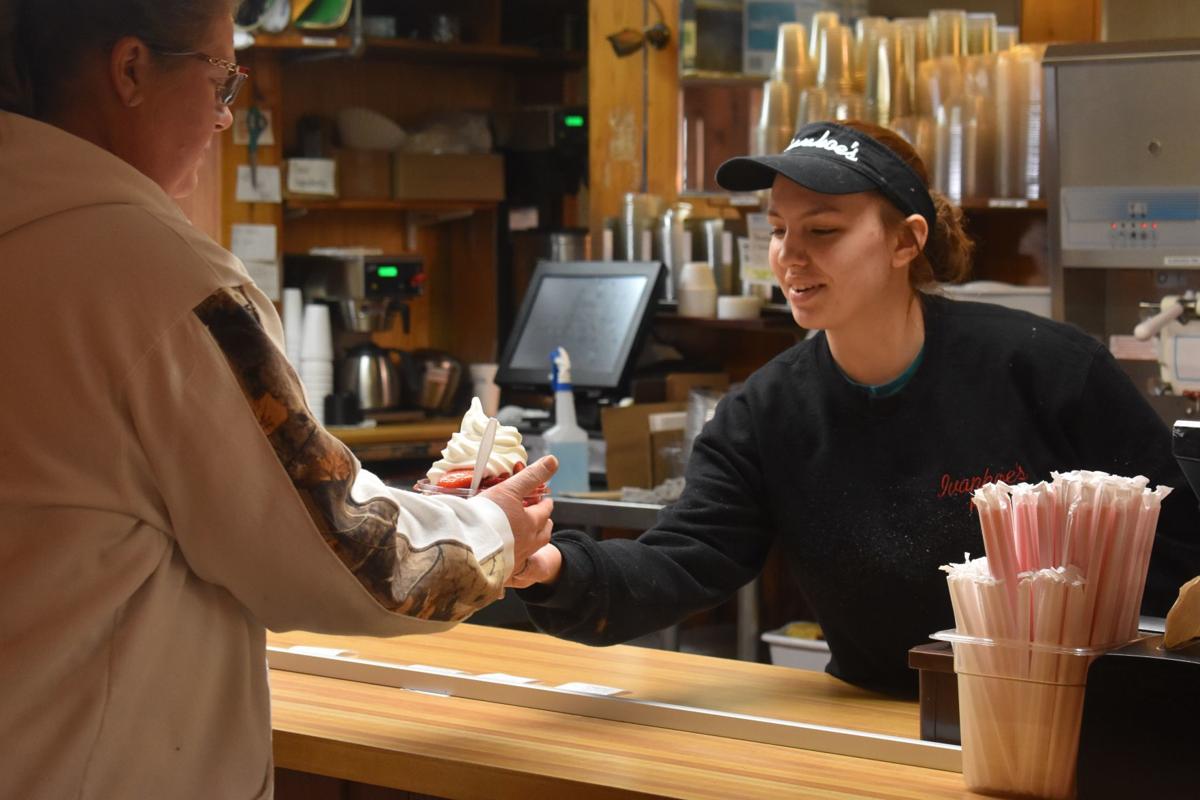 Ariel Carr, an employee at Ivanhoe’s in Upland, hands a strawberry shortcake treat to a customer on Monday, March 16. 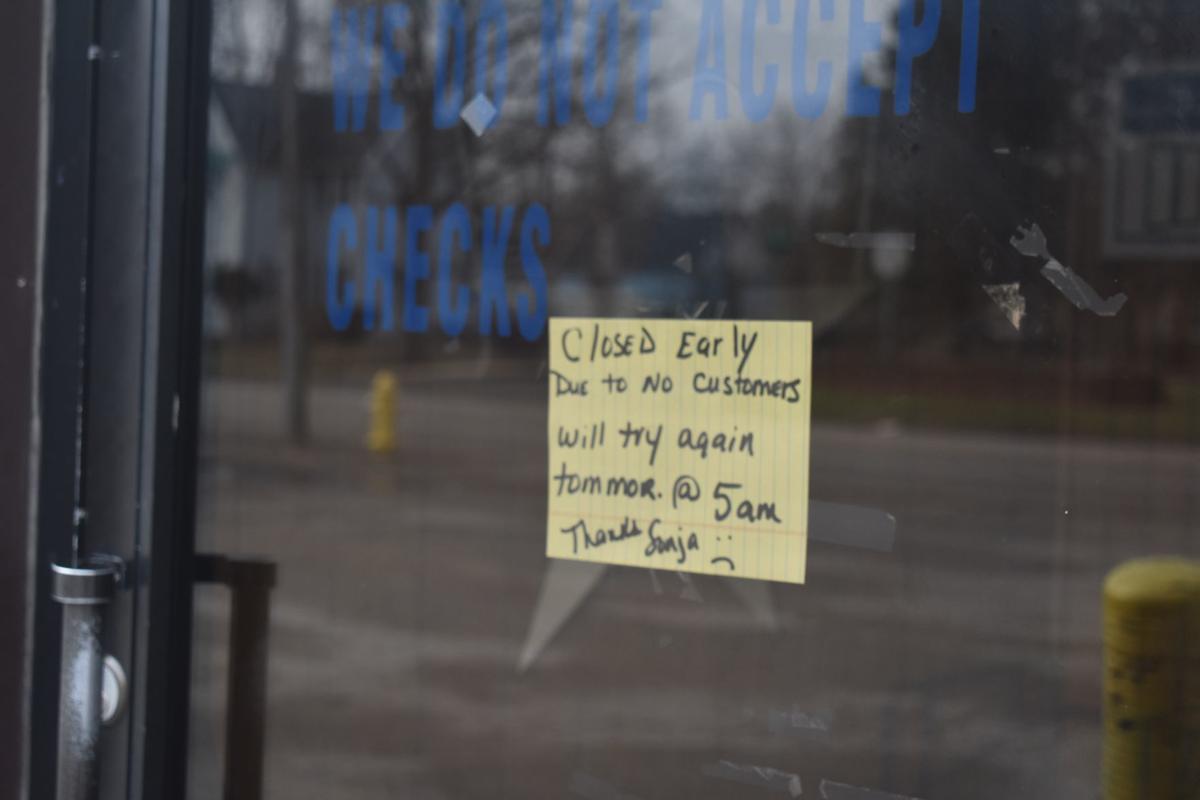 A sign on the door of J & L Breakfast House in Marion states that the restaurant closed on Tuesday due to a lack of customers, but will reopen on Wednesday at 5 a.m. for carry out orders.

Corey Hart places a sign on the door of Jay’s Thai Food which says, “2 go orders only sorry.”

Ariel Carr, an employee at Ivanhoe’s in Upland, hands a strawberry shortcake treat to a customer on Monday, March 16.

A sign on the door of J & L Breakfast House in Marion states that the restaurant closed on Tuesday due to a lack of customers, but will reopen on Wednesday at 5 a.m. for carry out orders.

Local restaurants are suffering due to recent government mandates aimed at reducing the spread of the novel coronavirus COVID-19.

On Monday afternoon, Indiana Governor Eric J. Holcomb announced that all bars and restaurants are required to suspend dine-in service, but may offer take-out and delivery services through the end of March.

After 10 months in business, Keith Bennett, co-owner of Los Amores Restaurant in Marion, said he is both afraid of the impact this will have on his business and full of faith.

“It’s not a secret that we’re Christian business owners, and we believe that God knows the beginning from the end,” Bennett said. “It’s testing our faith for sure.”

If the governor’s request extends beyond the end of the month, Bennett said he is not sure if the restaurant will make it.

“I’m not one of those business owners who has deep pockets, so I’m not going to be able to float it all summer,” Bennett said. “We put our whole lives into this business downtown. It’ll put us in a pretty bad situation if we can’t recover from this.”

Bennett said he is also aware of the impact this change is having on his employees, most of whom rely on tips to pay their bills.

“I’m doing everything that I can,” Bennett said. “I’ve kept as many (employees) as I possibly can.”

Some of his employees who attend Indiana Wesleyan University have returned home to be with their families. One employee is unable to work because she has to be with her children, and two employees had to be let go, he said.

The minimum cash wage for servers in the state of Indiana is $2.13 per hour.

While Bennett said he pays his servers above this minimum wage, he said many people do not tip on carry-out orders.

Steffani Shelby, a server at Los Amores, said she understands the importance of the governor’s request because her mother is a nurse.

“Obviously it stinks because it’s how I make my money, how I pay my bills,” Shelby said. “All my friends are in food service, and right now money-wise, it’s hitting us very hard.”

Shelby said she understands how those working in retail and in restaurants are among those more likely to be exposed to the virus due to how many people they come in contact with daily.

“My partner and roommate both work in retail. Between the three of us, we probably come into contact with 3,000 people a day,” Shelby said. “I understand it’s for protection.”

Shelby said she encourages people to support local restaurants by buying gift cards now and using them when the dining room opens at a later date.

Shelby and Bennett both said that the change is hurting many other local restaurants as well.

“I’m not the only one that this is affecting,” Bennett said. “There are a lot of small businesses like me that if this lasts three or four months, they are not going to make it.”

Larry Hart, the husband of Zosima Hart, who is the owner of Jay’s Thai Food in Marion and Kokomo, said they are feeling the impact of the governor’s request already.

“Of course, I will probably have to go out of business,” Hart said. “It’ll really hurt here.”

Hart said he has already had to lay off two employees in Kokomo, and fears he will not be able to meet payroll for the workers in Marion.

“Our boat was almost ready to sink, and now I think it sunk us,” Hart said. “We were just kind of breaking even, and now we will go in the hole, I know.”

Larry’s nephew, Corey Hart, said Jay’s Thai Food has many faithful customers that have supported them in the past.

“It’s paying the employees, but it’s not paying the bills,” Corey said.

“We won’t do nearly the business that we do when we are open and have the dining room,” Souers said. “And then you start wondering about your employees, the ones that have a family and are full time…Everybody has bills to pay.”

Souers said he plans to keep regular hours and offer call-ahead ordering for the take-out only service.

He encouraged customers to eat their food in their car like they did when Ivanhoe’s first opened.