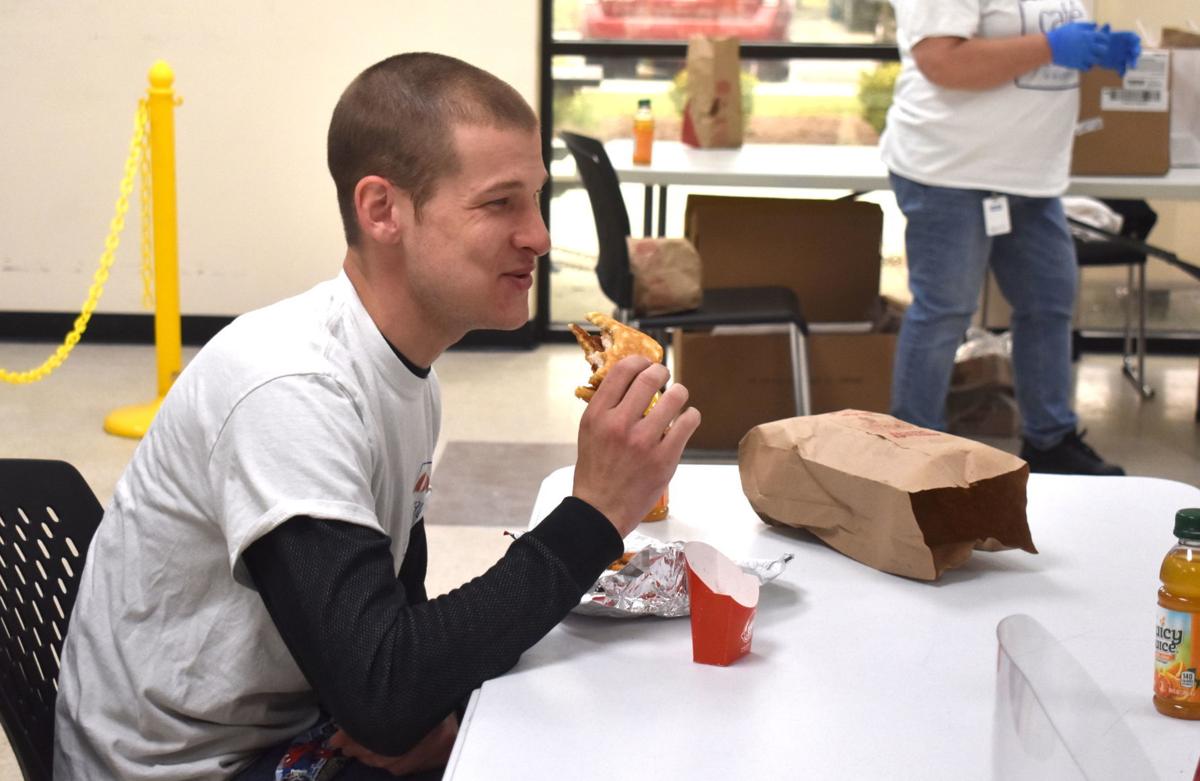 James Carter enjoys his free breakfast at Cafe Valley on Tuesday. “They do stuff like this all the time,” Carter said. 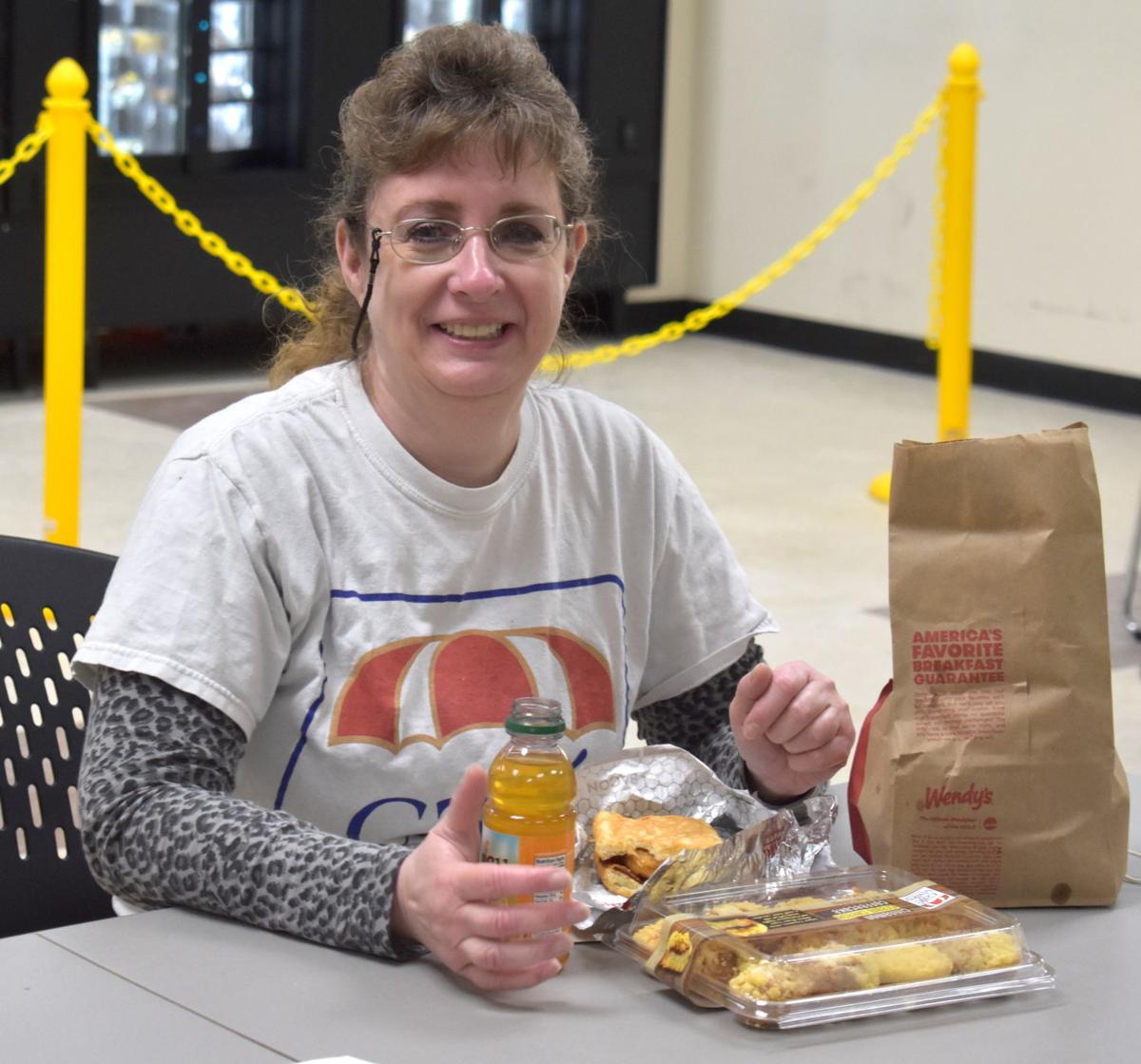 Catherine Price smiles as she prepares to eat her free breakfast at the Cafe Valley employee appreciation party on Tuesday May 12.

James Carter enjoys his free breakfast at Cafe Valley on Tuesday. “They do stuff like this all the time,” Carter said.

Catherine Price smiles as she prepares to eat her free breakfast at the Cafe Valley employee appreciation party on Tuesday May 12.

With a smile under her mask, Dottie Wilkerson served the Cafe Valley employees free breakfast at the employee appreciation party Tuesday morning.

“I just feel that our employees earned it,” said Wilkerson, the store manager of the Cafe Valley outlet store. “They work hard out there.”

At the end of March, at least 100 Cafe Valley employees voluntarily self-quarantined for two weeks after General Manager Paul Dash announced that one maintenance worker had tested positive for COVID-19, according to previous Chronicle-Tribune reporting.

“We did lose a bunch of people when we had a COVID threat three weeks ago, and many have not returned,” Dash said. “Even though we’re doing all the best practices for separation and distancing and protecting their folks, there’s still a level of stress and fear.”

Despite the fear and stress, many Cafe Valley employees have returned to work.

“These are not easy times for anyone,” Dash said. “It’s time to start saying thank you to our folks.”

“There’s a lot of companies out there that don’t give their employees anything. This one at least cares enough to give them something to say, ‘Hey, we appreciate you,’” Wilkerson said. “They were short people, and they just had to all pitch in and work as a team.”

Rachel Davis, the lead of lamination at Cafe Valley, said the employees have had to endure many changes since the coronavirus outbreak.

“It’s been stressful for some people,” Davis said. “(It’s) hard because people don’t like change.”

Some of the changes include separate entrances and exits for production and packaging staff, daily screening, additional personal protective equipment (PPE) and inconsistent hours due to shifting production lines.

“You don’t know. Today (you) might have to leave early and won’t get as many hours, and (you might) need that 40-hour check, or you may get more hours than you need, and you have babysitting issues and things like that,” Davis said. “So, it is stressful for everyone.”

Davis said that because they have had to prioritize getting certain products out before others, they sometimes shut down a particular production line and move those workers to a different line.

“If a person besides you isn’t here and then you get a person who hasn’t been here or doesn’t know, you have to work double work to make sure it,” Davis said.

Although the recent weeks have been more stressful, Davis said she believes the work they are doing is essential.

“Some people don’t feel that we are essential,” Davis said. “But it’s true everybody needs food. Elderly people who can’t cook at home or can’t stop at the grocery store will stop at (a fast food restaurant) to get a sandwich for breakfast or dinner.”

As an essential worker, Davis said she feels lucky to still be able to work, especially for a company that shows their appreciation for their employees.

“I didn’t have to worry, but a lot of people do,” Davis said. “It’s very nice. A little bit of appreciation goes a long way.”

For Catherine Price, a Cafe Valley employee of more than four and a half years said the hardest part for her has been wearing the additional PPE.

“It’s hard to breathe with these things on our faces, and my glasses steam up, and it’s just crazy,” Price said. “I know we have to do it. They are doing everything they can to keep us safe.”

Price said the workspace is always being cleaned, and curtains have been added to separate workers on each production line, including the croissant line that Price works on.

Price said she was grateful to have a job she likes and for the free breakfast.

“I’m just glad I still have a job because a lot of companies closed. I know there’s a lot of people out of work right now,” Price said. “I’m glad they appreciate us.”