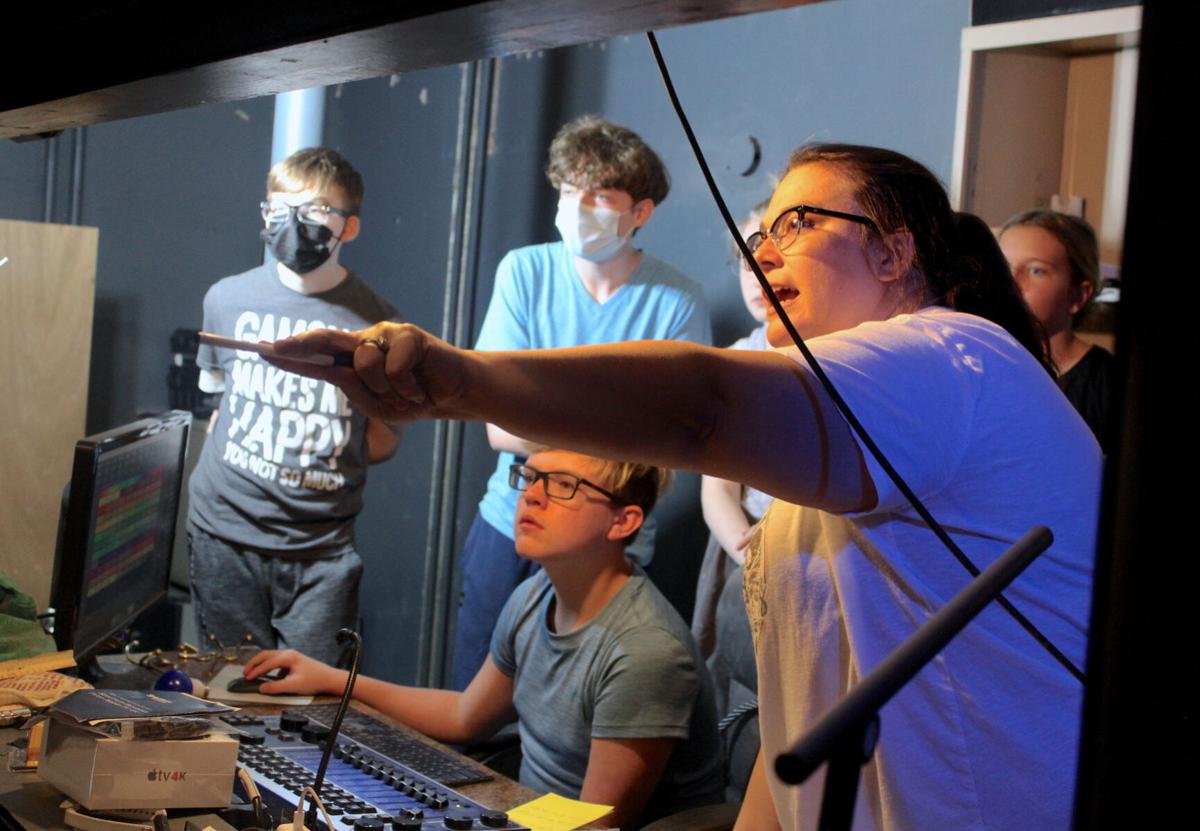 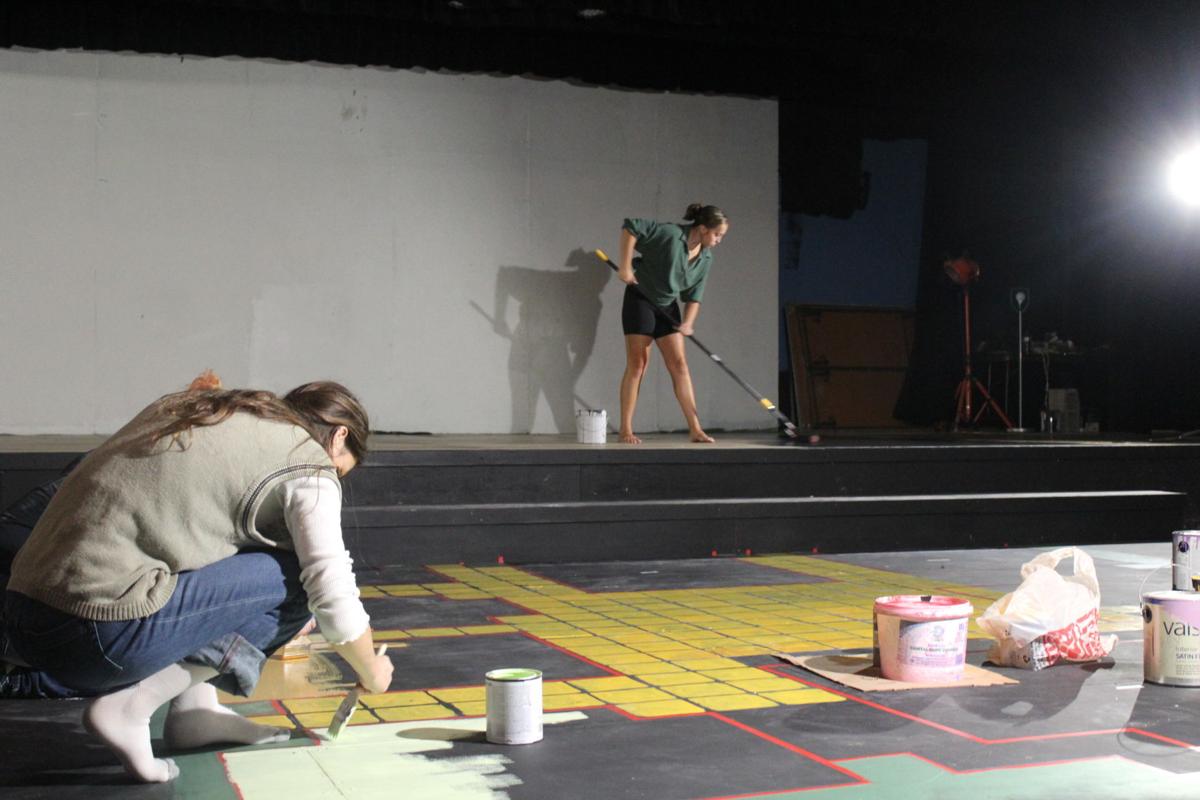 CSA students paint the stage in preparation for the production of “Clue” opening on Oct. 7. The Clue game board is being painted onto the “thrust stage” which will be surrounded by audience members on three sides.

CSA students paint the stage in preparation for the production of “Clue” opening on Oct. 7. The Clue game board is being painted onto the “thrust stage” which will be surrounded by audience members on three sides.

The James Dean Memorial Theatre is in phase one of renovations designed to encourage locals to engage with their community.

After acquiring the Marion Civic Theatre (MCT), the leadership of the Community School of the Arts (CSA) began reenvisioning the performance space.

Katie Morgan, the executive director of CSA, said she was excited to make improvements to the space, but still wanted to honor the 70 years that went into MCT. Morgan said the building is dear to her. Her father was on the MCT board when the organization got the building in the 90s.

CSA artistic director Shelly Inskeep said she remembered seeing the very first show MCT performed in the space, after years of hosting performances at the Walton Performing Arts Center. Inskeep said she hopes to improve the space for the community.

“That’s kind of the goal: How can we better tell these stories and how can we focus on the story that’s happening and create an environment that makes the story and the storytellers the focus?” Inskeep said.

Morgan said it was important to them that the building had an entrance on Washington Street, to encourage audience members to visit other new downtown businesses.

“(We asked) ‘How can we make this (theatre) part of the excitement that’s happening downtown?’” Morgan said. “The more downtown develops, the more likely people will come downtown to see a show at the Civic Theatre.”

The building was recently painted gray and black to match the CSA building on the downtown square. Most of the changes to the building have taken place within the performance space, including new lights, sound equipment, and a new type of stage.

“We have a very high expectation of quality of performance,” Morgan said. “This is community theatre. It’s an opportunity for members of the community to come together and tell a story. How can we do that in a way that is really beautiful? (MCT) was doing a very good job with what they had and we were excited to put a little bit of an investment into the lights and sound.”

Morgan said renovations will take up to three years to complete, but the first phase will be done by the first show, “Clue” which opens on Oct. 7.

Those who attend the performance will quickly notice that the stage is set up differently.

Andrew Daniels, a ten year member of MCT and a current member of CSA Theatre faculty, said he had been hoping to create a “thrust stage” in the theatre for years.

A thrust stage is a stage that is surrounded by audience members on three sides, often used in Shakespearean productions.

“It’s a community theatre. One of the reasons I really pushed for a thrust stage is now you’re able to be out there and look other people in the community in the eye,” Daniels said.

Daniels said actors will be able to turn and speak right to their family members and friends sitting in the front row, involving the audience in the telling of the story.

“I think that’s something this community needs a lot more of – that community connection. I think it’s something people really want too,” Daniels said. “Obviously it’s going to be new, but I think it will excite people when they see it.”

Beyond the physical renovations to the space, Morgan said they are trying to build a theatre space that will continue to grow.

“It’s so much more than these renovations. It’s renovating the entire thing, the programming, the technical quality of the productions, and creating an experience that’s new and different and fresh but still honoring the space and the traditions that are here,” Morgan said.

One of Morgan and Inskeep’s goals is to train young people in both production and performance with the hopes that they will continue the tradition of community theatre.

“We sure hope that some of them want to stay and continue to see the arts grow and thrive in this community,” Morgan said. “Maybe several of them have taken stage management class and maybe they’re going to come back and raise a family and twice a year they want to help stage manage a show. That’s how community theatre lives.”

Opening night of “Clue,” and Thursday performance of all future shows will be “community nights,” Inskeep said. CSA will raise donations over a period of time and then donate tickets to local organizations, such as the senior center, VA, and the Boys and Girls Club. Free popcorn will be available.

This winter, the newly renovated space will house the performance of “The Best Christmas Pageant Ever.” In February, the company will perform a play called “Sweat.” The April show will be “Pride and Prejudice,” and the 2022 summer musical will be “The Sound of Music.”

Each summer musical will take place at the Walton Performing Arts Center, where MCT performed before acquiring the building.