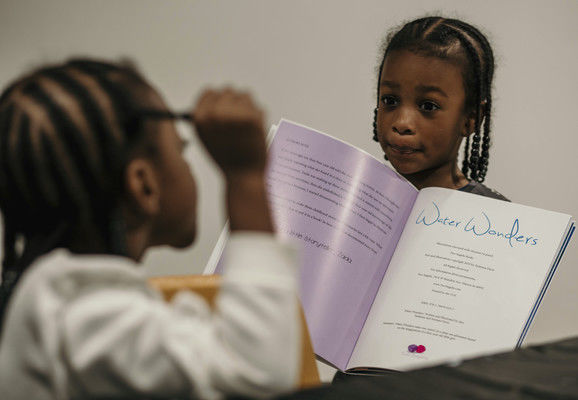 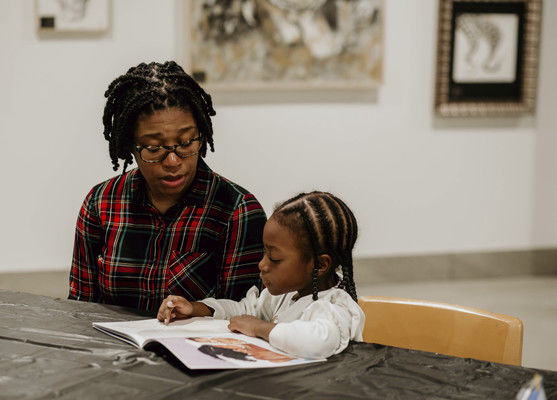 READ: Zaida Davis reads “SPECtacular Sisters: Water Wonders” to her mother, Tashema Davis. Tashema said one of her proudest moments was when Zaida was reading the book to herself, and she pointed out her name. “That makes me feel so good inside that she can see her name and her face in the book,” Tashema said.

READ: Zaida Davis reads “SPECtacular Sisters: Water Wonders” to her mother, Tashema Davis. Tashema said one of her proudest moments was when Zaida was reading the book to herself, and she pointed out her name. “That makes me feel so good inside that she can see her name and her face in the book,” Tashema said.

At the age of 4, Zaida Davis began telling stories to her younger sister in the car.

“I heard her say, ‘Buckle your seat, Mimi, we’re going to blast off!’ So I really started listening,” said Zaida’s mother, Tashema Davis. “As I put the truck in reverse and she did a countdown, ‘3-2-1-blastoff!’”

Two years later, Tashema has published “The SPECtacular Sisters: Water Wonders,” a children’s book based on one of Zaida’s stories.

“(Zaida and Amiyah) love bath time. That’s how this one was created,” Tashema said. “So they would be in the bathtub, and she is telling the story, which she’s always done. I had to encourage her to keep telling the story without injecting my personal feelings towards it.”

Tashema began writing down the stories she heard Zaida telling her sister, and she later painted pictures of her daughters for the book. Tashema is an artist, art teacher at Marion High School and the owner of the Echo art gallery in downtown Marion.

“Water Wonders” is the first of three of Zaida’s stories Tashema captured.

“That year, she was just spitting out stories, but I only caught three,” Tashema said.

The adventures begin when the “SPECtacular Sisters” put on their sunglasses.

“When (Zaida) got a little older, she wanted sunglasses, so I just started buying them whenever I saw cute ones or fancy ones,” Tashema said. “In the car, she will have her glasses on, and she will do her countdown. It’s just sort of took off from there.”

Tashema said she has loved watching Zaida see her stories come to life in a book, and Amiyah is beginning to ask about when she will have a book of her own.

“It’s just been a fun way to connect with them and constantly get them to be creative,” Tashema said.

To stay creative, Tashema would draw on her iPad when she would get home from work, and her daughters would ask her what she was drawing.

“At first I was like, ‘This is my thing,’” Tashema said. “But then I realized that they were really interested in it, so why push them away or shun them when we could make this a family thing?”

“I sit down and ask (Zaida and Amiyah) questions, and whatever answer they give me, that’s how I create (the drawings). I usually do drawings first with the iPad, and then they will add to it,” Tashema said. “Once I have 15 to 20 drawings, then I let (my husband) see them, and then we come up with a story from there.”

Although the stories always have a beginning, middle and end, Tashema said Keenan, Zaida’s father, helps connect the pieces of her stories when they are stuck.

“It keeps the creativity going, and it becomes a family thing, and I love it,” Tashema said.

Zaida said she tells a lot of stories every day.

“They’re about imagination and what I do and what we do together,” Zaida said.

According to Zaida, her little sister liked her stories, “a little bit.”

When asked who should read her book, Zaida said, “Everybody, so they know that that is my book.”

Zaida sees more than just her own words in this book. She sees characters that look like herself.

“They did not see a lot of brown skin in stories they were reading or stories they saw on television,” Tashema said.

Tashema said many people, especially in schools, do not notice the lack of diversity in books and television.

The lack of diversity impacts students in a significant way, according to Tashema.

“But being on the other end of that and not being able to see yourself, it’s a huge disappointment,” Tashema said. “And then it starts to play into your self-worth and what you value to be beautiful.”

Tashema said she decided to do something about this issue.

“I said, well, I can create, so I’m going to put you in the book,” she said. “I did not want her to continue to question anything. I wanted her to pick up a book and be able to see herself – literally.”

As Tashema creates more children’s books like this one, she plans to continue to include more diversity.

“I don’t want it to be only black characters. I want it to be more so the missing link, the gap,” Tashema said. “There are not enough books that show brown kids using their creativity and imagination. There’s not enough of these.”