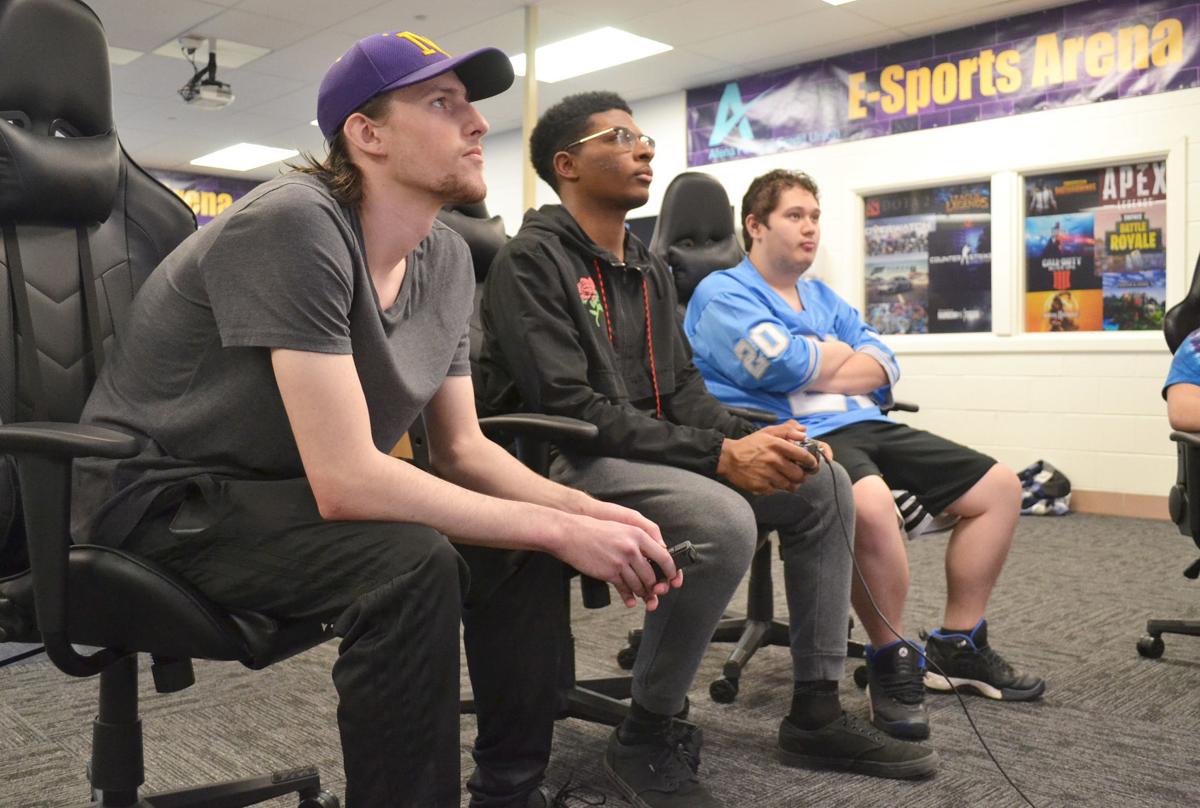 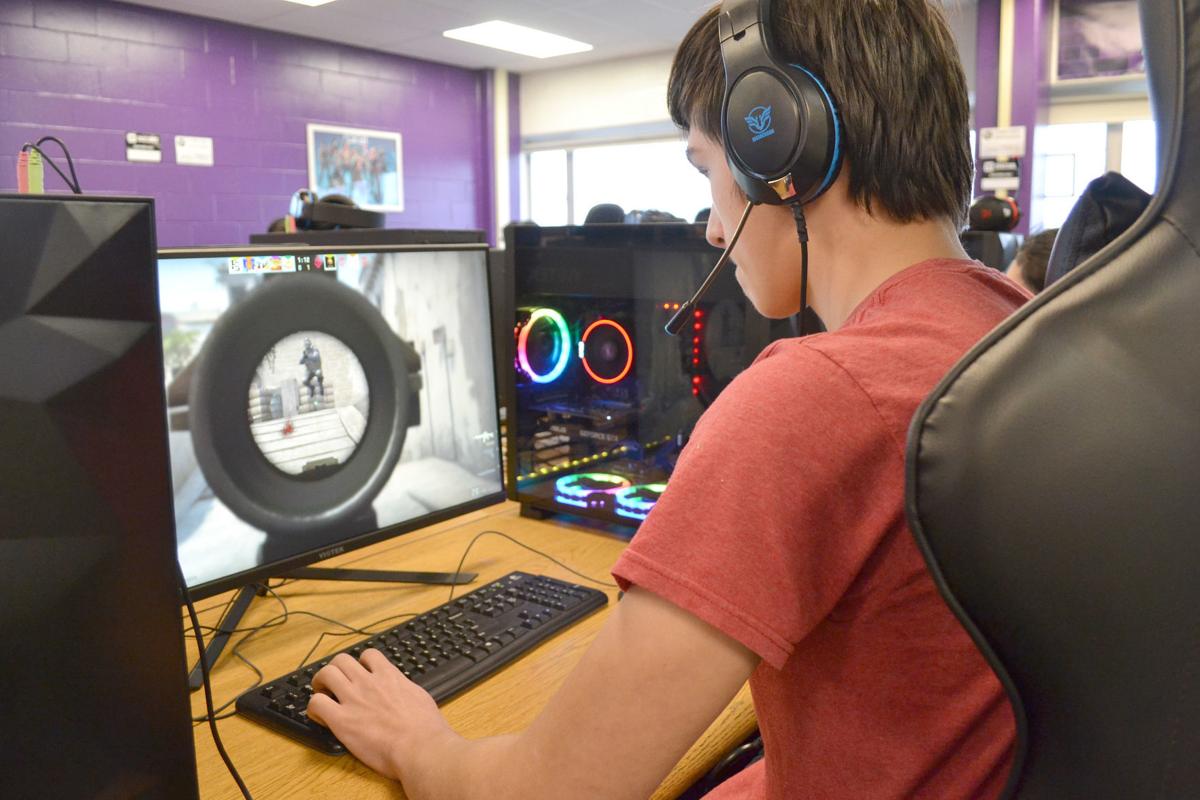 Zaih Collins has an enemy in his sight during practice at Giant E-sports practice Tuesday. 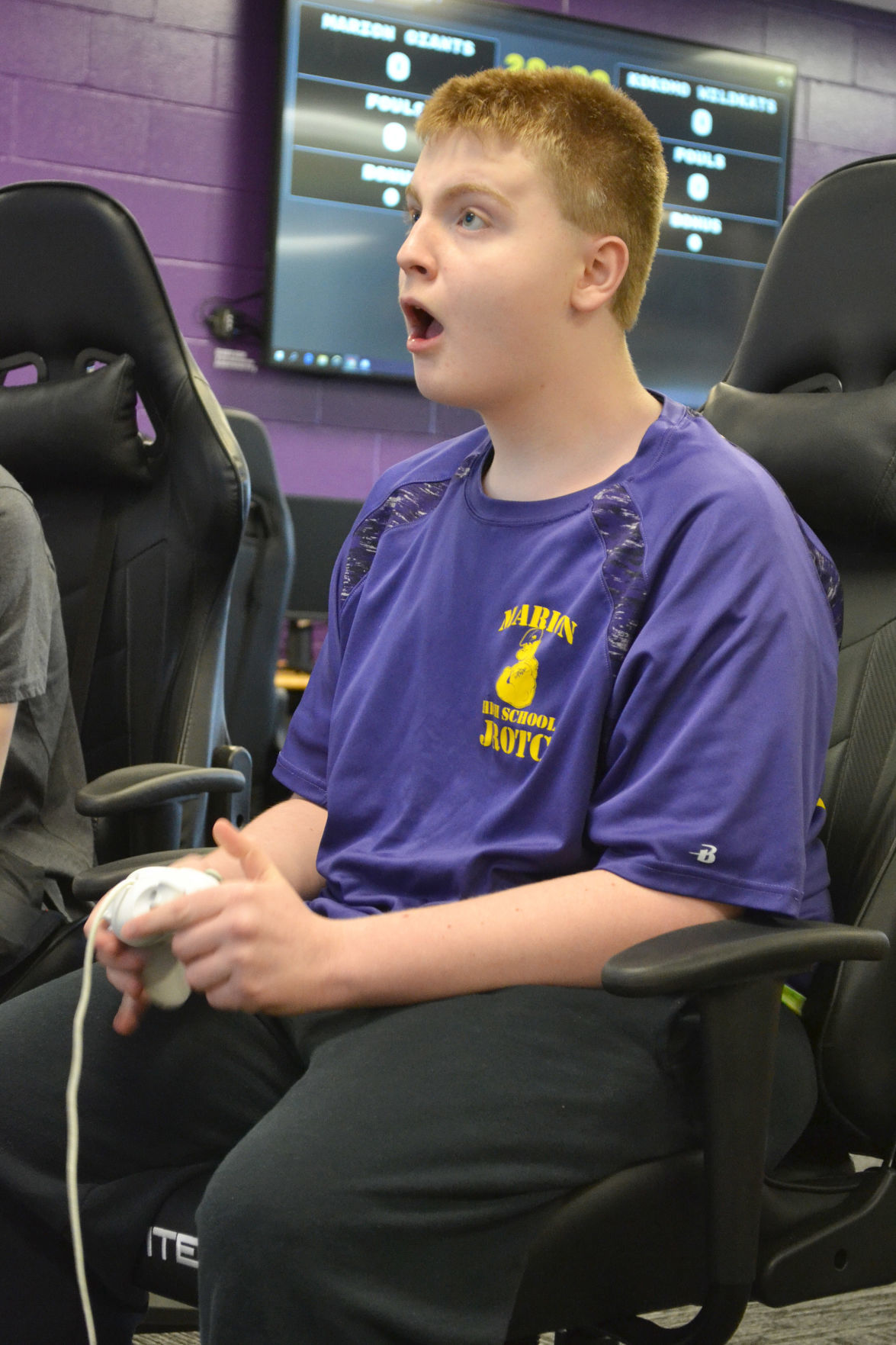 Michael Gibbs has his game face on as he plays Super Smash Brothers Ultimate against a remote Kokomo player Tuesday. 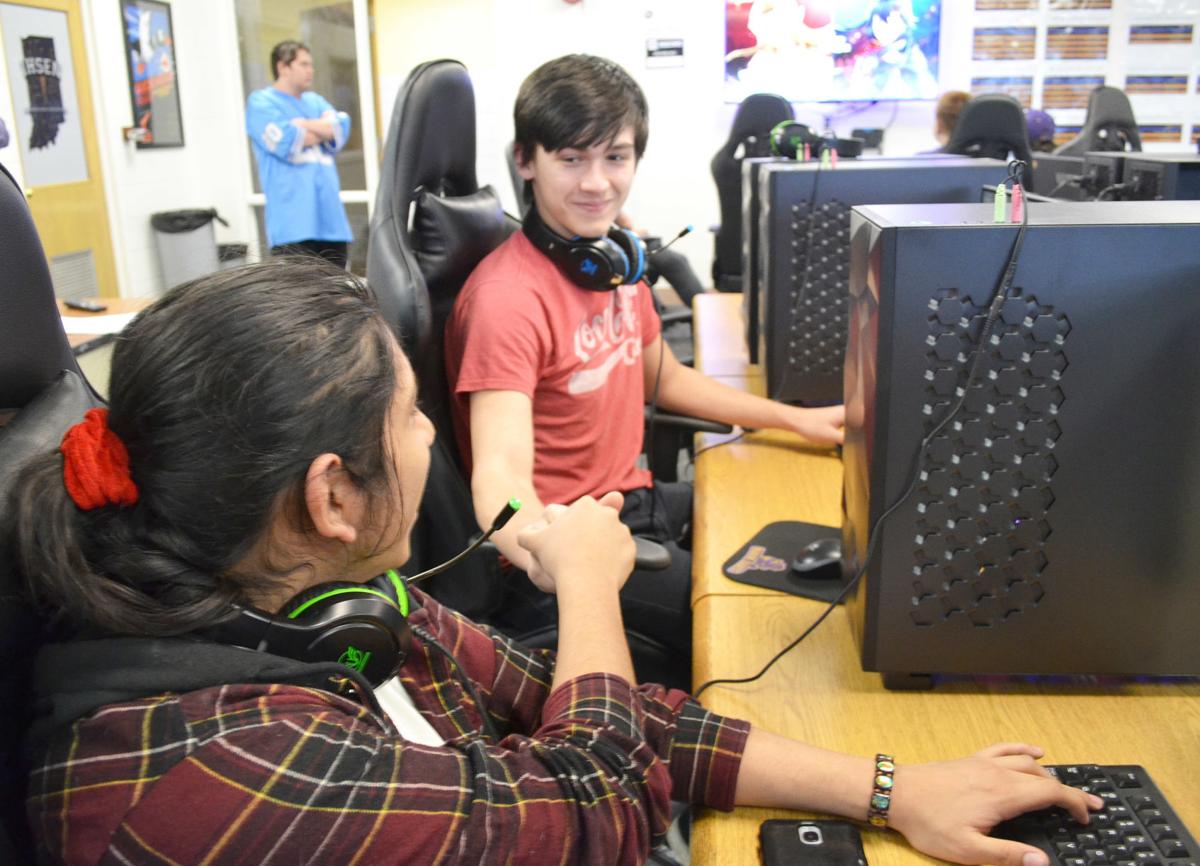 Zaih Collins and Anthony Fonseca congratulate each other on a good game of Call of Duty during e-sports practice Tuesday. 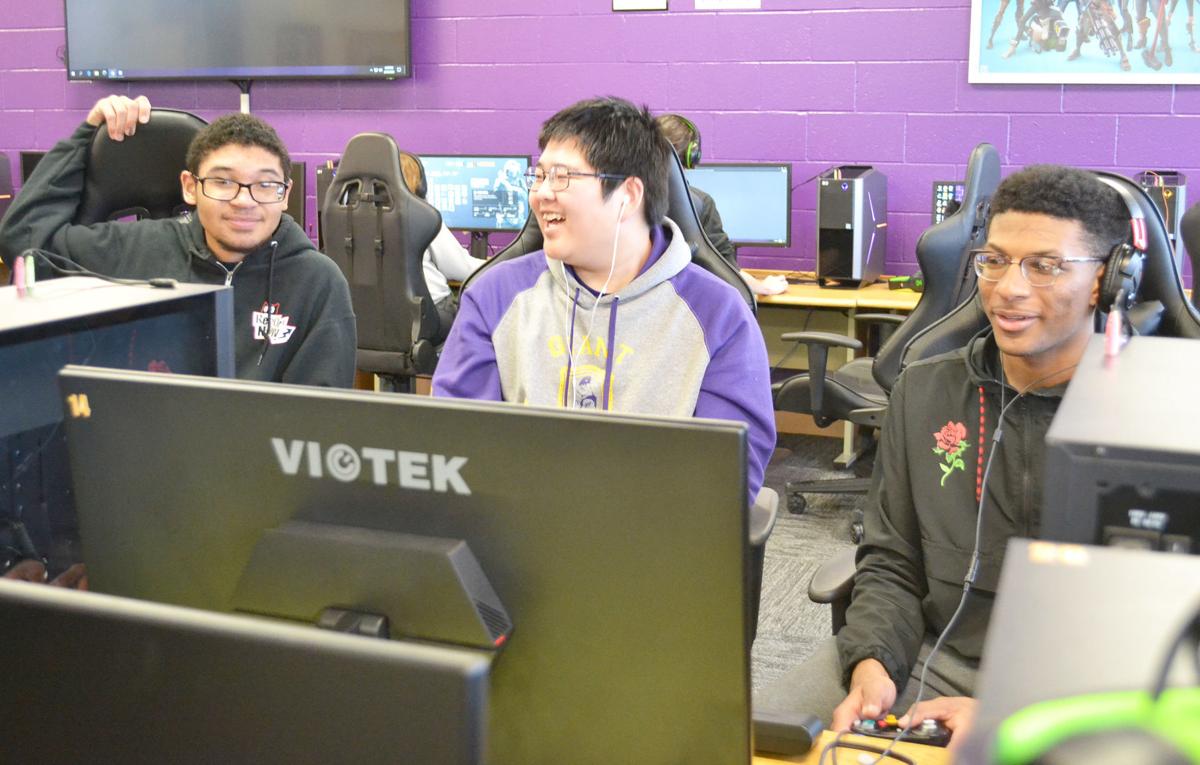 Zaih Collins has an enemy in his sight during practice at Giant E-sports practice Tuesday.

Michael Gibbs has his game face on as he plays Super Smash Brothers Ultimate against a remote Kokomo player Tuesday.

Zaih Collins and Anthony Fonseca congratulate each other on a good game of Call of Duty during e-sports practice Tuesday.

At Marion High School, e-sports is the great equalizer.

Athletes, gamers and everyone in between have a place to be themselves with Giant E-sports. Whether their goal is to compete against other schools or just to game with friends on fancy computers, the club has something for everyone.

“There are a lot of young minds around here who can express themselves in ways they can’t elsewhere,” said Bryson Adcock, senior and vice president of Giant E-sports. “Everybody deserves to have a place where they can be that. Everybody here is very accepting and you don’t have to be a superstar to be cool.”

The MHS e-sports space is a sanctuary at school for gamers, explained E-sports Head Coach Travis Hueston. The space features rows of gaming desktop computers, including 12 Alienware set-ups and 25 computers that students custom designed. Each computer is equipped with a headset and a high-back gaming chair.

Hueston said custom designing some computers was both a good experience for students and was a way to cut costs to implement the program.

“I love to save money when I can because I pay taxes, too,” he said.

For competitions and group practice, the room features five flat screen televisions, with each equipped with a Nintendo Switch or PlayStation 4 gaming system. During games, one flat screen doubles as the scoreboard, and party lights add a dash of whimsy.

Marion Community School Corporation renovated the e-sports space and purchased the equipment as part of a $70,000 investment in computer science at Marion Regional Career Center (MRCC). Assistant Superintendent for Business Affairs Robert Schultz said exact cost breakdowns for e-sports is not available, since it was tied into a larger project. In addition to e-sports, MHS also added an introductory computer science class for sophomores and freshmen at the career center.

Giant E-sports has also received donations from Afena Federal Credit Union and the MHS Alumni Association to make the team possible. The donors asked that the amount be kept anonymous.

MHS is part of the Indiana High School Esports Network, which was founded just last school year. Hueston, also the dual-credit computer science teacher for MRCC, said a growing number of Indiana high schools are forming gaming teams because it is a way to get youth more involved and more interested in computer science. In Grant County only one other school, Mississinewa High School, joins them in the league.

About 200 students in total are in the e-sports club at MHS, but only some compete. Players face off against each other to determine who qualifies to represent MHS in competition. MHS participates in league play for Super Smash Brothers Ultimate, League of Legends, Rocket League, NBA 2K and Madden 20.

Players face off in a digital arena that the host school sets up with a passcode for online play. Since schools play over the internet, there is no need for travel for most games. For example on Tuesday, the Giants played an “away game” against the Kokomo Wildkats where Kokomo set up the arena and both schools played in their own space.

Whether or not gamers chose to compete, teamwork, cohesion and making everyone feel accepted are the core tenets of e-sports, said Alexis Chaffin, senior and Marion E-sports president. While the games themselves are fun, Chaffin said the social aspect and the ability to have a home at school is the true value.

“To me it is more than playing a game. It is how I socialize and communicate with people and understand people better,” Chaffin said. “I think it has helped in many ways in my life.”

In competition and practice, team members interact through gaming chat application Discord. For some games chatting is purely for fun, but for multi-player games like League of Legends, teamwork is necessary because the players are working toward a common goal.

“The game encourages a synergistic approach,” Hueston said of League of Legends. “Students need to talk to each other and get to know each other. They get this team-building aspect that helps in life and business … If they don’t all work together we don’t win.”

Through the club, students like Chaffin have a chance to share their passion with others and grow in new ways. As a female president of a majority male group, Chaffin said she hopes her position can show other girls at MHS that they, too, can join and even lead what some would consider a boys club.

“Being able to spread things I love to other people is great,” Chaffin said. “I really want to get more girls into it too. If I can do something like this [being president], maybe other girls will feel more comfortable participating.”

Whether the team wins or loses, Adcock said the experiences they gained together will be memorable for all in the club.

“I hope we win, but certainly whether we win or not we stand as a group and fall as a group,” Adcock said. “I’m hoping we can really make some chemistry here and bring all of us closer.”