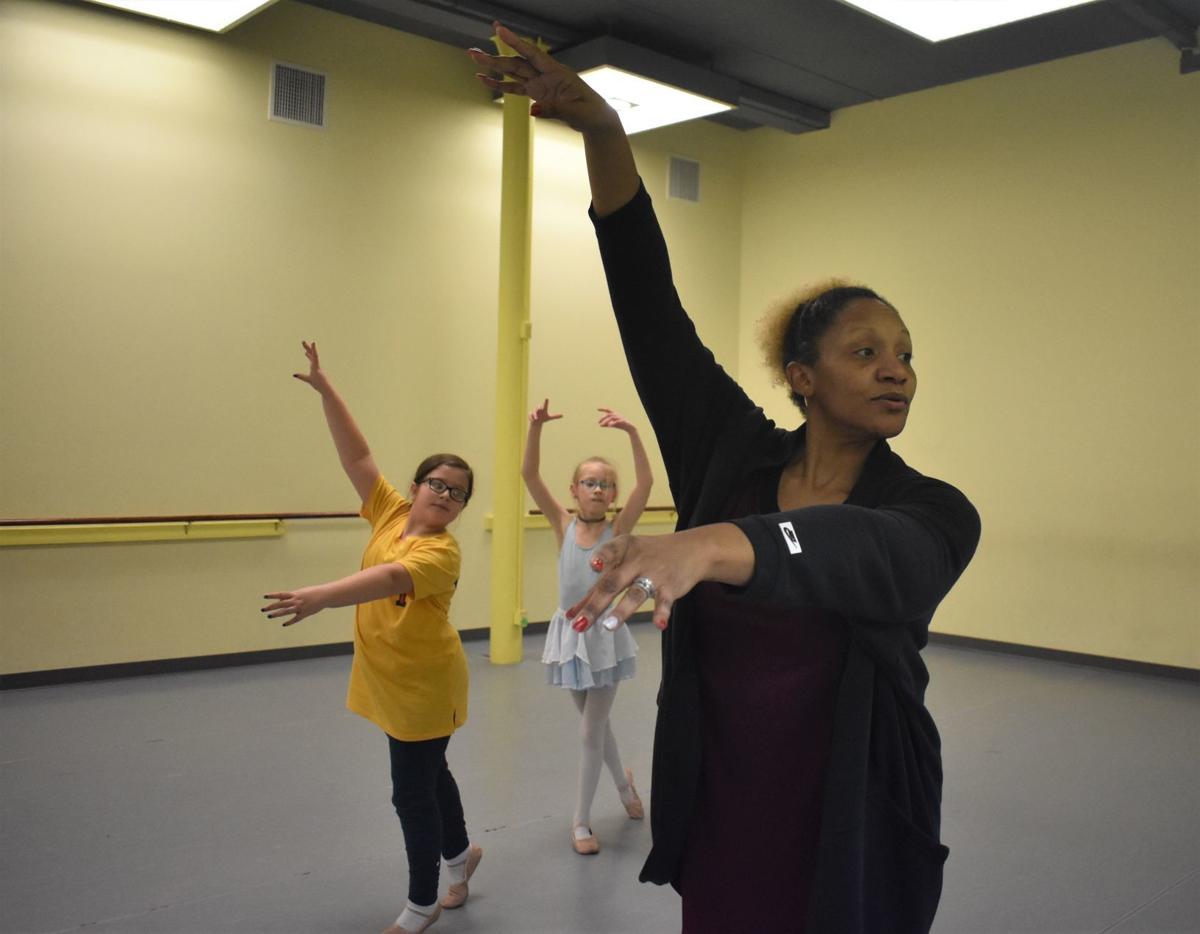 RaChelle Fears-Neal teaches a ballet class on Tuesday evening at Faith in Motion. 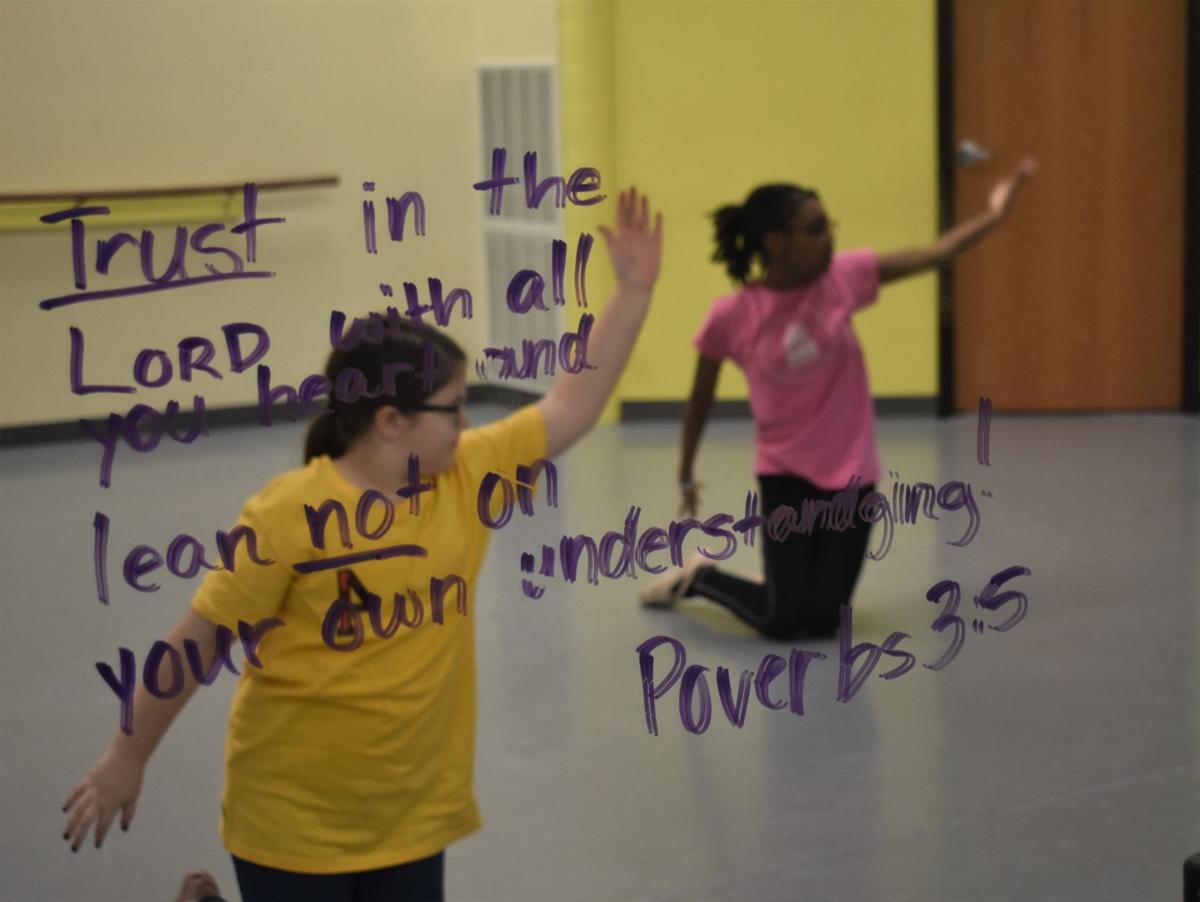 Bible verses cover the mirrors in the dance studios at Faith in Motion.

RaChelle Fears-Neal teaches a ballet class on Tuesday evening at Faith in Motion.

Bible verses cover the mirrors in the dance studios at Faith in Motion.

At the age of 3, RaChelle Fears-Neal’s mother put her toddler in dance classes so that her daughter wouldn’t inherit her two left feet.

“My dad would tease her that she couldn’t carry a beat and a bucket,” Fears-Neal said. “My dad had really good rhythm.”

Fears-Neal took after her father. On any given day throughout her childhood, one could find Fears-Neal at the dance studio till 9 p.m.

“I just loved it. I gravitated towards it,” Fears-Neal said. “That’s all I ever did.”

Today, Fears-Neal is the owner of Faith in Motion dance studio in downtown Marion.

“I thought that was all it would be for a while, but doors just kept opening to actually have a full-fledged studio,” Fears-Neal said. “That’s where God gave me the name Faith in Motion, from Hebrews 11:1, ‘Now faith is the substance of things hoped for and the evidence of things not seen.’”

Fears-Neal said she’s always wanted to own a dance studio but had no idea it would be faith-based.

“I got saved in 2000. It was just a pivotal point for me when I had to decide which master I would serve,” Fears-Neal said. “That’s when I stopped doing secular dance and just started full time using Christian music.”

Faith in Motion offers tap, jazz, ballet, hip-hop, pointe, modern and a genre they call “divine,” or praise dance that one would see in churches.

While Fears-Neal acknowledged there are four other dance studios within walking distance, she said she likes to think that Faith in Motion is not in competition with the other studios because they are the only faith-based studio.

“Life is too short to have that gritty competition. I want to be the best that I can at what I do, and if I have to stomp on someone to get there, it’s not worth it to me,” Fears-Neals said. “If it’s important to use your body and dance as worship, then we’re the studio for you.”

Dancers at Faith in Motion do not currently participate in dance competitions, but Fears-Neal hopes to begin competing soon. The studio hosts a yearly dance recital and performs at many churches and events such as the NAACP Freedom Fund Banquet.

As a young dancer, Fears-Neal performed at NAACP banquets because her parents were heavily involved in the organization. She also danced at funerals and weddings, she said.

“In our culture, we dance for everything, which is the same for my family. We turn everything into a party,” Fears-Neal said. “For me, it’s just a big part of my life.”

When Fears-Neal has a bad day, when she feels stressed or when her husband or kids get on her nerves, she said she dances.

“I can come into dance mad or in pain, and when I hit that floor and start moving, it’s like everything else in the world shuts off,” Fears-Neal said. “Even when I am not able to articulate what I am feeling, I’ve always been able to move it out, dance it out.”

Pointe is Fears-Neal’s love, she said, but now that she has had knee surgery, she cannot dance on pointe.

Fears-Neal said a lot of times it is a big deal for people to see a black woman be a studio owner and dance teacher.

Fears-Neal said her son did not have a black teacher until he was in fifth grade.

“That totally changed his life, to see someone other than his mother that was in this position,” Fears-Neal said. “It makes a lot of difference, and I don’t take that lightly.”