If you need to purchase a subscription.
You have permission to edit this page.
Edit

No matter how divided the country may seem as the presidential election looms over us, we have a lot to celebrate on July 4.

This country was built by immigrants. We are a melting pot of culture that is envied by the entire globe.

The times we are in may seem tumultuous, but great change comes from times like these.

For instance, one of the main tenets our country was founded on was the idea of freedom. While our founding fathers wrote “all men are created equal,” it wasn’t until much later that this sentiment became reality.

At the time our country was founded, women and minorities did not have equal rights. The times we are in currently show that the fight for freedom has no end. Our country is constantly evolving, and as more and more groups fight for equal protection under the law, things will continue to change for the better.

A few weeks ago, members of the LGBTQ community got a sense of freedom they’ve lacked for decades. The Supreme Court confirmed just weeks ago that the monumental provisions of the 1964 Civil Rights Act protect gay, lesbian and transgender individuals from being discriminated against by their employers based on their sexuality.

Until that decision, the LGBTQ community lived in fear of being treated as inferior, but now they enjoy the same freedom from oppression as many other groups have enjoyed for decades.

When looking at the timeline of American history, it’s important to note how many American citizens did not have true freedom until nearly 50 years ago.

Even today, some Americans do not feel that equity has been fully realized, and as Americans it is our duty to listen to them so we can make the country and world a better place.

We do not always agree, but as long as we continue to believe in the principles that built this nation, this country will continue to be the model for the rest of the world.

As you spend your weekend celebrating our great country, remember to take time to thank the members of the military who continue to fight for the greater good. Thank our current and retired service members, and spend some time in thought, or prayer, thanking all of those who fought and died for freedom.

This weekend, put your politics aside. Engage with strangers, and celebrate freedom.

Step outside of your comfort zone and make someone’s day through an act of kindness. If we all make a strong attempt to do this, we will find the true reality of life: we are all one in the same.

We are all far more similar than we are different.

Our nation is still unified under a just cause: equality for all. 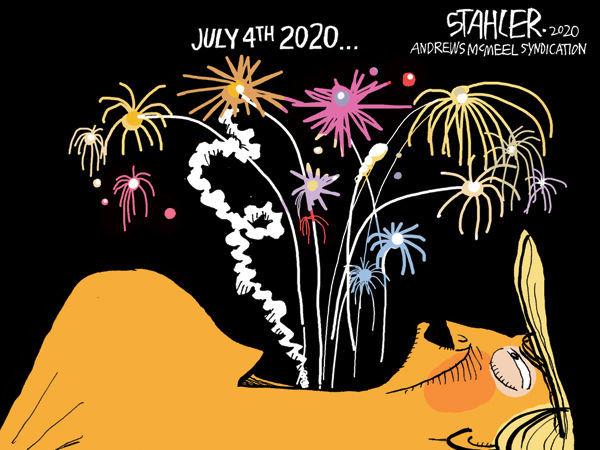 Opinion
We all deserve to live free, without oppression
By Wesley Rediger
07.03.20

July 4 celebrates American independence. We all want to be free, yet we continually struggle to include all Americans.

Our nation is founded on freedom from oppression. The founders knew the oppression of class systems in Europe where the privileged and powerful few oppressed the powerless masses.

They founded the United States on the idea that equality and liberty are the essence of being human in every human being everywhere, ever.

But the reality was that it was not for everyone. The ideas of equality and liberty and justice had to survive in the reality of slavery, lynching, Jim Crow, red-lining, segregation, whites-only facilities, unjust imprisonment, legally protected rape and theft of property, Klan raids, church bombings, and on and on.

But freedom from oppression is still good and right.

The second foundation is the right to worship God our own way. The first amendment protects the freedom of religion, speech, media, petition, and assembly.

“Congress shall make no law respecting an establishment of religion, or prohibiting the free exercise thereof; or abridging the freedom of speech, or of the press; or the right of the people peaceably to assemble, and to petition the Government for a redress of grievances.”

There are two reasons for freedom of religion. First, governments and laws have no access to belief, only to behavior.

You can force me to behave by threatening to punish me if I do not meet your demands, but you cannot make me believe.

The founding fathers knew that a Christian nation was an impossibility; an inhumane and ungodly concept because the law has no access to belief, only to behavior.

The second reason for the freedom of religion is what became known as the Golden Rule, in every major world religion.

The 4000 year old Babylonian Code of Hammurabi states the primitive fore-runner to the Golden Rule – an eye for an eye and a tooth for a tooth.

As civilization matured, it went back to the drawing board and made it proactive.

“Do unto others as you would have them do unto you,” is in ancient Egyptian literature, Greek philosophy, Chinese Confucianism, Indian Buddhism and Hinduism, the Jewish Torah, Christian Gospels, and the Islamic Qur’an and Hadith, in that order.

Did each movement copy an earlier movement with Christianity next to last? No.

The Golden Rule rises from human equality and liberty in the essence of every human being, everywhere, ever.

We all know we have inherent freedom of religion and with maturity, we recognize it in others also.

Freedom from oppression and freedom of religion are the heart of Independence Day.

They are the reason we fought and won the war of Independence from Britain.

And then the next generation of Brits tried again.

The war of 1812 afforded us our National Anthem. The poem, titled “The Defense of Fort McHenry,” states: “… may the heaven-rescued land Praise the Power that hath made and preserved us a nation … And this be our motto: “In God is our trust.”

We can sing it, but we cannot legislate it.

In Psalms, David writes that we need divine protection to have true freedom.

“In the morning, O Lord, thou wilt hear my voice; in the morning I will order my prayer to Thee and eagerly watch. For Thou art not a God who takes pleasure in wickedness…The boastful shall not stand before Thine eyes ... Thou dost destroy those who speak falsehood,”

In Galatians, Paul writes, “God is not mocked… For the one who sows to his own flesh shall from the flesh reap corruption … So then, while we have the opportunity, let us do good to all men ... ”

In other words, quit picking at your fellow Christians just because they don’t think and do everything the way you would have them think and do.

But be thankful for what they do that honors God; and they may encourage and thank those who think we don’t need any improving.

Independence Day is America reaffirming the core values of our nation, reckoning with the difficulties of today and tomorrow, confident in hope in the future that each of us is building with our thoughts, words, and actions.

We are building America in our talks at the kitchen table and at the convenience store, as much as in the government buildings in Washington DC.

Freedom from oppression and freedom of religion! Happy Birthday, Americans!